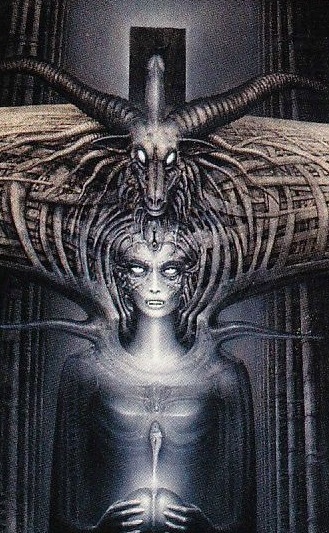 Day of Observation: Upon the Nativity Anniversary of the High Priestess of The Church of Satan. Appointed by Magus LaVey. ∞

"Square: A person who is conventional and old-fashioned."*

There is an odd attitude among some vapid parentage, perhaps seeking paltry bragging rights, to urge offspring into such recommended pretentious, generic professions like doctor, lawyer, counselor, social worker, even "president", & other public servants, etc., which more often than not, are hypocritical, hackneyed, static, and engender misery, on both sides of the spectrum. Fostering an overwhelming concentration on others' issues, problems, etc., seldomly fully addressing one's own, with only perhaps a day, if that, for respite, and otherwise "vacations" granting the illusion of freedom until returning to be trapped in an office.

As necessary as they may be, in an almost subhuman-like manner, I never met a lawyer, social worker, counselor, et al, I didn't distrust. For they are on a false prescribed path foreign to The true Self. The attitude taken more often than not, is the proceedings are but a game, going through the motions, with little concern for the people employing them except as mere impersonal "clients", treated like pawns, or just pieces in a redundant contest. Ergo, "even though tricksters make the law, justice is served by fang & claw!"

Needless to say, these do not even 'make' the 'law', but are themselves mere pieces in a stale game being puppeteered, rather than acquiring actual justice.

Unfortunately, much the same is increasingly being seen in other professions as well, from incompetent practitioners being placed in undeserved positions who are essentially only there because they were a 'token student' {due to race, religion, disability, mental condition, and other such crutches, etc.}, undeservedly passed by nepotism, pity, or "donation" bribery. Fecalitarian allowances for failures or the unprepared to perpetuate the degree mill. Religiously-based and fly by night 'schools' & 'colleges'. A true "shit on a shingle"! This only goes to foster a de-evolution of the culture & profession, and justify mediocrity.

Exaggerated expectations in professions that the person was probably pressured into by family and overall societal projections. Mostly just for money and selfish proclamations for impoverished egos. Like the garbage man or janitor, somebody's gotta' do it I suppose, but unless that is your "calling" as it were, why would you purposefully want to?

Commonplace responsibilities, as petty as they may be, are necessary to maintain a civilized existence, but are certainly not the be all end all. Shaolin monks are taught to keep the temple and dojo clean, as Karatekas & overall Martial Artists as well should, as a form of discipline, respectfulness, and self-respect.

Calling Dr. Bombay! Come right away! Also relates to those afflicted with Samathitis. Magical people should never mate with the non-magical {muggles}, for as such would be a concept of being "unequally yolked", but are for play, and mutual indulgence. To each their own.

To make a true difference by one's own path, wherein true satisfaction and a reason for living is experienced, is through one's own merit entirely. Utilize nascent talents accentuated by The Arts, for to be the originator, the creator, guided by that voice within, The Daemon, leads to completion.

Follow your bliss. True success is fulfillment. What did they wanto be when they were little children? What filled their minds with fascination and were always indelibly drawn towards? Follow our heart, not pocketbook. When you do what you are naturally drawn towards, the needed finances will follow as a course of kismet. Wherein one may enjoy one's riches by the totality of Oneself, not a facsimile thereof. Probably not by commonly conventional means, but the universe always finds a way to propagate creation, and by extension, the creator.

"One cherished child who can create will be more important than ten who can produce - or fifty who can believe!"

_____________
* Foursquare: Hopelessly brainwashed blindlighter double-squares. Men are merely utilitarian and the women are prude stepford wives. Both commonly hypocritical with pretentions of accomplishment through artificial paid degrees, and their ignorance of the subject shows! Overall breeding incompetence and repression! Cultivated stupidity through guilt-complexes masked as "knowledge", or "word of the spirit" nonsense. 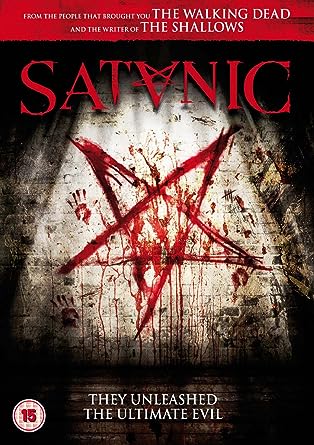 Parapsychological thriller. The film begins with footage from the 1st Satanic Wedding, followed by lokian imps emerging from the fetters of timelessness...

Cut to a group of pretentiously obnoxious 'college' tards consisting of 2 posers & 2 generics, go to LA in search of an 'occult adventure' of sorts, and for their masochistic meandering, really receive a deadly one! Starting with observing a mysterious shadow up in the window of an abandoned building while driving around lost.

Among the stops on the list, Cielo Drive {"Manson Family Murder House"}, Satan's House {looks familiar... sporting a hellegant inverse black cross, from which emerge 2 spiteful goths annoyed at the touristy intrusion}, an occult shoppe reminiscent of Panpipe's, and finally a haunted room in the very hotel HelLA {reminds of The Cecil}, where the urban legend of an allegedly so-called "priestess" Laney Gore of "LaVey's Church of Satan" {sic} excarnated, leaving a bloody pentagram drawn on the wall in her wake. The Ouija oracle is employed for æthyric communication by those unskilled in its application.

After being ejected from the shoppe, wherein they were disrespectfully prying & being deadbeats, they decide to spy on the proprietors, following them to the Pacific Palisades / Rustic Canyon & Malibu areas, trespassing wherein a private ceremony is taking place. Upon predictably misunderstanding the proceedings, are spooked and are run off the property, dropping an incriminating phone behind. It's returned by a street urchin that was in attendance - actually a pretty girl with nowhere to go, so they decide to invite her back to the hotel room.

Upon salacious indulgence, it's revealed that she's actually quite knowledgeable and skilled in some 'hardcore' occult practices, and otherwise becomes possessed by Laney Gore, wherein it is subsequently divulged that she devil marked each and every one of them for destruction by her offering, established by adjoining all by the circle, drawing an infernal gateway I II III ⛧ IIII IIIII whereupon each meet their doom as the night and day progresses, all ending where they started in an infinite labyrinth of terror. Shadowmantically, to each their own nightmare. [4/5] ∞

Presented in a noiresque style, narrated by a hardboiled grizzled investigator characterization, Ramirez's slayings are recounted, "13 Sacrifices for Satan"*. Primarily asians and old ladies. Nanas?! or the 'gmilfs' {Skwisgaar}. [*SH*] The asians were an obvious ECI from listening to uncle Mike. After raping and killing, he would then often fix himself something to eat, and leave. ∞
_____________
* Obviously, sacrifices are conducted symbolically in the form of a Curse upon those deservedly punished to attain justice, personally administered. [see "On The Choice of A Human Sacrifice"; The Satanic Bible, LaVey.

Coasted "Technologies on the edge" with guest Jenny Kleeman with an interesting conversation about AHC's {sexdolls, androids, AI} and deathpods {suicide machines}. The latter which can now be printed, and doubles as a coffin!

That's LaVey's propositions as part of Pentagonal Revisionism for the implementation of AHC's for mental, sexual, physical well-being & practical applications; and My recommendations to legalize euthenasia, par one of the stanchions of Dæmonocracy {along with prostitution & narcotics - 1/3 so far! The rest will follow}. While one may not partake of such public facilities, these outlets should be available to society in a social darwinistic sense, as well as erotic fulfilment for those to whom it may be the only option, thusly secured in appropriate areas. People should not be protected from the effects of their own stupidity. Responsibility to the responsible.

The former has now reached a point where the interactive capabilities have evolved wherein one may actually carry out a conversation with one, inclusive of various salacious content as well as educational output if so desired! I Am reminded of the Den of Iniquity scene from Speak of The Devil.

The latter spearheaded by Dr. Kervorkian {Angel of Mercy, Pioneer of Death}, which I've always been a proponent of, though more in a misanthropic sense. In other words, anyone who chooses to do so, will have full opportunity to do so.

The consensus of the guest was that these androids may take away from the human experience, though as Satanists, we tend to prefer quality company to that of 'community' herd mentality. Most times a significant other, or a pet, familiar, even an object, is more desirable than common humans. Any interaction with common herd tends to be of a selfish nature only.

"Birthsacks" were also discussed, which would allow a host to grow a foetus outside the womb, and the idea to grow meat with stemcells where an animal need not be slaughtered. This technology has already proven beneficial in growing organs, where soon an entire body will be produced utilizing stemcells, wherein consciousness may be indwelled. Otherwise the perpetual regeneration of an existing body. This complements certain principles of immortality & Vampirism, Apotheosis, like Alchemy to Sorcery. ∞

In the wake of 'Setmas' with the 1st storm of the season, 'neath the 13th moon radiant framed in fog, the Draegon's breath, The Hellmouth Gates receive a SatanMe summoning!

6. Midnight Black Pentabolt medallion: Hellegance, stealth, shadowmantic pendant. Power Symbol of The Black Flame of The Will & Satanic Might!

6. Pentabolt magnet: Perfect accent to just about any surface, especially Beelzebub's Throne! Asserts pride & strength complementing The Lair! As for Me & My House, I shall serve Myself in Satan!

All accompanied by several baddies like stickers and postcards of The Black House on cemetery lane watercolor, LaVey enthroned, among others. ∞ 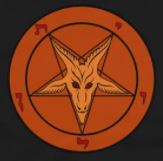 𖤐 LaVEY LEGACY: Founding Black Pope, Dæmon of The Church. The iconic image from the reverse side of The Satanic Bible. Large full print.

Overall, ideal for casual wear, beneath the suit, weightraining, general, and/or gi accompaniment. ∞ 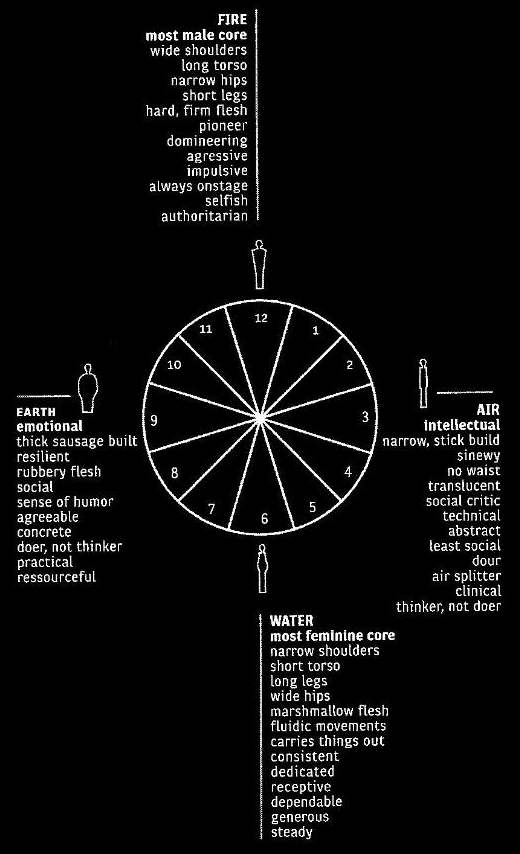 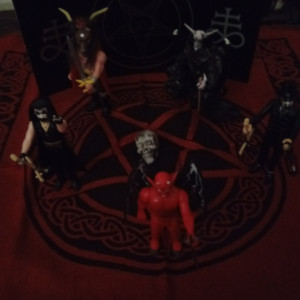 Supplementing The Mascots of Evil collection with these recent forgings from The Abyss {to accompany ϟLAYER ⸸ Mercyful Fate King Diamond]. Each serves to enhance the atmosphere and increase the innate overall psychodramatic nefarious energy of one's Satanic environment! Like a combination Lock principality of Hell!
The concept of resonant effigies, thoughtform possession permeate these ancient Sorcery secrets unto themselves, and for our kind are instinctual and empowering!
Each are comprised with Kennermatic composition for desired arrangements.