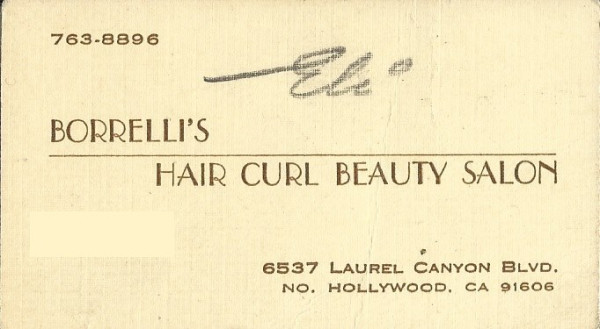 It was originally owned by a cranky old lady who seemed to despise Me {or perhaps all children}, and gave Ma a hard time over it - until one day it came to head when I accidentally walked in on her using the bathroom, which she had the door open on, and remarked to Me, "You seen enough?" then slammed it, and I ran out of there out to My usual places like the Woolworth's or May Company to play video games, browse the toy section, magazines, or just watch some TV - sometimes over to Thrifty's for a triple-decker ice cream cone of strawberry, rocky road & vanilla, then on to Earl's Toys & the UA theater. I believe she originally wanted to fire Ma, but the other employees signed a petition to keep her on - then the owner sold the place to the Borrelli's, which turned it into the really classy establishment described below. 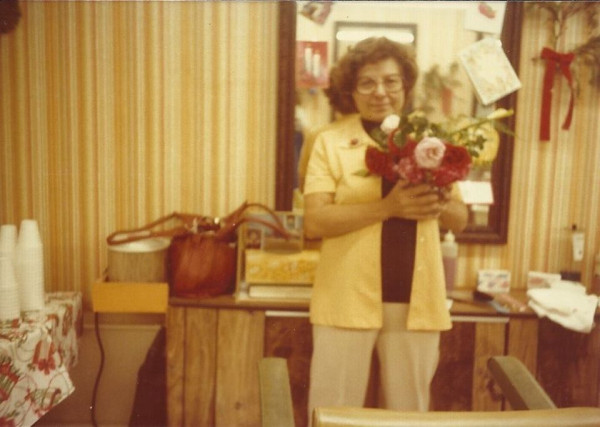 The Dracling would enter therein and knew all the names of the employees, often mentioning and motioning while moving down the aisle... Steve, Carol, Terry, Rudy, Joseph, Eva, Eli... Of course, My mother worked there being Eli, with her close friend Eva, there was Joseph, Carol the owner's daughter and her dog 'Spunky' {an odd cross-breed of two of those snappy, irritating little lapdogs}, and others. 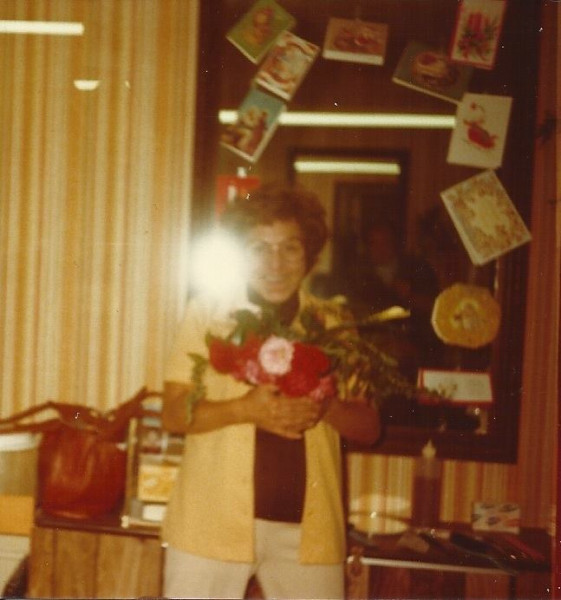 Note the gentleman in the reflection is one 'Joseph', or "Joe" - quite a character, a gruff sort of fellow who stayed on working here through the transition from the previous ownership who ran the place more like a barbershop. He worked out at Rocky's Fitness club where I'd see him from time to time. Interestingly, he did not happen to have much on his topknot, but had his barber specialties, and was referred to when men came in for a simple cut & shave.

Joe would playfully tease Me about My "Gijamas" whenever he'd see Me in My gi. It was an amusing repartee'. 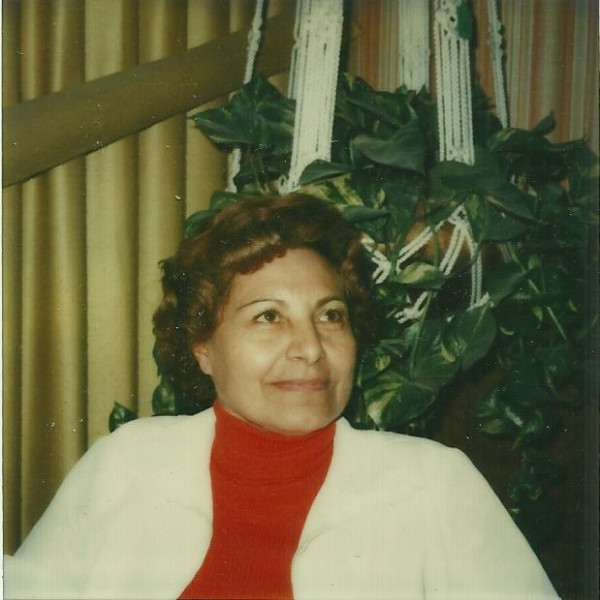 You can tell the nice environment from this photograph. Note the hanging planter, & lush velvet curtain.

Memorably, Carol once became very aroused when I showed off My muscular thigh development, even mentioning to her brother that it was "making her wet". That was complementary, as I have always also had well-developed legs. She was a thin young lady who had a sort of stylized hairstyle reminiscent of Pat Benatar. 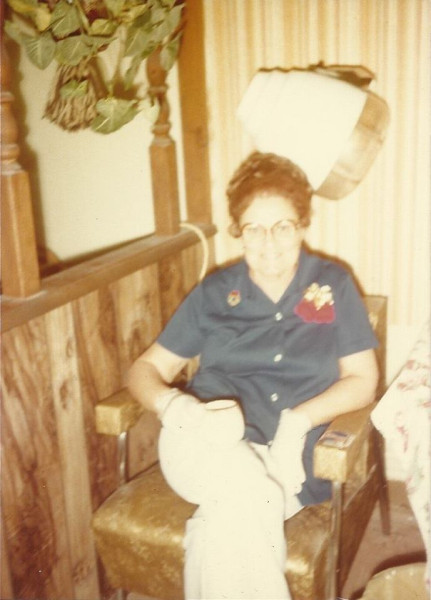 Eva, a classy lady, was Eli's best friend here - they would often kibbutz all day long about this and that. During breaks, she would often retire to the back room for a smoke and coffee. She was almost like a second mom to Me, and cut My hair on a few occasions.

What is this, a freakout?

I also quite vividly recall a lady resembling one Lilith Sinclair entering Borrelli's once for a set & tease, who was intently staring at Me via the mirror the entire time I was seated therein. I eventually left after a little bit of return treatment, and because it was rude. In retrospect, she may have been attempting to draw energy from Me. 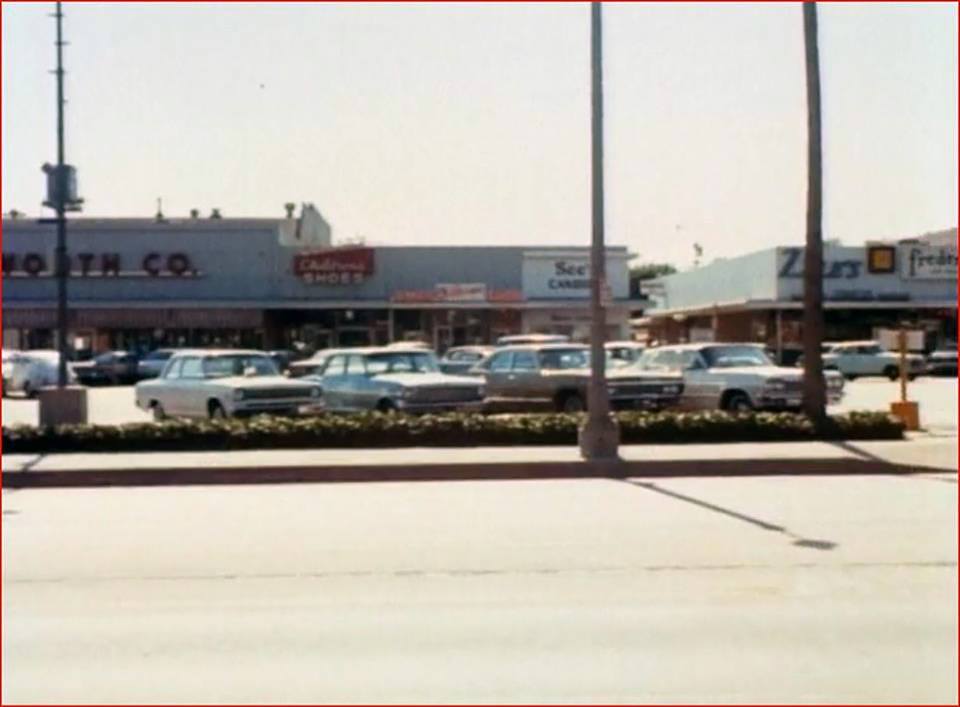 As a side note, a bit of trivia on the property's rather sordid history, is that it actually used to be a Frederick's of Hollywood. See in the photo exactly where Borrelli's was located. To the left, See's Candy Shoppe & Woolworth's. At the end of that central alleyway on the right was a diner I would frequent for the freshly-made cheeseburgers and fries; nicknamed the "Olympia Diner", those guys really embodied the SNL Cheeseburger skits.

We moved to the San Gabriel Valley shortly after the owner was arrested for propositioning an undercover officer for homosexual relations outside a gay club for money - he also happened to be the Principal at a Catholic High School.

I spent many hours in the back break room playing with My plethora of action figures, wherein I created My own scenarios and sound effects to the point where people thought that there was a television back there.

I remember the table containing sutures on the surface, securely keeping the cover on, the hairspray & smoke-filled air, and the Reader's Digests perpetually available for reading abouts in there. When first arrived, it was owned by some grumpy old lady whom I accidentally caught using the toilet, since it was her peculiar habit to leave the door open - her fault! She despised children anyway, but it seems that this was a catylist to change management to the Borelli's, which then upgraded its operation exponentially in aesthetics and clientele. ∞