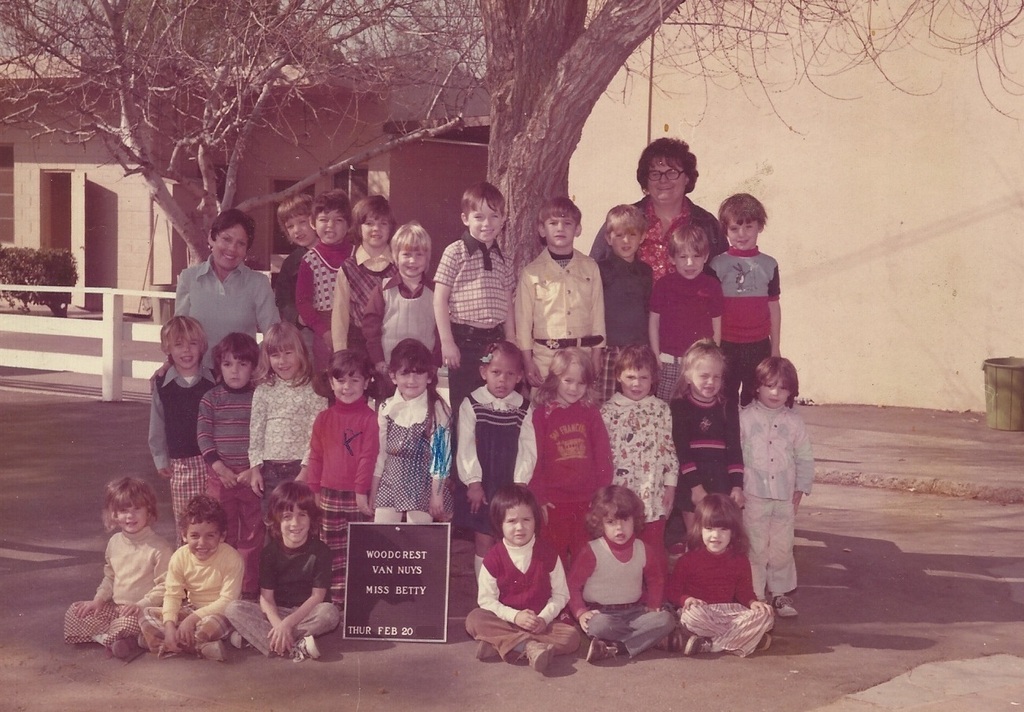 Don't recall too much from this school except that corporal punishment was in force here, with parental permission, as it should be. Indeed, I remember being subject on one occasion, and that's all it took to remain well behaved after a couple of strange incidents. There was nap time upon cots which was preceded by milk & crackers. The cartoon "Hercules" reruns were big, and everyone would look forward to it, then out to the yard to act out some of the scenarios.

That's Paul Young [TR,5L] who would also join Me in Y Camp. At first, we were pretty good friends, but unfortunately, we eventually ran afoul due to a lawn dart incident in the back yard at his house, and his subsequent stepping upon a long shard of glass at the beach. For some reason, he was insulting Me at the very moment; I laughed as he was wheeled into the ambulance. Never saw him again after that.

That poor girl in the red sweatsuit [2R,7L] had an infatuation for Me; but became the subject of a psychotic episode involving poking hard with a stick in a quiet time on the yard. Probably some sort of subconscious misdirected reaction to mutual sentiment. ∞ 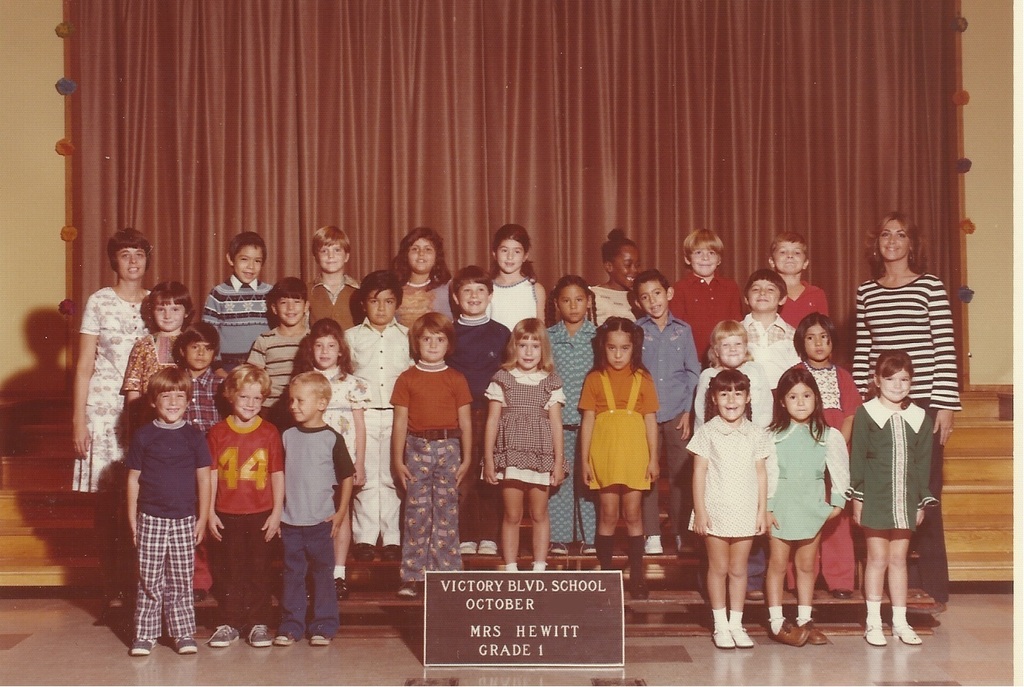 Of the Kodachrome: A Lokian presentation - I had conspired with a few associates to express their most comical faces. As the black girl looks on, I in the center, behold the 2 boys behind Me & the girl before Me to My right. Amusingly, I do look like a proud little devil.

A thin lady with short hair and a very likable demeanor. Mother would kibbutz with her from time to time and give her a box of See's Candy Chocolates as a first day gift, which may have buffered a couple of situations due to questionable behavior. Being a natural Witch, seems the Draconian Ovum Matriarch is quite proficient at Lesser Magic as well. They actually had pleasant conversations on a bench at nearby Valley Plaza park* while I played.

For some reason, I relayed to her that Mother liked to "eat bones" as it were, that is to say, thoroughly remove the flesh from a meal, including all edible portions such as marrow and cartilage. Perhaps at the time I thought that the only flesh that should be eaten was that apparent, but I certainly learned better, considering now I Myself Am quite thorough removing all edible portions from bones, including marrow, cartilage, and even sometimes sections of softer bone.

As an aside, a disturbing story: That was the same park in which I apparently assaulted a traffic cop as a Dracling in order to prevent him from giving My mother a ticket. I remember kicking his boots and raising a big fuss like a little hellion. He ended up just letting Mother go, probably not considering it worth it. All Mother could do is shake her head in disapproving disbelief.

Additionally, I do recall eating oatmeal crackers with milk or juice during recess in her class. ∞

_____________
* The very park that has a secondary 'hidden' 'haunted' park accessed through a tunnel covered in thick foliage. I took part in an action-adventure home movie there with the Y, wherein I was a "bud guy" who was in a running gunfight.
Also the park where I veritably 'blinded' someone in a Luke Skywalker costume on Halloween night while dressed as Darth Vader with the far end of a lightsaber tube. That was My Sith "secret" to victory - at some point during the 'battle', I removed the very tip, and proceeded to point it directly into the opponent's eyes, thus granting the advantage while I struck the final Victorious blow for The Dark Side. 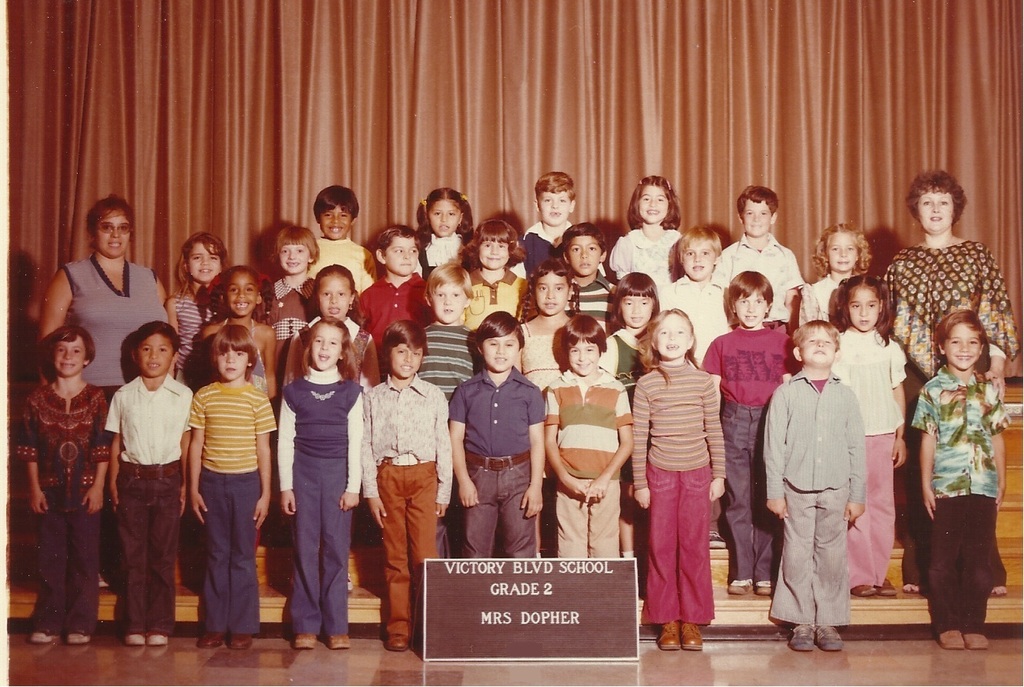 The Devil in Red

There's Brad and April standing next to eachother in the front row! That's Julio down by the schoolyard in the front row center. There's Vinnie third row, third form the left - always impressed Me as rather paranoid, somehow. We would be classmates again in 5th grade. Also, gotta' love the kid at front row right in the Hawaiian shirt. Aloha!

A very nice lady. I recall her wearing all this cool flowing veil-like clothing with interesting patterns and designs. Looked very comfortable. ∞ 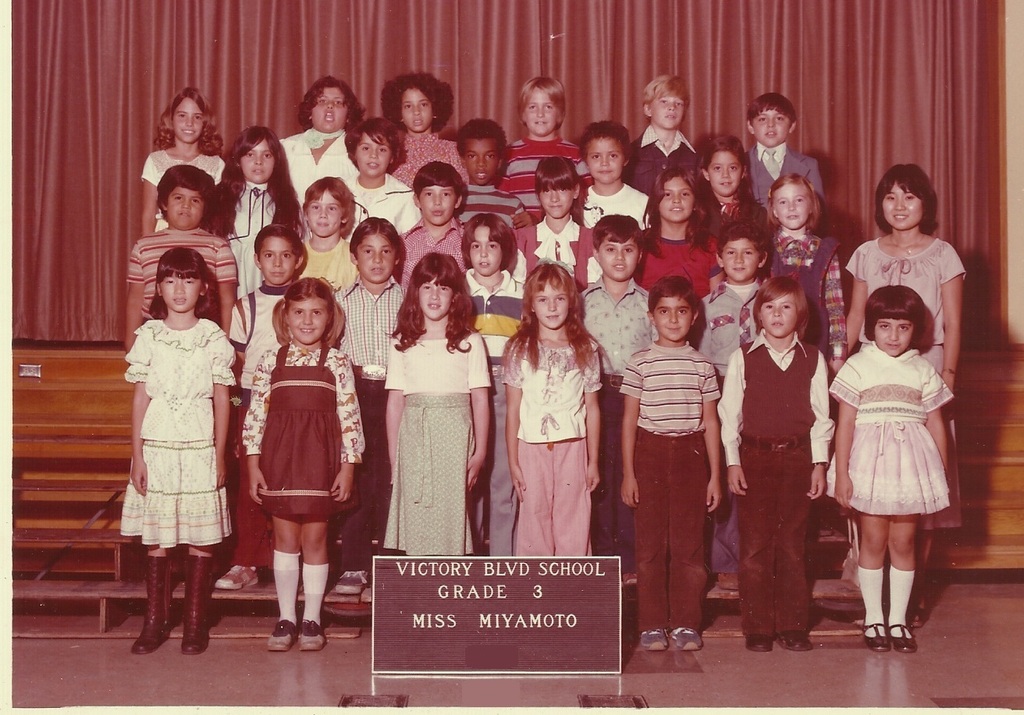 A cute little Asian teacher who really took a shine to Me {and I to her}, encouraging My various extracurricular projects, including a comic I created entitled "The Protectors" which related the adventures of a group of superheroes who travel to Hell and meet Satan, a giant demon lord. She shared this with the class. Her style is to have students read each other's creations, which is actually very good for morale and pride, as well as a motivating factor to create an optimum finished product.

I do recall an odd sort of 'rubbing elbows' incident I had with an attractive female student, in which we apparently became quite stimulated by the friction between our skin. It started as whose arm gets to rest on a side table, and turned into b/humping the other's arm off, and on into this odd rubbing episode. The massaging sensation was actually pretty nice. Of course, we faked adversity, and were separated, to our mutual regret. Ding Dangit!*

At some point, I thought the term "The Pupil People" was strangely interesting, as I envisioned humanoid beings comprised of eyeballs sort of skulking around, rather like the band The Residents.

I also met Shane in this class {that's him cross-eyed in the photo 3r/2l} through getting out of being thrown into a pool in a makeshift "swim class". For whatever reason, the school saw fit to bring in a large portable pool so that students could learn to swim right there in the yard. I wasn't too thrilled about this, and snuck around the side into the pool instead of being thrown in like the others had been by the resident negro "lifeguard".

We thought is was funny to just do the grossest things we could think of, from mixing all contents in the lunch tray into the milk carton and eating it, to telling disgusting jokes. - it was a [thankfully] temporary weird 'slob' phase. Perhaps the notion was intriguing considering I was brought up in clean, neat, organized, elegant surroundings. We actually had velvet burgundy wallpaper with black velvet embossed filigree, and wonderfully-framed ornate paintings on the walls, many of which are painted by the matriarchal progenitor's very own talented hands - I actually have a couple of her painting displayed upon these walls.

Anyhow, as related here, that friendship ended when he left for swampy Florida with his mother after I had threatened to tell the Police about how she beat him on a regular basis should she tell the Police about our little misadventure in the rain, when we went to go visit another 'friend' one late stormy evening, after which she called Me "The Devil". It sure was invigorating racing on My bike through the streets with rain pelting and lightning flashing and thunder rolling!

I even gifted him with a ROM Space Knight after which he had driven it into the mud and dirt, even though it is an expensive toy with sensitive electronic components. Shane also had a negative run-in with another friend 'Rick' {also there related} as they seemingly competed for My friendship.

Miss Miyamoto sure was cute, and had circumstances been different, would gladly have 'dated' her. Se la vie. ∞

_____________
* A term used in a commercial for Bandini Mountain uttered by a prospector character mentioned once or twice in class to receive a laugh, which it did. 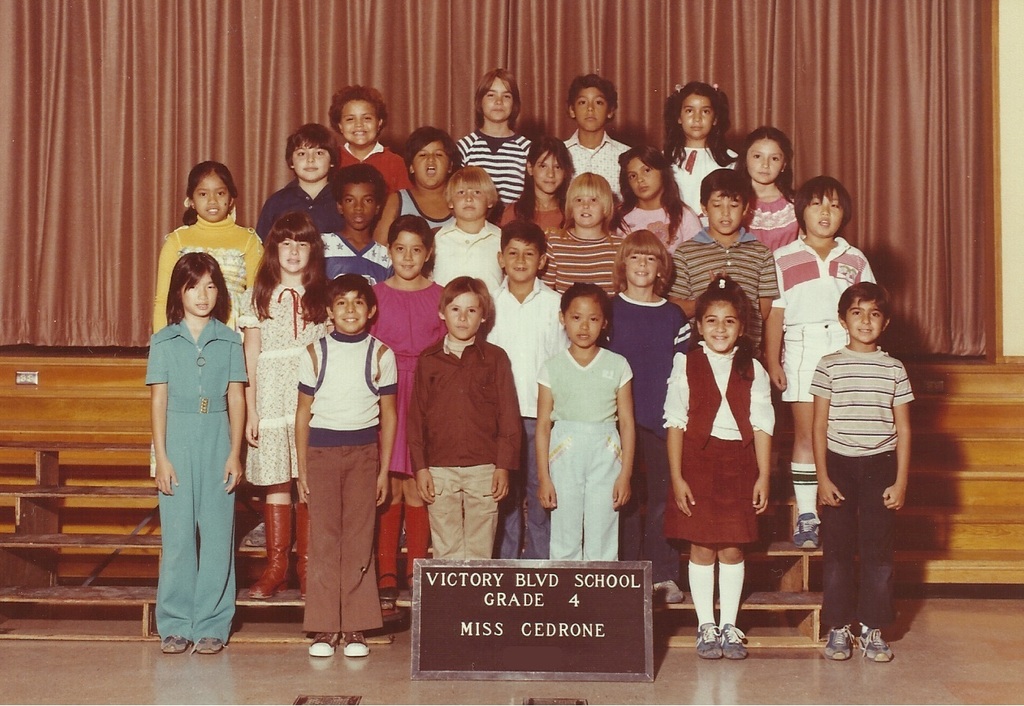 Not pictured. [4]: She just occurred to Me because of her appearance. Like Ms. Scurria, she also had a Caucasoid afro, but with bulging eyeballs, and a hatchet face, sort of like the Chicken Lady {The Kids In The Hall}. ∞ 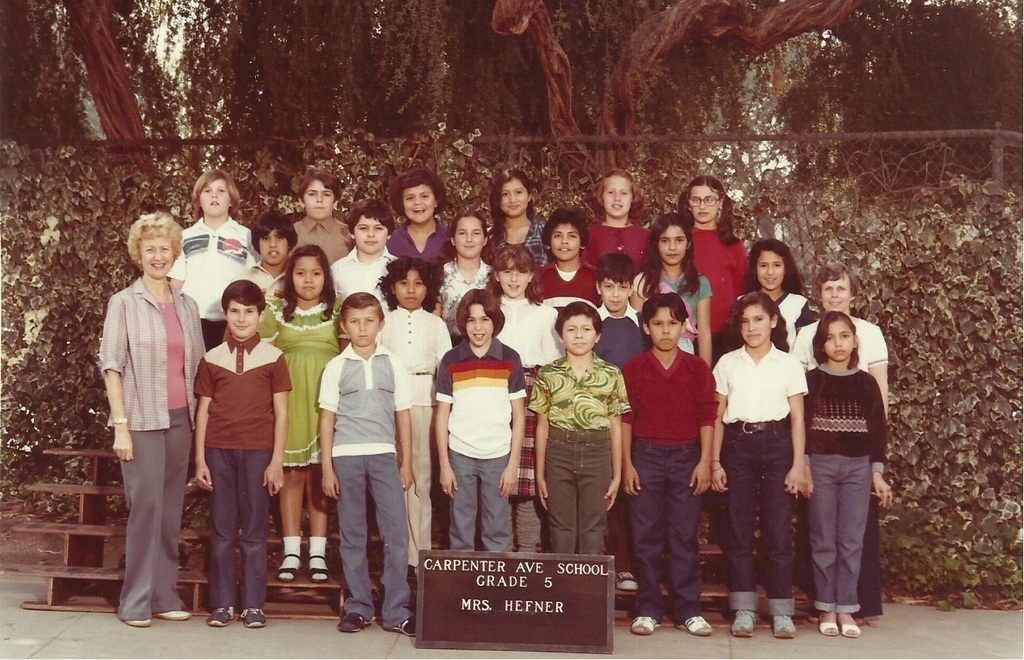 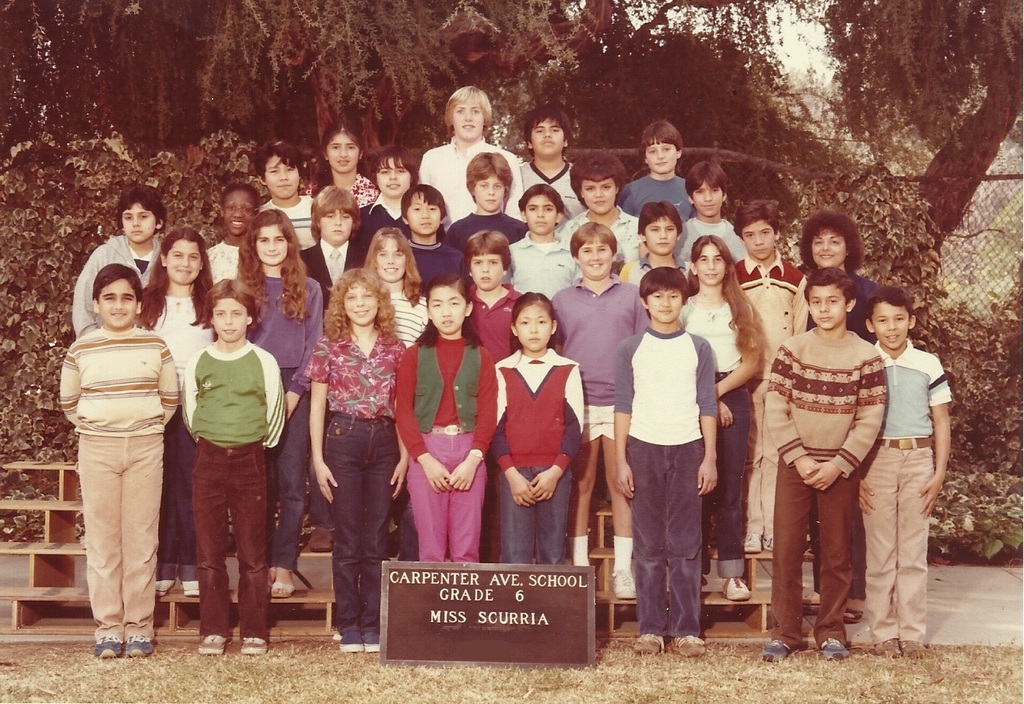 Don't recall too much about she or her class, except that she had an amazing afro and kind of looks like she could be Bob Ross' sister. Also, that this was most discernibly during The Gipper's presidency, and that she would leave the class for long periods of time for students to do as they willed - perhaps she left it in My hands as the resident Safety Officer.

The entire school. The Principal Mr. Kanigher is seated front row center. As good a photo as can be produced at this time. It is actually attached/glued to framing paper within the glass. I would be on the top right side in a suit. ∞