Taking the 'Martial' out of Martial Arts

Just like how certain spectacles like "cage fighting" and 'MMA', along with certain types like Chuck Norris take the 'art' out of Martial Arts {essentially a simplistic and brutish pummeling}, I have also witnessed in a few videos lately, although it has been going on for a very long time since the karate trend of the mid-70's through to the mid-80's, where it became a consumer product based on the slew of movies and shows released in that time frame, became prominent. I don't think Bruce Lee {Kung Fu, Jeet Kune Do*} or perhaps also Sho Kosugi {Ninjutsu*} imagined the varying impact their legends and films would have in this sense; for along with some who would take it seriously, there were those, being the herd after all, who glommed onto it as the "in thing" to do, eventually leaving when the popularity tide subsided. 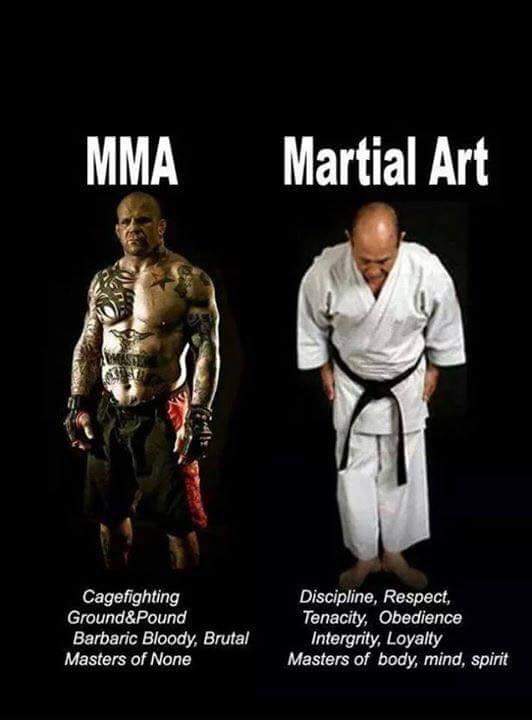 Now there are those who enter various 'contests', or 'tournaments' and treat it like a mere sports game, just for points, with no real combat to be had. The traditional term for the event known as 'Kumite' has even been used. For shame. It appears like they are just sparring, lightly touching the 'opponent' in select spots, even with heavy safety equipment on. It's essentially a game of tag.

Some perspective: Martial Arts, like Bodybuilding for that matter, is not merely a "sport", it is an Art. When it is dumbed-down to a mere spectator sport, then it has lost its intrinsic value for mere entertainment appeal.

It can be both of course, but not at the expense of the technique, and not only for competition. There is a grace & aesthetic, a consideration of symmetry, not just going through the motions. This is one of the main reasons the Ninjutsu dojo I attended did not take part in the common tournaments, but held intimate events of true worth, as is tradition. Various environments & situations were considered beyond the dojo, to prepare one in the event of such an occurrence, what objects could be used as defensive weapons nearby, terrain to one's advantage, as well as the use psychology {"Lesser Magic", psychological manipulation}, even working with energy flows {Chi}, along with philosophy to be considered {Tao & Shinto do actually contain concepts which can be useful to The Satanist; in fact, very many are resonant & directly pertinent}. These, along with knowledge of nature, ingenuity, devices, subterfuge, camouflage, concealment, costuming, various "tricks", etc., are indeed some of the reasons Ninjas are considered veritable Magicians & Sorcerers as well as warriors of the night. Indeed, in many ways, these applications accompanying Martial Arts could very well be described as 'combat sciences'.

This was also one of the primary reasons most of the Ninja Shidoshis and Shotokan senseis of Japan, Korean Tae Kwon Do Karatekas, and Kung Fu masters, whose familial institutions span the centuries, were/are very reticent to release cherished secrets to the West. ∞
_____________
* As "practical" as it gets, without robbing the martial art of style, or either the 'Martial' & 'Art' elements.
Tags: art, bodybuilding, martial arts, physical culture
Subscribe