An Architect of Hell

As a Dracling, My first acquaintance with the sublime work of H.R. Giger arose when someone acquired the demonic Alien figure bringing it on the Y camp bus. Sections of it glowed in the dark, and I was determined to possess it Myself, even though it scared My Mother, there was just something about the exoskeleton and musculature that was appealing to the mind, and the fact that the characterization is of an elite predator.

Then one day I was given a poster of The Spell IV from Giger's Necronomicon by a fellow named "Mott" {'Tom' backwards; he thought I looked like Ian Gillan}, while attending a party out by a pool. When I unfurled it, I knew it had to have a prominent place in The Noctuary Chamber, and so it has remained.

When Aliens 3 was released, so was a line of Alien figures by Kenner, and I collected all that I could. I especially appreciated the Alien Queen hive, Flying Alien Queen, Alien King, Night Cougar, bull, and Alien Warriors. They are meticulously molded in black, poseable, and just wonderfully evil. I even reserved a separate tank {'Leviathan' the fish's former residence} from the rat legion's cages I was both selling, and feeding My familiar serpent at the time, where the Alien Mother, probably one of the most delightfully gruesome and favorites of the manifestation, was preserved. Guests were taken aback by her, not really sure if it was real or not, but she was as real as she needed to be to instill a bit of fright upon onlookers. Even an uncle who visited once pointed at the tank and remarked "...that's not real"; really, as if there was any doubt... 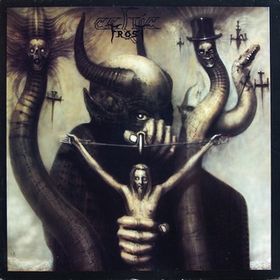 The work of Giger has become a constant for Myself, as I eventually recognized his style from the cover of Celtic Frost's 'To Mega Therion', then eventually on the cover of Danzig's 'How The Gods Kill', both of whom have full permission, as well as other works spotted from time to time by other artists whose influence can clearly be seen. Works by Giger have been featured on the following album covers:

Wheel of The Gods by DBlackthorne on deviantART

H. R. Giger has inspired some of My own art as well, as can be readily detected in Wheel of The Gods. It is pleasing to consider that even though I have since developed My own style of aesthetic expression, that a certain admiration has persisted. As a matter of fact, I continue to enjoy the Giger Calendars which have always complimented My own hellish realm, The Noctuary perfectly. Understandably, also considering the biomechanical creatures and environments, he, perhaps along with Hieronymus Bosch, Albrecht Dürer, William Blake, Gustave Dore, even Dali and some remarkable others, has transcended into a veritable "Architect of Hell" in the dark shadow side of the deep abyss of the mind.

As one of My favorite Artists, through the paintings, sculptures, film characters, the Giger Bar and Museum in Gruyères, Switzerland, overall, the grimly contemplative masterpieces will persist in perpetuity. ∞