It has been said that The Devil has the best tunes, and I would agree - but one should know where to find them. Does 'He' lull with pan flute every now and then, calling one's gaze unto a hidden gem of a secret place to awaken the muses deep within? Verily, it must be so...

It is interesting to ponder what became of some establishments one would frequent once upon a timelessness. Even before moving out to the San Gabriel Valley, I frequented Auditory Odyssey, Licorice Pizza, and Rhino Records: 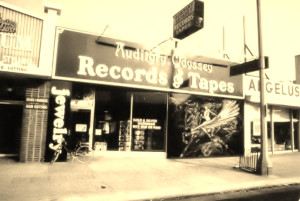 Located near Dracling haunts on Laurel Canyon Blvd. & Victory, practically across the street from Laurel/Valley Plaza, this front always intrigued Me. What initially caught My attention to this store was the large painting displaying an alluring naked woman on a black winged horse {sort of an 'evil Pegasus'}, along with the lettering and the black color of the store. Definitely stood out from the regular businesses near it. I remember seeing all sorts of great Metal LP's displayed in the shelves - particularly Cirith Ungol, Black Sabbath, KI⚡⚡ {right after they revealed their faces; although the 1st KI⚡⚡ records I ever purchased 'KI⚡⚡ Alive' & 'KI⚡⚡ Alive II' as a Dracling, were actually from the music section of a market, either "Market Basket" or "Alpha Beta"}, Iron Maiden {I would acquire "Live After Death" after the store had just closed one night while on My way out of town}, Judas Priest, others of a darker persuasion - and... The Mentors {specifically, "Get Up & Die" and "Live At The Whiskey A Go Go"; the first time I ever became aware of them - I would later be reminded when they were interviewed on KXLU by Spinoza Ray Prozak}. It was just pleasing to peruse therein, and may have been My first burgeoning with heavier music beyond rock.

Currently, the location recently housed a "smoke shop" named 'Dementia'*, which has also closed. Could the next occupants be Auditory Odyssey again? If so, I may make that My exclusive music store. ∞

_____________
* Ironically, even before the presentation of Uncle Fester's new girlfriend, I had named a lover 'Dementia', and appropriately so, considering she once complemented Me with a love letter written in her own blood.

Located a mere two blocks from Victory Blvd. Elementary, where I attended grades 1-5. It acquired its name from an Abbot & Costello skit. I purchased most all of My Hard Rock/Heavy Metal albums here, such as Mötley Crüe's 'Too Fast For Love' & 'Shout At The Devil', Twister Sister's 'Under The Blade' & 'Stay Hungry', RATT's 'Out of The Cellar', and possibly 'Eye of The Tiger' by Survivor - more of the mainstream music until venturing into Auditory Odyssey. Although it was in this store that I first became acquainted with that iconic demonic image of 'Abominog' on the cover of the Uriah Heep album.

I would eventually also acquire tapes from an ad in a magazine where you could purchase one tape for 99¢ to receive something like ten additional tapes, which started off My cassette collection.

I recall this establishment resembling more of a pop-type place where one could acquire some of the 'basics', as it were, and true to the name, always had a large jar full of free licorice available for customers.

'LP' was eventually bought out by 'Sam Goody' {didn't care for them much}, who themselves were bought out by Musicland, then Bestbuy. The location is now the site of an optometrist's office. ∞

Before moving out to the San Gabriel Valley to discover The Private Eye, I also inspected this place, where I acquired Venom's "Welcome To Hell", "Black Metal", & "Possessed", as well as Running Wild's 'Gates To Purgatory', 'See You In Hell' by Grim Reaper {as the title track was playing on the in-store speakers, "We're gonna' need a lyric sheet for this one!" was overheard}, and 'Fuck Like A Beast' by W.A.S.P. At the time, the store had a very "indie" feel to it, carrying all sorts of music for the alternative listener, from Metal to Punk, Death Rock, to comedy and Jazz albums. Before The Private Eye, this was the only place I could find any of the "extreme" material I was searching for. Of course, subsequently also acquired on cassette and CD. ∞ 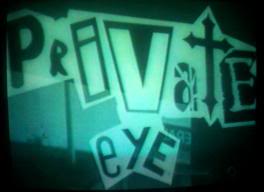 Probably My all-time favorite record store, which was part everything in the dark metal genre, and occult shoppe. The diabolical atmosphere, black stone walls bathed in red and black lights, posters displaying horror and hellish imagery from bands to infernal art, black shelves filled with a plethora of nefarious LP's and cassettes, magazines, a several choice books, including The Satanic Bible, The Satanic Rituals, and Necronomicon, displayed behind a glass case featuring a skull, spiked gauntlet, and pentagram / Baphomet jewelry. Upon another wall, shirts of one's choice bands. Behind the register, the large black goat head shrouded in a hood. The ever prevalent scent of incense and burning candles.

Probably one of the major reasons why I liked it there so much, like a veritable second Lair, besides the obvious collection of items, was because it did resemble My own Noctuary.

When a notable band {such as Venom, Slayer, Exodus, Bathory, Celtic Frost, Megadeth, Possessed, et al} was playing a local venue that night or soon thereafter, they would often stop by The Private Eye for in-store autograph signings, and were always met with an enthusiastic greeting. I was pleased to possess many autographed albums.

At the time, I acquired many a tape, record, and shirt here {actually most of My Black/Death/Thrash Metal vinyl collection and tapes} some patches, posters, and back patches {or "armor"}, and also including My very first Baphomet medallion.

I was regaled with tales of Christians daring to enter the store with attempts at conversion, to shoplifters who were thrown out by the collar, if not beaten until they exited the store. Good riddance.

According to one source, the store closed soon after an alleged domestic dispute between the so-called "hippie" owner and his 'girlfriend' transpired, resulting in his incarceration. Another allegation is that one shoplifter was beaten badly enough to merit litigation. From recollection, the business owner of the store was often unseen in the back room, while the employee {whom I remember being just one; a very amicable fellow who shared many similar interests} tended the register every time I entered there.

It eventually closed and was replaced by a hair & nail salon. Oddly, since then, the street was renamed from 'College St.' to "Italia St." on one side of Citrus Ave. where The Private Eye was, and "Cottage St." on the other, like someone was/is trying to hide these devilishly delightful segments of nefarious history. ∞ 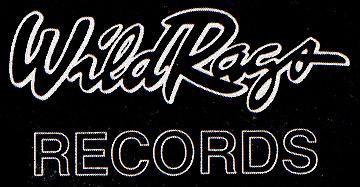 A bit larger than The Private Eye, and also catering to the "glam rock", "hair metal" genres besides Death, Thrash, etc., they also sold a wider assortment of clothing - ergo, the term "wild rags" {which is said to basically mean "slut clothes"; although along with the spandex, there was also the leather, studs, and spikes}.

I also rented some videos from here, including Venom's "The Seven Dates of Hell" Tour, "Alive In '85", and "The Ultimate Revenge" {featuring Venom, Slayer, and Exodus}. Quarthon of Bathory was also in-store here once, along with several bands that the company integrated towards a record label, also by the name of Wild Rags ['Records'].

Eventually, the owner Richard Campos was said to engage in unscrupulous business practices and bootleg shenanigans, along with reselling some merchandise at new prices, reusing clothing, among other distasteful actions, and thus, the IRS took possession of the store and all property therein {he probably also squelched on taxes}, selling off the contents; while Campos has since disappeared.

The building remains with only the outline of a female on the outside of the edifice. ∞

Hot Rocks Records {Azusa/Covina, CA}
This was originally located between the infamous Shangri-La strip Club on Azusa & Arrow Highway on the border of Azusa & Covina, and the "Taco Hell" fast food outlet within a parking lot inlet with several other businesses, featuring all dark metal genre music, where I purchased Bathory's 'Blood, Fire, Death'. This location was relatively short-lived, and eventually relocated to 'Old Town' Covina, widening their genre collection to include 'Classic Rock' and 'New Wave', probably to stay in business.

It has since gone defunct and replaced by a photography studio. ∞ 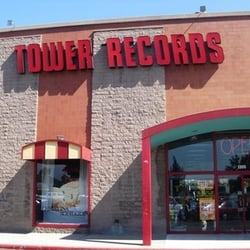 As a retail store, I recall when they made the transition from selling tapes to CD's. This location was situated not too far from The Noctuary at the time, so I would once in awhile take a Nocturnal Constitutional thereunto for some desirables.

The last ever item I purchased there was the 'MMV' collection by Venom. Just prior to that, 'Master of Reality' by Black Sabbath, Tenacious D, and The Doors' 'Waiting For The Sun" on CD as a gift for someone who has owned that album in every other format.

As a side note, I tend to keep receipts and insert them into the item I purchase, just to keep a record. Additionally, as a matter of fact, when you order through their website now, a receipt with the logo is included, much like purchasing the item over the counter, which provides for evocative stimulation. ∞

So after The Private Eye and Wild Rags closed, it became Tower Records for choice musical selection, even though it has since become an online store exclusively, and with the choices provided, remains preferably so with very few exceptions {like Dark Realm Records in Downey, CA; I'd rather frequent a store like this!}, considering it was a personal experience to actually peruse the aisles either by Myself or with an acquaintance, which contributed to the Draconian Devilution. ∞

Currently relocating from the former lair in Downey to another in the city, this is the closest to The Private Eye yet, and will probably become My primary source for Dark Metal musick in the near future upon the opening. The aesthetics are very similar, the look and feel, black on black, gloomy, decorated with not only the multimedia preferences, but softly-flickering amber candle bulbs on black chandeliers. In many respects, it seems like The Private Eye is back, larger. We shall have to see if there are Occult offerings also available, bibliography, perhaps statuary and supplies, & the scent of incense.

Owned by members of the band Sadistic Intent {those actually involved in the 'scene'}, the original store featured red carpeting with black walls and a long dual-sided black rack filled with CD's from this genre, posters on the walls, and a large pentagram behind the register. The outside featured the DR logo above the doorway, flanked by a display of skulls, gargoyles, and demonic decor, granting the establishment a definite dominant {black} mass-like effect. It has been compared to Norway's "Helvete", and I will add The Private Eye.

I expect this devilution to expand upon the first, to become darker, more hellish, more 'evil'... ∞