Return to The Cecil Had an interesting time returning to The Cecil Hotel recently to take some photos and gain some personal experience & perspective walking the property. It indeed has a very nice lobby, restored statuary and enhanced decor, Noir architecture, and a pleasant atmosphere, which one walks into right off the bat through the front doors. I perceived olfactory stimulus while walking to the elevators from the in-house eatery therein, along with a lemony cleaning scent. Some nice black chairs are positioned about tables in the lobby, but entering was an eye catcher, with a mural of some beach-like paradise between two ornate columns, as if peering through and down to the shore, while on the other side, a framed portrait of sailboats on the water. 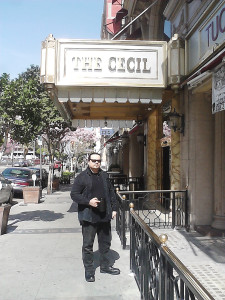 We decided to travel up to the 9th floor. The elevators are rather small, and would be constricting with more than two aboard, and as a matter of fact, there is NO 13th floor listed on the floor buttons. So when you reach the 14th floor, you are actually on the 13th. Watching that video of the ill-fated tourist, the girl must have been very tiny, as Asians tend to be.

So just for the morbid fun of it, I walked into the same little space she was in, when lo and behold, the same tile that was in that video is the very same which is on the 9th floor - so it was a rather intriguing set of synchronicity to be sure. I took a brief walk around the floor, noting the thin, gloomy maze-like hallways and view from the cottage-like windows where several may have taken their final plunge, if not within their rooms; and the very subtle elevator doorways which look like just another room door. No visitors are allowed, and we were not doing so, which afforded some time to familiarize oneself with the surroundings.

A notable dynamic with the elevators is in its settling upon the respective level, the ratio upon which it travels slows to an almost vertigo effect with a sensation of sinking beyond the floor upon one is standing.

The accommodations have been stated as questionable, but the lobby and hallways seem clean with a fresh renovated look and feel. But what happens when the sun goes down... ? ∞