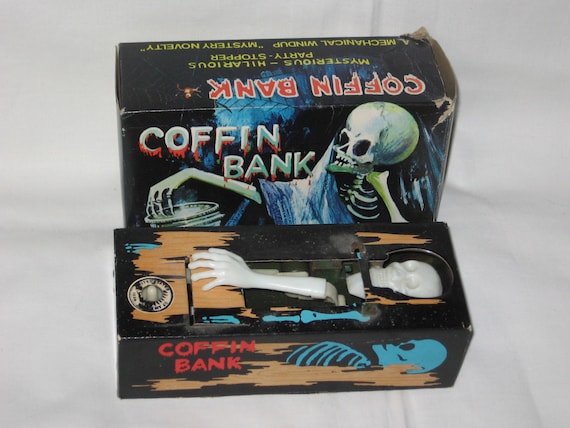 Coffin Bank: Who says you can't take it with you?

I initially found this item at the former Noctuary while excavating about, and was very pleasantly surprised. This jovial fellow reaches from out of the wooden coffin and collects coins that are placed on a tab on the platform, and from under a black 'shroud', scrapes his claws, seemingly granting a nod once entered. He even considerately glows in the dark!

Completely hand operated with no electricity involved, one cranks the dial to the limit. Collects everything from quarters to dimes, pennies, and nickels, even silver dollars. He releases his bounty via a secret opening on the bottom. Emits a buzzing sound once activated like walking figurines. Initially sold as a Halloween novelty, among select choices, the Coffin Bank is a splendidly amusing acquisition. ∞ 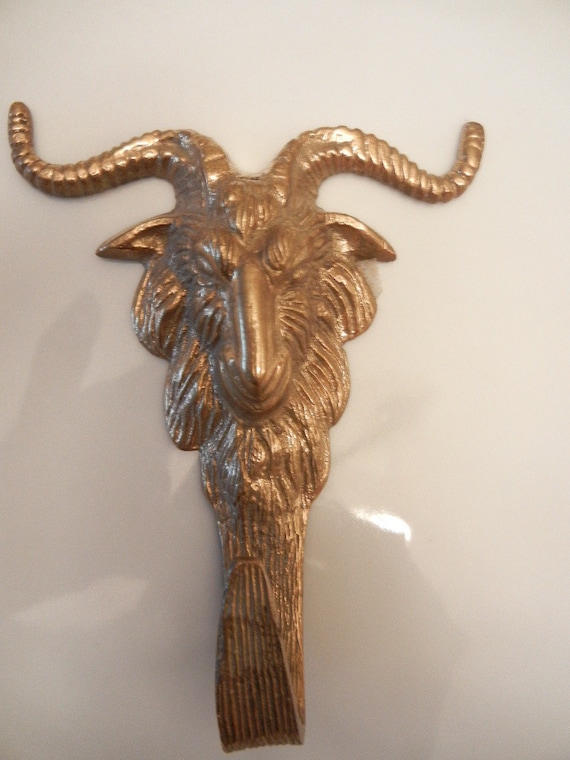 Made of brass, I originally possessed this item from a store that also sold the "Black Obelisk of Setan", which has since been possessed; and snatched it up immediately, Ideal for either clothing or medallions, or if a pair, makes a great sword holder. Elegant with a bronzed finish, his subtle smile recounts the nefarious activities in The Lair. Hefty with placement hole on back. ∞

This beautiful ashtray features a graveyard scene where there residents are dying to get out! A coffin rises from the ground, containing a smiling skeleton with a pit before him, where one may perhaps converse beneath the full moon while enjoying one's preferred cigarettes {current favorite: Marlboro Black}. ∞

Originally acquired at Spencer's Gifts, which would carry many wonderful desirabilia from canes {possessed for Constitutionals: wolf's head cane, skull} to ornate dragon mirrors {used in Vampiric Communion}, gargoyle statue props {My dear 'Nocturnus'}, three-dimensional framed ghouls/vampires/witches, skulls, diabolical jewelry {skull pentagram, skeleton pentagram}, devilish posters {one comes to mind in particular, depicting a grinning Satan with the words "C'm On, You Know You Want It!" with a display of various 'forbidden' sugary culinary delights}, and electroscopic spheres {always present}; it was Halloween all year round there, which made it a convenient, favorite shoppe to haunt.

Upon last perusal, it had become more mainstream, catering more to poseur pseudo-goth 'emos' {which was originally a tasty sour creamy confection ideal for baked potatoes & nachos; ironically, those now labeled the nomenclature are themselves veritable 'potatoes', as it were}, pop punk, even rap tards, filthy grunge hippies, & otherwise general herd. ∞

Finding My Kraken Monster figure today made Me recall My beloved Shogun Warriors, who were My Dracling 'buddies' whom I'd create all sorts of adventures for, even fabricating a marquee for the day's Magical exercise of the imagination. With missiles, launching fists, they roll and 'fly' to battle and conquer. These shall be eventually collected for honorable display. ∞

Satan Is Alive! A Tribute To Mercyful Fate

I had heard for a long while that King Diamond was planning on one day writing a book based on the lyrics to the albums, but so far, it has not materialized, but when I heard that a comic book was in the making, I thought that this too would be a wonderful addition to the KD/MF mythos.

I was recently reminded of its existence via a post from Kevin Slaughter, making it available through Underworld Amusements, at a sale price, no less, so it was an immediate possession. Plus the recent interview with King Diamond on RFS' Metal Invaders was all the more contemplation.

Combining a favorite band/musician/showman/genre with horror art, and illustrated by various artists of many of the legendary songs, combined with My evilove of comic books {I had actually recently found a part of My collection of X Men comics still preserved in the sleeve}, so I thought it all providential; and if that wasn't enough, if there was ever any doubt, I just so happened to have exactly $17.77 in My paypal account, after the title of the song "The 7th Day of July, 1777" from the masterpiece album Abigail, which was more than enough to purchase this splendid Satanimation item.

Satan works in the most incredibly gratifying ways. The Devil always gets what He wants. No "coincidence" here, just pure Magic. Hail King! Hail Satan! ∞