The true history of the city of dark angels & Hollywood Noir is far from the pretentious depictions fostered by the mainstream media. When you dig a bit deeper, behind the veil of herd icons, movies, & starry-eyed folklore, the real history is a mysterious and shadowy one. Here is one such account.

Perhaps these anomalies are elements of The Combination Lock Principle at work*. 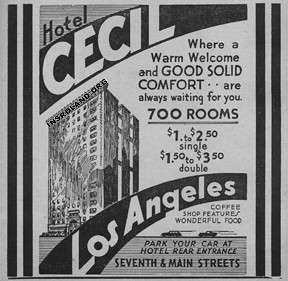 Taking The Law of The Trapezoid* into consideration, the architecture features an overhang decorating the circumference of the roof, as if 'looking down' upon the street, while two elongated red signs flank the building like red arms welcoming the unwary inside. The fire escape located on the right appears like a lightning bolt jutting down earthward, while the main door sign above the entrance displays two grating decorations on either side of the title, giving the impression of grates that would be on the sidewalk.

The lobby has been remodeled with classic European style decor, including statues and elegant Romanesque/Grecian elements. The interior is a labyrinth of thin, dimly-lit hallways leading to small open areas with cottage-like windows with a view of the dark city below, accessed via virtually "hidden" elevators, which are unobtrusive, essentially looking like the room doors, which could possibly be missed were it not for the floor number displays above the entryway; and otherwise via an open spiral staircase giving the impression of a vertigo effect upon the observer. There are subtle differences per floor, featuring rich, dark coloration and preserved Noir charm. There is one hallway with nothing but a window at the end of it, as if someone could take a running leap straight through.

There definitely seems to be Dark Forces at work here. Personally, I would not recommend residing here for vacation or tourist purposes, but perhaps only for investigative exploration. Should you wish to stay at The Cecil while visiting Hell-A for a night of haunted experience, call 1-800-666-2691. ∞

My impression of what happened to Elisa Lam is that she became as if "possessed", as it were, by a 'presence' {and otherwise environmental anomaly} that is actually discernible in this video still:

A shadowy mass can be seen precisely in the very spot where she is was standing {"LAM"?}. Plus, one has to wonder if the film "Dark Water" was playing that night on the closed circuit broadcast system, or she had seen it prior, influencing her to live out the scenes - she seemed very impressionable. Perhaps this combination of factors ultimately led to her demise. After all, she was inspired on a sudden with a persistent wanderlust that perhaps led her to become a veritable "sacrifice" to dark forces dwelling therein, who must feed... ∞

Posts from This Journal “tales from the shadowside” Tag