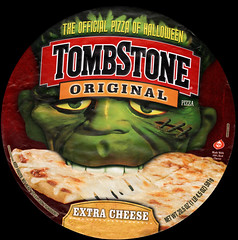 I have long since enjoyed these pizzas already, but I Am very pleased by what is being done for this season's Halloween celebration. The same delicious pizza pies, but now decorated with monster characters is amusingly splendid. I first became aware of these when I viewed the entertaining gangster ads for them, plus the eventual claim of being "The Official Pizza of Halloween", so thusly intrigued to have an 'educated' opinion on their quality, I decided to give them a try, & found that they are actually pretty damned good for store-bought. Great for dinners with the little monsters, perfectly complimenting the monster breakfast cereals.

Then, when I saw they were included in The Addams Family film {the scene where the progeny are selling lemonade}, it became even more of a favorite.*

_____________
* I actually did experience something like that scene, while on My way to see the subsequent Addams Family Values, a troupe of girl scouts were selling their cookies out in front of a supermarket, when asked if I wished to purchase a box {they are actually quite delicious}; of course, yielding to temptation, not wanting to waste such a perfect opportunity, the resultant question was of course, "Are they made from real girl scouts?" It was a hoot! ∞
Tags: addams family, comedy, dining, dracling, dracumentary, food, halloween, hell's bar & grill, hell's kitchen, humor, infernal progeny, loki's laughter, snackrifice
Subscribe