There's nothing like a pleasant picnic at the cemetery, either in the early morning mist or near dusk, asserting that Life Is The Great Indulgence. This time, we decided on historic Evergreen, which contains such names like Lankershim, {Isaac Newton} Van Nuys [sic], & William Workman {see Workman's Ghost}, whose influence upon the development of the city have been honored to their nomenclatures from cities to street names throughout; and 'The Human Cannonball' Hugo Zacchini.

Located in the center of an unassuming neighborhood, the cemetery of course takes aesthetic prominence thereof, with graves from the magnificently ornate to simple plaques embedded into the black earth; and some much smaller markers are even edged up very closely to curbside. 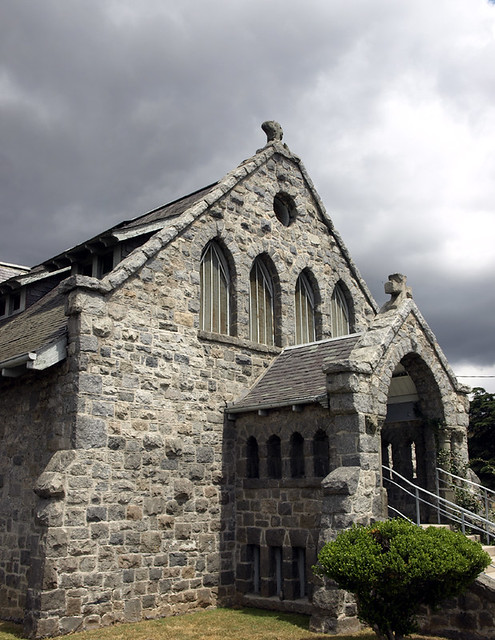 Entering through ornate black wrought-iron gates, Evergreen Cemetery is a maze of sections twisting and winding through Halloween-hued flora and fauna. Considering the primary eras of interments, besides the largely Caucasian occupants, and some African-Americans, there are also specific sections divided into racial designations such as Japanese, Chinese, & Armenian, with traditional gravestones of same. There is even a so-called "Potter's Field", which was intended to bury the city's nameless and/or indigent, yet the sheer numerage eventually compounded exponentially, so as to necessitate a Crematorium to be built on premises.

To the welcoming squawks of ravens, we found ourselves a nice shady spot 'neath a three-pronged tentacled tree to partake in repast and libation, in the company of our feline companions. Amusingly, Nero [pictured] decided to climb the nearby tree in pursuit of a squirrel who responded with a couple of generally aimed nuts.

A beautiful stone-cobbled Gothic chapel adorns the center of the park, reminiscent of Hammer Films, and on this fortuitous day, a funeral was taking place, allowing for a peek within the usually-closed edifice, revealing a delightfully gloomy observation, even with the three crystal chandeliers looming above, or the thick glass festooned in the arched windows, allowing for only minimal light interruption, glowing upon the dark wooden pews.

Interestingly, the cemetery also features a "walking/jogging track" encircling the property outside the gates, in a juxtaposition between the 'living' and the dead, although a constitutional within preferably provides for an invigorating & contemplative perusal. ∞

At night, the cemetery assumes a total darkness mode, as if a black veil of shadows engulfs the park completely, where even light cannot penetrate. No streetlights reflecting from any surfaces, and even seems to be resistant to flashlights, as if a localized black hole has enveloped the property. No light can be perceived originating from the other side of the park, either. ∞