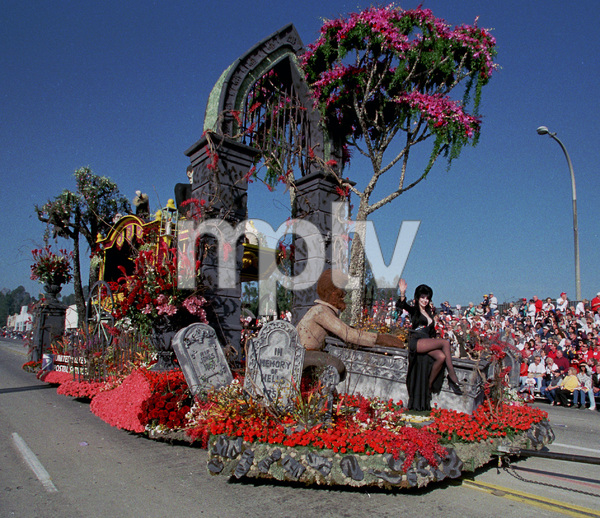 I do not normally watch parades, with scarce exceptions. However, on occasion, there's something about the pomp and circumstance, & the celebration of decadence combined with a mug of Jack Daniel's eggnog, or a cup of cloven coffee, moist fruit cake or briquettes, &/or a large chocolate figurine, makes for an amusing spectacle. However, My impression of the Rose Parade this year was that of a rather bland, repetitive one, lacking individual creativity & imagination. There were floats which almost seemed to be cribbing from each other with seemingly the same idea. not just the general theme, but the same exact presentation of it. There were no less than three floats which featured a plane chasing a bird, & two almost identical ones featuring a sleeping child with the bed positioned up front, & two more time machine versions with the same gizmos & mechanical works; & something like three football-themed floats.

The only ones I found to be mentionable this time around were the Chinese dragon celebrating the Year of The Dragon, the Natural History Museum's Dinosaurs, the crashed alien saucer with aliens attending a lemonade stand {seemingly stating the ubiquitous "when life gives you lemons, make lemonade"; ergo, making the best out of a bad situation}, & of course, the stealth "batplane" bomber starting it all off is always remarkable.

Probably the most memorable past setup was the USPS' Classic Movie Monsters series entry advertising that nice line of stamps, which featured the ever-lovely Elvira riding on a hearse cortege with The Four Crown Kings of Helloween Count Dracula {Air}, Frankenstein {Fire}, The Wolfman {Earth}, The Creature From The Black Lagoon {Water}, along with The Mummy, & The Phantom of The Opera, et al. That was the occasion when the Stealth bomber was introduced to the parade as well.

At the conclusion, it was a bit irritating to see the cavalcade of 'occupy' scumbags trailing the parade looking like the typically disheveled, miserable, grungy hippie-types {one was even dragging a literal cross}; I instinctively bare My fangs at them. However, I did find their octopus with the $ symbol for an eye 'display' rather apropos after all {supposedly representing bankers and/or the government, or "the man" with his tentacles into all levels of society}, which to Me could represent stratification between these lowlifes & those responsible, evolved individuals on a higher rung enjoying what Mammon offers. They themselves were followed by our exceptional Riot Police 'just in case'. It actually gladdened My black heart to see them - too bad there were no altercations, which would have given this otherwise rather boring parade some exuberance.

Overall, perhaps there should have been more thorns this time around. ∞