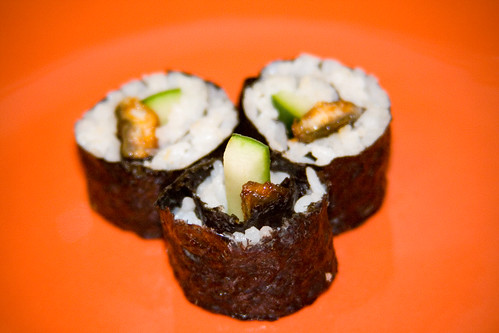 Had some eel (unagi) sushi last night. I would not actually hunt for the creature, being that beef is the ultimate meat in My opinion (seconded by pork, then chicken), but being that it was there anyway, I decided to give it a try.

If seafood could be gamy, this kind of tasted like that. One could really savor the ocean therein. Not salty, but kind of pert, actually. The skin is a little rubbery, but not quite like octopus, which I also sampled before. Both of which taste a lot better with some soy sauce, perhaps with a side of sake.

I was reminded when I regularly consumed quite a bit of oriental food during heavy Martial Arts training, being surrounded in the culture quite a bit, from trading lunches with asian acquaintances, to even possible mate preference at the time, and particularly enjoyed the crunchy sushi offered.

Some cryptozoologists have postulated that if Nessie existed, it would be a prehistoric eel, somehow surviving to this day, which would have the ability to slither swim up trees if needs be, snatching up various small wildlife for sustenance.

Overall, I personally would not make this unusual repast a usual dining experience, though now I can say I have an educated opinion on the fare. ∞