Located near train tracks and a freeway, and set about 200 feet from the road, relatively hidden from view, that the casual passer-by would miss this intriguing location, is Spadra Cemetery, an odd little bone yard dating back to the 1800’s, complete with a rust-worn decrepit sign. Having an abandoned look to it, a couple of tombstones are actually toppled over.

Myself and a couple of acquaintances had entered this rather intimate cemetery one crisp autumn evening for a perusal into this legendary graveyard. As tends to be the case, an eerie silence graces this memorial park, spanning only about a couple of blocks in diameter, yet when one enters, one receives the impression of a vast, desolate, and windswept environment, reminiscent of an Old Western horror movie. 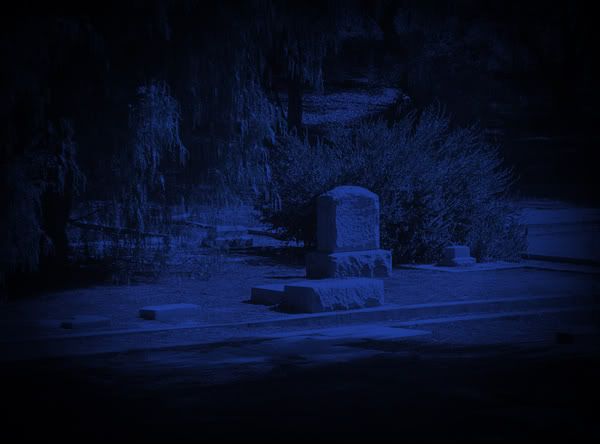 There is a pleasant grove of willow trees shielding the place from freeway view and semi-circling from within. It is from here that the supposed sounds of phantom footsteps and crashings have emminated This over-looming spot may also very well be a salacious spot for carnal indulgence as well.

I have long-since heard of various haunted activity occurring here, from the shadow of a man believed to be that of ’James Fryer’ seen sometimes disappearing into his tombstone, and if visitors become unruly, a sensation of being stabbed, pushed, or strangled is claimed to have been felt by those who misbehave.

A mysterious hot wind manifests, followed by sensations of tugging at clothing and the laughter of ghostly children "Bertie & Ernest", to being tripped. Objects dematerialize from one location, only to reappear in another one nearby which had not yet been visited, as if leading the observer to take a tour. Humorously, I have heard of someone leaving their beverage on a tombstone, only to have it reappear on another plot at the other end of the property.

The Blake Family graves yield a nurturing maternal woman protectively embracing young women who near there, accompanied by the scent of floral perfume.

The cemetery has since sadly been closed for renovation due to vandalism, and is cared for the Pomona Renovation Society, to be re-opened when proper measures have been attended to. The nearby Blake Mansion has recently been opened for tours, which had for a long time been considered haunted as well {with a splendid view of Spadra Cemetery}, and now provides the interested with the veritable {educational} ghosts of history. ∞