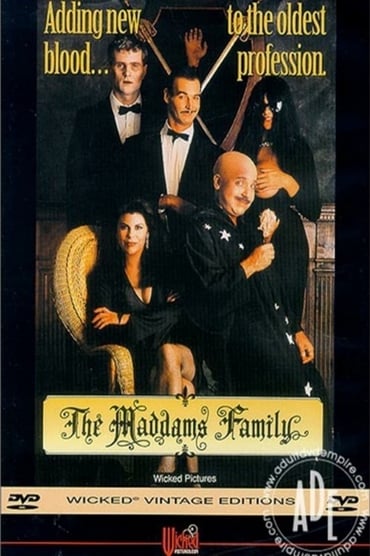 Based on The Addams Family, the characters herein are amusingly renamed, albeit rather predictably vulgar:

Fortunately, there are no versions of Grandmama or Pugsley, which probably would have proven too disturbing. 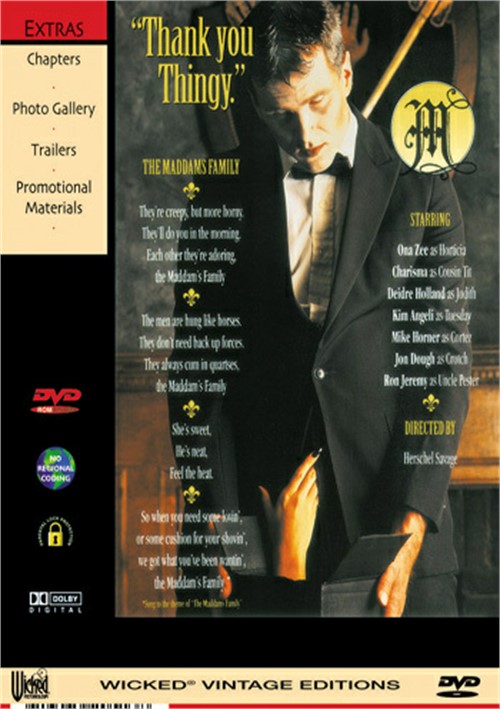 Seems The Maddams Family are facing possible financial hardship because peace has broken out across the world, which lends to the conjecture that they profit from warfare, among other things, a-la Basil Zaharoff as "agents provocateurs".

Being exclusive individuals who find general herd interaction frustrating and intolerable, they must divulge a method to work from home. Their brainstorming results in deciding to enter the erotica biz and run an elegant brothel from the Victorian Manse, but first, they must sexercise to gain sexperience, and diligently begin practicing upon each other at every opportunity.

To the tune of her French enunciation, Cortez and Horticia passionately indulge in each other in the bedroom which features gloomy surroundings and a stained glass window; shedding her form-fitting dress, she reveals alluring black lingerie while Cortez savors and plunges into her sumptuously. Cousin Tit and Tuesday have a delightful romp; the gallivanting Cousin Tit* initiates an intense orgasm in the playfully coy Tuesday, who claims to have never experienced that degree of pleasure before; a salacious Cortez subsequently enjoys nubile Tuesday as well; later, a virginal Uncle Pester and Tit cavort in the garden, while she is very well surprised and pleased by the proportions of his appendage {"Who knew what was beneath that robe?"}; and finally, a blond house inspector arrives to assess the property while accompanied by Horticia, discover Crotch receiving a helping hand from Thingie, when they decide to converge upon the situation as well, which lasts a good 15 minutes or so, in various enjoyable positions, with Crotch periodically uttering his characteristic groan from time to time.

Other scenes include Cortez fencing with Crotch in the courtyard, and towards the end, Horticia clipping roses. Music is jaunty, ranging from a customized variant on the Addams Family theme, to the classically 'spooky' Beethoven's Fifth, and even a couple of instances of black noise, believe it or not.

In the end, the business of pleasure is a success, and The Maddams Family prevail by their resourcefulness, truly utilizing their best assets. ∞

_____________
* Humorously appropriate, considering in The Addams Family series, Cousin Itt is known as quite the playboy.

For one who has long since appreciated, and even personified The Addams Family in many respects, I have to admit that I was somewhat taken aback by this when I first became aware of its existence around the time when the first movie was released as I perused a video store. It almost seemed 'sacrilegious', yet still, there was something quite compelling about a proposed erotic version of these characters that was nestled in the back of My mind - after all, Morticia Addams and the fetishistic like do hold quite an obvious prurient appeal, what with her tight black dress and long black hair, and very well serves as an E.C.I. So when I recently had the opportunity to view this presentation, I was curious to survey what had been created. Plus, with some of the recent wonderfully Satantric artwork created by Isabel Samaras in this vain, it held even more of an attraction.

Having the entire original series collection, the films {even the underwhelming "Reunion"}, the charming Halloween special, along with various other collectables, the parody is a must for those who can appreciate such eccentrically odd comedic sinemærotica. ∞

Posts from This Journal “sinemaerotica” Tag