"Throughout the ages, man has sought to look behind the veil that hides him from tomorrow. And through the ages, certain men have looked into the polished crystal... and seen. Is it some quality of the crystal itself, or does the gazer merely use it to turn his gaze inward? Who knows? But visions come. Slowly shifting their forms... visions come." - Pete Krumbein.

Stanton Carlisle is a young carnie fascinated by the denizens of the carnival midway, especially the mental acts, and the faux psychic Zeena in particular, who puts on quite a remarkable show. Through a series of clever manipulations, he plays the rubes well with the best of them, with a goal to learn a secret code shared between Zeena and her drunkard husband Pete. He exploits this weakness, handing him his very own bottle of what he thought was 'moonshine', but turns out to be the wood alcohol Zeena uses in her act. After his 'accidental' death, he takes his place and learns the code well, traveling from town to town fleecing the local yokel boobs.

Besides her psychic show, Zeena really does believe in Tarot* cards, and had previously prognosticated the demise in 'the hanged man' beside the 'Death' card {reversed}, signifying a negative change.

Stan's natural talents really shine forth when he so expertly cold reads the local marshal... the kid has it! He was initially fixing on arresting Zeena and the lovely Molly, A.K.A. 'Electra', who is a living electricity conductor, for indecent exposure. Stan explains that she needs to wear that skimpy outfit, otherwise any regular clothing would catch fire. He then begins to regail him with all manner of personal information and seeming 'psychic' impressions, all the while implanting covert suggestions, both amazing the Marshall and buying time for the crew to clear out the crowd and pack it up.

Here is where he meets psychiatrist, the beautiful Lilith Ritter during a cold reading at a performance, in which he divulges that she was attempting to trip him up with a trick question. This impresses her enough that they should meet at her office, wherein he discovers some of her own methods of hypnosis; recordings of her wealthy patients' innermost thoughts during sessions could prove very valuable, veritably turning that berg on its ear! They eventually strike a deal, and go into the spook biz together.

Now with all this additional information, he ups the anti from 'psychic impression' to 'perceiving the dead', he gains the interest of a wealthy Lady who receives such comfort from his reassuring words about her dead daughter, that she vows monetary support, even mentioning bestowing him his own tabernacle!

Zeena and Bruno decide to visit their former friend, the now wildly successful mentalist, wherein during the visitation, Zeena reads the Tarot cards which again predict ruin by 'the hanged man', which actually represents stasis / 'life in suspension'. Annoyed by the reading, he kicks them out, although the card seems to assert itself...

Soon thereafter, Carlisle is faced with his greatest challenge - at the behest of a Mr. Grindle, if he can produce a vision of his long-lost love 'Dorie', his dead fiance', he will be paid a small fortune. Despite her protests, being her approximate age and appearence, he gets Molly in on the scam; but when Grindle pours his heart out in the garden, she breaks her etheric composure, effectively ruining his career marking him as a sham, so he goes on the lam without Molly to keep her out of danger. A classic bittersweet train station scene ensues.

On his way out of town in a cab, he realizes he has been had by rotten Ritter, who had replaced $100's with singles, and tries to convince him that he is crazy when confronted. Everybody's on the take. He flees amidst police sirens.

With the loss of his career and wife, he plunges into obscurity and alcohol abuse, keeping the company of dregs, until realizing he must return to the midway, from the bottom up once again. Attempting to gain the position of 'magician' as 'Shiek Abracadabra', which are a dime a dozen nowadays, he is promised a bottle a day and a place to sleep it off, if he can fill the role of... geek. The geek is some sort of wild, filthy hursuit humanoid deformity said to eat live chickens. At least, that description is for the rubes, and spells good business. Suffering the fate of previous geeks, he is reduced to an undignified level until recognized by none other than his dear Molly, who cares for him thereafter. 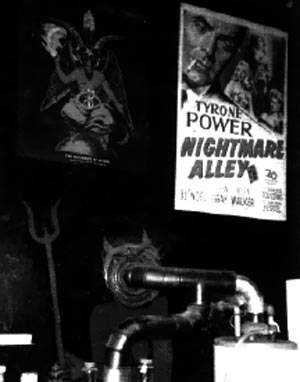 Carlisle went full circle, eventually finding himself in the same position, quoting the very same words uttered to him by lush Pete Krumbein, and as a matter of fact, here and there, one can actually hear the faint frantic mumblings of the geek while on his way to descent. Had those gypsy tarot cards actually predicted his downfall, or was it all just a self-fulfilling prophesy? Perhaps a bit of both...

Nightmare Alley strips away the pretentions of those populating the 'spiritualist' spook biz, from so-called 'psychics' to mediums, even including the jesus racket, revealing the true nature of selfish intent, profiting from the neuroses and emotional suffering of the gullible, sometimes believing their own spiel. Whether in the carnival or in an office, "it takes one to catch one..." While the plot outlines these predatory factors, it also manages to sustain an underlying sensation of a dark energy pervaiding. Through these deceptions, it seems there are certain machinations operating in the characters' lives which cannot be denied, but which are actually malleable.

Throughout the film, one will notice proliferous uses of trapezoidal angles, pentagrams, and uses of various light and shadow techniques somewhat reminiscient of shauerfilm productions, creating an eerie atmosphere both entertaining and stimulating.

_________
* Word to the interested: "Tarot" derives from an Egyptian, not a french origin, it is pronounced 'tarot' like 'merit', not with the typical accent 'terroh'. The thing about such oracles, is that they are not inevitable predictions, but rather can serve as warnings so that the subject may pay attention to such matters and effectively modify situations by avoiding such obstacles.