The Addams Family & The Munsters

As a fantom of both of these series, one will invariably and eventually comes across the question: "If you had to choose one over the other, which one of these two do you like better, and why?" Upon analysis, The Addams Family are more intrinsically Satanic by virtue of their attitudes and lifestyle, whereas The Munsters are more or less a 'normal' family unit who happen to be caricatures of classic movie monsters. 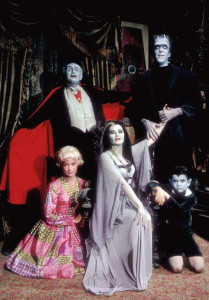 Take away the green makeup, and they are more comparable to the Cleavers.

Herman {Frankenstein} holds a rather 'normal', if somewhat unorthodox 9-5 job working at a Fun-eral parlour, is rather 'hen-pecked', submissive, and charmingly immature for his size, many times depending on Lily to make decisions for him; Lily {Lady Vampire; Dracula's daughter} is the dutiful {though lovely} and dominant housewife {as seems to be de-regeur in present society, primarily inspired by the insecurities and perceived "victimization" mentality of enmasculated women}; Grandpa {Dracula/Mad Scientist}, the 'crazy' and elegant inventor {probably the most 'Satanic' character herein}; Eddie {the wolfman/boy} seems the typical child besides the pointed ears and fangs, with rather rudimentary concerns and common experiences {even the other boys in the neighborhood seem to 'accept' him - which would be giving them too much credit, in My opinion}; Marilyn {ironically, the herd's archetypal ideal as reflective of Marilyn Monroe, considered the aesthetic outcast of the family - the "white sheep", as it were}.

Overall, the projected Rockwellian ideal who just happen to look different, or as appropriately stated in one episode, the "Family of The Year" on Halloween. A mutation of herd culture. 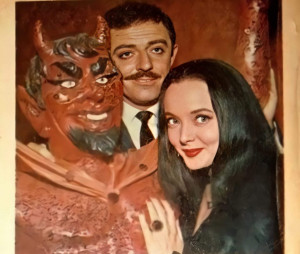 I believe the Satanist would relate more closely to this functional family unit, inasfar as virtually everything is concerned. They live on their own terms, reside in a beauteous total environment, and passionately pursue their "dark" arts and personal interests as part of their nature. Psychologically and aesthetically counter-culture. I Am almost fancifully sure that somewhere in the manse was The Addams Family Ritual Chamber with framed reproductions of The Nine Satanic Statements and The Eleven Satanic Rules of The Earth is somewhere on the premises!

Gomez, a noble Spanish {an exotic foreigner} Millionaire {proles seem to resent the independently wealthy, whereas the Satanist strives to achieve such prominence} Lawyer {an automatic villain}, Stockbroker {responsibly maintaining his wealth} and bon vivant, with that certain 'crazed' gleam in his eye which portends genius. His most memorable line in My estimation: "I think someone down there likes us!" Also in an amusing note, it has been alluded that he is a part of some mysterious lodge wherein he holds the likely title of "first-degree snake". He enjoys his indulgent cigars, pursues his hobbies with trains, yoga, fencing, and maintains that certain joie de vivre typical of the cultured man of the world. Basically, the incarnation of The Devil as a Gentleman, and an ideal emulation.

The beautiful Morticia, graceful and elegant, a true Lady, in that alluring skin-tight black dress, demonstrating the Command To Look while leaving much to the imagination is surely a Satanic Witch in her own right. She is quite the renaissance woman as well, applying her talents to art, sculpture, poetry, music, and literature, and excelling in each. A Lilithian enchantress for Satanic Witches to emulate in My opinion, even though she also happens to be an E.C.I. of this Warlock.

Uncle Fester, the "crazy uncle", as it were, bears a resemblance to Aleister Crowley with his bald head, black frock, fascination with The Occult, Science, and mideival torture devices used to therapeutic ends, and is the prime Lokian jester of the family, displaying that child-like vitality which is often indicative of genius.

The children, Wednesday and Pugsley, are concerned with what pertains to them, and care nothing for the herdlings who are continually thwarted in their attempts to homogenize the superior Addams progeny down to their conformist programming.

Probably the most disturbing element to the herd would be in the fact that The Addams Family are archetypically representative of REAL attributes of the Alien Elite. Nucleic progenitor Charles Addams has stated that these characters were based on the albeit exaggerated personalities of his own relatives, taken to a melancholy and morose bent, although upon observation, it can be plainly seen that The Addamses are life-loving personages who happen to be surrounded with memento-mores with which to appreciate the great indulgence that much more. And in Gomez and Morticia's case, is displayed in their fiery lust for each other. All because it is inherent, it is not as if they 'try' or go out of their way to shock and horrify, but because of their natural state, cannot help but be themselves, which frequently proves to be confusing, frustrating, and otherwise terrifying to the herd.

It should also be considered that both of these series premiered in the wake of the Civil Rights movement in the latter part of the 1960's. It seems The Munsters was a propagandizing attempt to promote racial integration and gender over-identity in the form of these classic movie monster depictions to state in effect that, "we look different, but we're just like you." Whereas The Addams Family asserted a true difference by virtue of their very being, predispositions, propensities, attributes, and attitudes towards the darkly themed. A family of De-Facto Satanists with each member bearing consideration based upon individual merit.

Another element is observed in their very family structure: it seems these perceived personalities may be the result of passive-aggressive projections by the masses as to what a wealthy family may be like - perhaps to them, what seems unobtainable to the mediocre, which inspires jealousy, must be of a freakish nature, also calling to mind the exaggerated blue-blood history of European families being in-bred, deformed, hersuit, etc., resulting in various mutations may be an influence, wherein The Addamses revel in their lineage of iconoclasts and fiends, yet obviously worthy outside relations are accepted. Generations reside in the mansion, which lends to European influence, which is much more the 'norm' overseas, and is definitely not the prescribed model of typical American stasis-quo; and as it is known, whatever is perceived as 'foreign' or 'different', is often automatically demonized by the ignorant, and in this particular case, there just may be a reason.

Overall, along with The Addams Motto, "Sic Gorgeamus A Los Subjectatus Nunc" {"We gladly feast on those who would subdue us"}, the Satanic axiom that could also easily apply is "...So if "evil" they name us, evil we are - and so what! The Satanic Age is upon us! Why not take advantage of it and LIVE! [evil reversed]" - {The Satanic Bible, ASLV; p. 63}. ∞