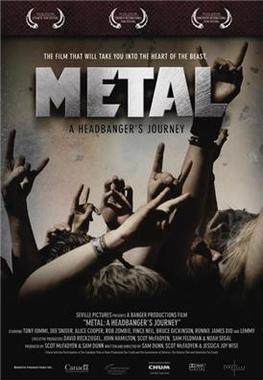 I just had the opportunity to view this recently, and was pleasantly surprised by most of it. That is to say, most of it contained experiential fact and personally relative observations, although the subject of Satanism is gleaned over far too superficially, with only far too brief commentary by Reverend Baddeley. The presentation is divided into several segments according to categorized designations and tour travels.

The roots of the genre are discussed from bluesy inceptions to its more perfected evolutions with Black Sabbath to Dio to Judas Priest and Iron Maiden, under the heading of several catagories with a rather incomplete listing of bands. What particularly interested Myself was the subject of 'Black Metal', citing Venom {who coined the term}, Mercyful Fate {King Diamond's seperate band by his namesake was also brought forth in this period}, Bathory, and Celtic Frost {in My opinion, more could have been added to that list such as Possessed and early Slayer, circa Haunting The Chapel through to Reign In Blood; Running Wild, Destruction, Exorcist, and Infernal Majesty} in the graph - all of whom are still performing, with greater stage shows overseas; and that is another dynamic noticed herein, in that the energy-filled, invigorating, vice-laden way that it used to be like in the states is apparently present in Europe, as displayed in the Wacken Festival in Norway; and all of the earned ire from christians as well, as evidenced with Europe's own recent foray into the Satanic Panic paranoia, to the thrill and eustress of church-burning devil-worshippers and cowering christians alike.

Just a couple of points of contention:

Possessed is most definitely Black Metal, if that is to be catagorized as relating to The Occult and direct references to Satan, whether or not it is ideologically accurate is another matter altogether. What is imperative in the consideration of musical genres, is the entertainment factor, not whether or not it is expressing actual philosophy. That is what lectures, learning academies, and one's own personal study is for, not concerts and record albums, neither horror movies nor horror-fiction books for that matter. The key words are 'theatrical' and 'entertainment', not 'educational', for the most part.

I also noticed there is an odd listing for so-called "Stoner Metal", which very well could apply to every catagory, if one is to contemplate the usual activities associated with the types who generally listen to Metal {as seems to be the case with all other genres as well, as it seems to just be a preferred herd proclivity, musical preferance notwithstanding}, but not in some cases. To clarify, Candlemass would definitely fit into the 'Power Metal' category, even though they coined the term "Doom Metal" to describe the band.

In My estimation, this anthropological documentary captures the underlying sociological elements of this subculture, from the carnal and lusty, to the horror-shock theatrics which always gains attention. Out of its millions of fans, a few commit suicide despite the music, while multitudes besides have actually been prevented through the use of this aggressive and therapeutic form, where frustrations can be shouted into the air to the lyrics, and head-banging, fist-pounding, slam-dancing is a veritable alternative to the such afore-mentioned anti-productive cessation of life. As with the lyrical content, discrimination is necessary, and should not be taken by wrote, but is generally intended for amusement only. It is asserted that Metal can actually be life-affirming in its adrenaline-rush, and as with everything else, a balance is imperative to maintain perspective.

Metal: A Headbanger's Journey is an overview by an actual Metal fan about his own scene and lifestyle, thereby, the 'expert' - and despite some of the innacuracies inasfar as the "lists" and "catagories" go, the film footage and interviews are of worth. So whether or not you appreciate this music, it does provide a real view into the genre for both an anthropological sense, and if so inclined, an evocative one.

{Both titles may be ordered through The Darkside}.
Tags: spechtreum
Subscribe