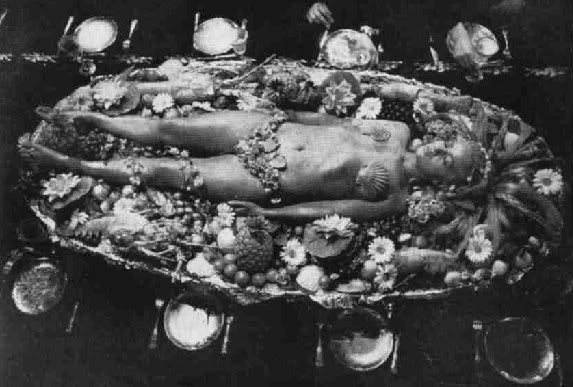 "One seminar on "Cannibalism and Human Sacrifice" covered the subject in more than just words. Students were invited to partake of a cooked thigh of a young white woman.The leg had been biopsied and provided by a Berkeley physician who attended Anton's lectures regularly. Diane basted the main course of puaka balava, "long pig", in Triple Sec, fruit juices and Grenadine. She served it with fried bananas and yams, just as the Fiji Islanders did, adding Tonka bean wine and caterpillars to round out the meal. The meat was described as tasting somewhere between pork and lamb, with a consistency rather fibrous like pork chops, but sweeter, and not quite as tender or salty as lamb. The diners exhibited little squeamishness except when it came to eating the caterpillars. But the LaVey's three-year old daughter, Zeena, finished them with enthusiasm". ~ From 'The Secret Life of a Satanist', by Blanche Barton.

Hufu is a supposed tofu-based product that is meant to resemble, as realistically as possible, the taste and texture of human flesh. It is unknown at present whether the product actually exists, or whether it ever existed, and as such, Hufu has been alleged to be an illicit scam.

Until the recent closure of the Hufu web site, Hufu was touted as "the healthy human flesh alternative" for "cannibals who want to quit", as well as a product for anthropology students studying cannibalism. The morbidly humorous nature of the product and its official descriptions led many Internet users to suspect that Hufu was little more than a prank on the part of its creator.

Mark Nuckols (founder and CEO of Hufu, LLC)—then a student at Tuck School of Business—claimed that the concept of Hufu occurred to him while reading anthropologist Marvin Harris' "Good To Eat: Riddles of Food and Culture" and simultaneously eating a tofurkey sandwich.

Samantha Bee of The Daily Show has interviewed Nuckols. In the interview, he said "I think that a lot of the pleasure of eating the Hufu product, is imagining you're eating human flesh. For that moment, you can join the fraternity of cannibalism... If you really want to come as close as possible to the experience of cannibalism, Hufu is your best option."

Many people who have attempted to purchase products from the Hufu website report that they never received the products they ordered — whether actual Hufu or related apparel.[1] These customers also claim to have been unable to reach Mark Nuckols or his company when demanding refunds of their purchases. Several say they have had to contact PayPal directly in order to secure refunds.

These customers believe Hufu to be a scam, and the actual product to be nonexistent. This theory may be proving itself correct, given the sudden and unannounced closure of the Hufu home page as of summer 2006.

At present, no confirmed or reliable claims can be found of anyone's having received Hufu purchased via the company's home page, and the website is no longer accessible.

Personally, I prefer some hearty beef in whatever form, the perfect meat in My opinion, from hamburgers to chili, to stew to steaks!