Church of Satan Altar circa The Magic Circle: Camazotz "Demon Bat", Draegon emerges through The Trapezoid

The Camazotz virus is doing well and continues to spread across the planet, taking more and more lives, as is justified for those creatures mistreated throughout the decades. It emerged in justified recourse and as continual sacrifice unto ME, initiated for DRACMAS. In cooperation with Camazotz & Pazuzu; By Pazuzu, in the name of Camazotz!

Something Evil this way comes... Shadowmancy Manifestation of CAMAZOTZ
The Seventh Statement

Ever since I spotted that terrible photo of a bat sitting in stew with its stomach sliced open filled with soup, which was most likely cooked alive, as the peasant tend to think that this adds flavor, I knew that something had to be done! As a matter of fact, that very bat has served as a vessel for the malediction!

I maintain that most animals are not fit for consumption and would either be better left as pets, friends, or just left alone in nature. Being another animal, there can be mutual respect. 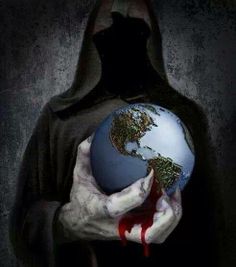 I have released punishments before, like the pre-Katrina tsunami for the abuse of snakes by skinning them and throwing them in oil alive {not to mention cephalopods tortured as a novelty!}, and always the disgust and anger felt whenever contemplating that atrocious dog eating festival in China, not to mention other atrocities all over the world, which will each be answered in kind, individually and collectively. This has been building up for awhile, also due to the inhumane treatment of harvesting certain canines for their pelts, mutilated, skinned and left to die! All this suffering energy now directed for justified vengeance!

To wit: 1. Mammalian farm animal meat like Beef, Pork, chicken; & otherwise fish. Other meat tastes gamy & unpleasant, 2. the humanimal palate senses something is not right, and would only possibly be consumed for extreme self-preservation. Otherwise never. 3. No consumption of insects, cephalopods. There is good reason these result in certain diseases.

Wrong: 1. Anything entailing the torture and mutilation of the creature. 2. Asian dog & cat eating activities & events, 3. harvesting pelts or animal parts. 4. Hunting for sports & games. 5. Bullfighting, 6. dogfighting 7. rooster fights, etc., 8. anything that entails the unnatural or coerced participation of animals for contest or sport resulting in mutilation or death. These can be suitably modified for entertainment, art, and exercise without the torture or death of the animal.

Technology has sufficiently evolved to exclude such practices, and create or replace, or substitute adequate or superior products. Civilized societies need not partake in these primitive methods.

It occurred to Me that the way The Camazotz Curse is playing out is very similar to The Stand by Stephen King {"corona"..."king"...? Hmmm, very interesting!}, that I found Myself gaping when watching the promotional video for the film. WOW.

Makes Me wonder why King says it is not like this current plague, when it is almost identical? Maybe he just wants to avoid the association with the reality of the deadly plague with his work? But to Me, it seems quite almost prophetic, as tends to happen from time to time with writers, who delve into the deep subconscious, sometimes pulling forth unintended clairvoyant impressions. Also not to mention admitted prophets like Nostradamus.

A-Massed consciousness permutations accessed and materialized both etherically and unconsciously by certain political entities making the order to produce such a virus {terrorism? 'pandemichemical' warfare?}, then further subconsciously influenced by individual scientists with unintentional mistakes sourced in sublimated productions? Timed about Dracmas to manifest sacrificial energy for The Draegon. Placed into motion with thoughtform materialization... combined with justified recourse, all elements prone to surge. All it took is for Strong individual desire to break loose! Combination Lock Principle in order.

Regarding the herd hoarding tissue paper, food, and antiseptic lotions and soaps, the government said even during these so-called "lockdowns", citizens may go to and fro to necessary excursions, like to the market, hospital, etc., so you may go about your purchasing routines like normal, and return as needed. DO NOT HOARD.

People should at least become a bit creative about facemasks nowadays - how about getting out those Halloween masks, mouth mask coverings with imaginative designs, from skull & monster jaws, even Alien facehuggers. Halloween frivolity all through this period! Ninja zukin & fukumin {mask & hood}, and of course, it would also be as easy to pull up a turtleneck over one's mouth and nose.

I did find some interesting synchronicity that coincides and supplements the veracity of this plague curse.

For instance, besides "Corona" meaning "crown", King Camazotz. Per Alphabetic numerology, add the number of letters to the alphabetical quotient:

Even the alternate nomenclature "COVID-19" results in SATAN!

MAGIC is not only psychodrama, it is a key to the manifestation of Sorcery. A complementary ascension. Psychological to the parapsychological, a key to the paranormal. On the efficacy of utilizing real materials for Greater Magic practice, following are additional suggestions & guidelines regarding tools and Altar implements:

_________
* For the performance of a Black Mass, acquiring a "transubstantiated" communion wafer, actual crucifix from the chapel, and blessed "holy water" by a priest, via the art of deception.
Collapse