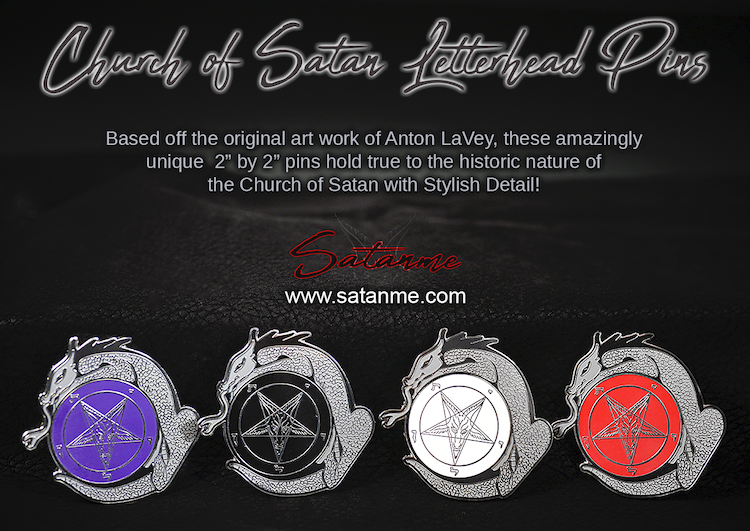 To the blasting demonwinds howling across this Hellscape, as the squawks of ravens betoken an arrival, the presence of a new possession to be welcomed and brought to The earthly Infernal Throne, an offering wrought of Devil's fane, the denizens rejoice!

An incredibly hellegant piece that seems essential, especially for one whom The Dragon is a primary iconographic inspiration. Used as letterhead for The Cloven Hoof newsletter and Church correspondence as well being featured throughout The Satanic Bible, it is a most potent piece that will absolutely enhance aesthetics and overall atmosphere and psychodrama!

Whether pinned upon your lapel, tie, or used as a broach upon a robe or to fasten a cape, it may even be used upon one's bag. At a heavy duty 2x2", the pin features two spikes for secure fastening, and available in four shades for prideful decoration & personal applications. Hail The Satanic Draegon! ∞

A veritable Halloween treat arrives as I Am pleased to welcome King Diamond to The Noctuary!

Figure presented in traditional Mercyful Fate configuration complete with infamous crossbones microphone! While the other hand in the sinister Cornu gesticulation! The turntable can become a veritable stage! There are also glow-in-the-dark and black variations. Very Kenner-style form kinematics {"Kennermatics"}. As a matter of fact, a very similar cape to that of Darth Vader!

Into The 'Coven', He joins another Satanist, Church of Satan Magister, The Sinister Minister James Mitchell! ∞ 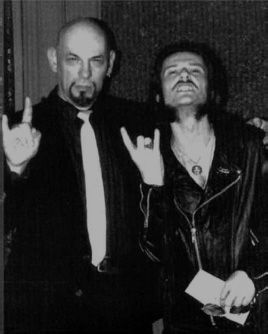 Once upon a visitation: Magus Anton Szandor LaVey & King Diamond!

IRON FIST: You also mentioned Anton LaVey, former head of The Church Of Satan. By all accounts he was quite a character, whom you met more than once.

KING DIAMOND: “I was very close to LaVey for a while – I dated one of his daughters actually. He was very serious about what he wrote in ‘The Satanic Bible’. He managed to put into a book what I had always felt. It’s not like I read the book and said ‘I wanna be like that!’ I recognised myself in his writing.

“Once I was invited to come to the Church and spend a whole night there. I spent two hours in the ritual chamber with him. It had been re-energising for over a year and a half and no one had been in there except him. There was a very high altar, a sleigh from a Russian Czar who had used it to drive his witches to and from court; there were original books – all kinds of stuff in there. There were 13 rooms and he could enter all these rooms in full secrecy. There was an iron maiden, which was actually a doorway from another room. It was an amazing experience. Instead of me just going in there and waiting for him to speak, I told him that I would like to speak first and tell him what I felt about the Satanic philosophy. I spoke for about 45 minutes after which he took his Baphomet sigil off and pressed it into my hand; it just said everything. Then we talked for about an hour and a half. He played keyboards for me that night – could’ve been music for a horror movie – and then suddenly he switched into ‘Wonderful Copenhagen’, looking over his shoulder with a big smirk on his face! With his humour and just the way he was, there was a very deep connection.

“I have a hand-written letter from him, which I always carry with me. It means so much to me as he never wrote anyone by hand, he would always dictate. I told Karla LaVey that I had this letter from her dad and she didn’t believe it, so I showed it to her and she started crying when she saw what he’d written to me. He said that everything was going according to plan. I know exactly what he’s talking about, but I will never tell anyone.”

Next to be reviewed... SLAYER Demon!