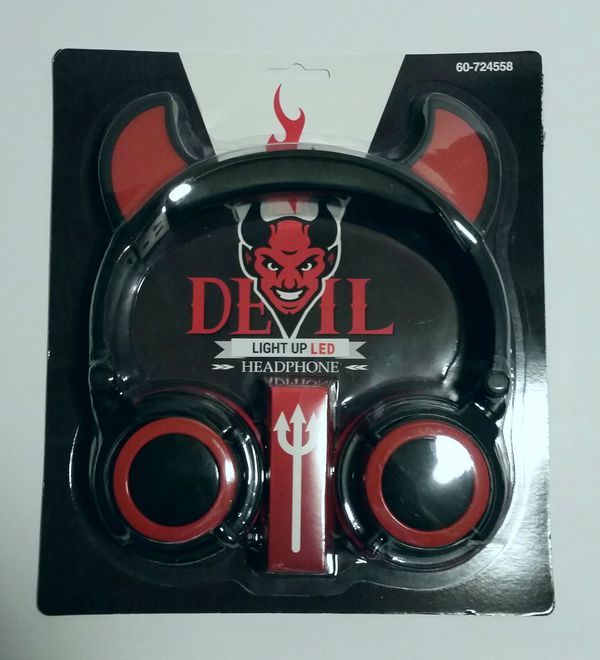 Found this amusing pair of Devil Horn earphones while out and about, which light up and fit snugly on the ears, instead of within like nubs, which skull buds are for! Being a collector of strange oddities, I possessed them forthwith! It is pleasing to see some of the multimedia manifestations appearing here and there in this Age of Fire!

The sound quality is impressive inasfar as a surround-sound experience, with boosted bass and clarity of vocals & instruments. There is a small button camouflaged by one of the horns which activates the lights, which can either stay on, blink or remain off.

Even if one may not necessarily wear them oneself, it can make for novelty decoration for an AHC, or someone of like mind! Hell, maybe the strobe function can be a veritable mating signal, as in "turned on"!

A note to ponder the packaging - the main design features a flame ascending from within an inversed trapezoid, where the crown of fire on a Demon's head where Baphomet would be, with trapezoid shapes featured both on the general design as well as the shape of the cord container itself, with a pitchfork emblazoned thereupon. The only thing that's missing are pentagrams on the earphones themselves! Which can be easily added!

The Devil has the beast tunes, which are listened to in style! ∞

Most if not all of the novelty items*, weapons, multimedia, figures, clothing, etc., I tend to possess are interesting in some manner, whether in shape of item or decoration, Satan, Batman, Vader, Ming, horror, monsters, Occult, Martial Arts, at al**., otherwise straight Hellegant black or blood red! As Magic is inevitably introduced to just about every activity!

Harkening to The Dracling, had an opportunity to try a new Darth Vader toothbrush today! And it was fun! First of all, with the tube connected, it looks like Vader's red lightsaber extended {darksaber?}, then upon removing the red casing and turned on, says a few iconic lines while the stem glows and blinks red, along with the whirl and rush of the laser movements! It remains on the duration of the brushing session. Accompaniment with proper Vader cup recommended!

Since Draclinghood, I usually possess all things Vader, from action figures, to cereal, to even jewelry! In fact, in a bit of precognitive action, My pre-Baphomet pendant as a Dracling before Infernal realization was in fact a Vader head! Being a prime manifestation of a villainous archetype, a reflection of the Jungian Shadow, it is no wonder! A psychological projection of one's character traits!

One may not necessarily notice it is a toothbrush if you didn't already know so at first glance! That's how detailed and novel this item is, like an object d'art itself for any Star Wars fantom to appreciate! Leave the casing on, and it just looks like a lightsaber ready for battle! I can picture a mini battle with a sibling or even progeny perhaps! ∞

_____________
* Never one for the generic or sterilized, programmed, or "trendy", unless either undercover, or the quality is remarkable.
** With a toy series concentration on the likes of Shogun Warriors, Masters of The Universe, Alien, Star Wars.