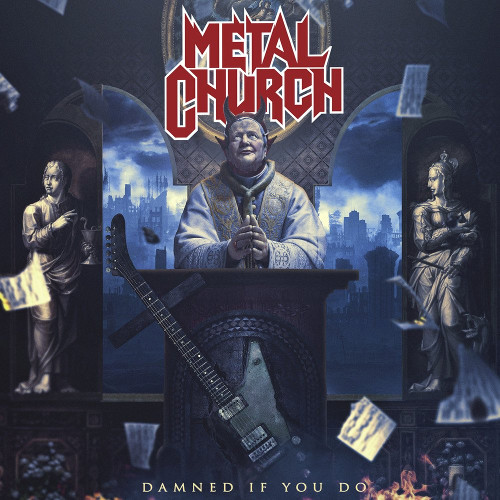 Listened to the latest METAL CHURCH release "Damned If You Do", and it pretty much sounds very similar to how they've always sounded, powerful & melodic; with themes in this one particularly aimed at the trap that work slavery rut race proletarianism is, how sheeple are just considered numbers in the system to be exploited, the guilty monkey finger pointing, initiating an unnecessary guilty conscious for deviating from the programming; all and the subsequent personal r/evolution needed to break free from such habitual constraints in order to live a truly fulfilling life, and find 'Balance' {by # 9, as in 'Koyaanisqatsi'} with doing something worthwhile and getting payed for it, looking out for oneself first. In tune with inner and outer nature surrounding.

You've been messing with the black things...

My personal favorite on this album is 'The Black Things'. The pounding drums, wailing guitar, crunching, and the malefic vocals with the song about those dangerous black things, subject matters and practices in the shadows when seeking forbidden knowledge and empowerment, in this case, an unfortunate amateur it seems. They'll either seek guidance, study better, or be scared off.

Two videos have been released in "Damned If You Do" and "By The Numbers", but the only commentary I have to say is in the general aesthetic of the band, particularly Mike Howe - why the hair gone? It seems part & parcel for the genre, plus most everyone looks so much better. I can understand Kurt Vanderhoof's bald-headed look, which made its way into Metal once upon a time for its diabolical extreme, as are the sinister bestial warrior locks, and the others still don the killer locks, so...

Still, My favorite METAL CHURCH tunes of all timeless are Start The Fire and Watch The Children Pray.

The cover features a preacher creature in the virtual "Metal Church" 'keeping The Faith', as it were, with the appropriate horns, of course! ∞