The Bells of Hell resound
The Gates are open... tonight
Emerging from the frost, they come Nightmares unleashed
Across the earth, shadows rise
For a season at a time
From Hallow's Evil to Yuletide
In the darkness of the mind

Earth quake hooves
Closer... behind... closer... nearer
The hoofbeats of your heart 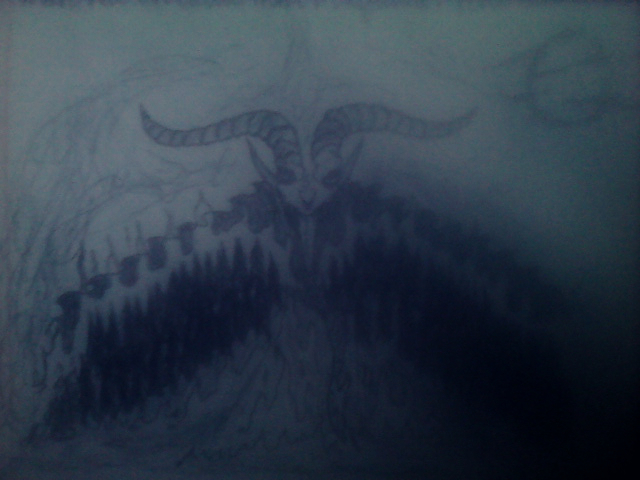 Under The Krampus Moon

Hellfires burn... The scent of flesh
Wailing on the demonwinds
The beatings of Abyssal skins
Echoing of bones
Blood upon the bramble thorns
Trailing to the foggy Pit
The bells are rung...

Chains echo from below
Krampus Demon, Winter Devil
Eyes aglow in the dark
Outside your window haunt

Prepare the sacrifices
The saintly one denies
Hellmouth opens wide
Into The Cauldron, Feast of Beast
Offering complete
Beneath Krampusnacht Moon

Unholy procession
Through the snow and flames
Calling to your name
Pentagram of blackened coal
Brimstone, sulfur soul...

"Krampusnacht", or "Night of The Krampus" takes place on the eve of "St. Nikolas", making it a sort of its own Halloween observance, wherein the demons come forth in pageants and parades bearing torches, thorned birchreeds, horns, claws, fangs, demonic beasts all! Sometimes even seen upon infernal thrones! These are folkorically intended to frighten the populace {especially children} into behaving themselves, to remain "virtuous" as a last chance, so that St. Nick will reward them with presents and treats on the 25th {actually Moloch & Dionysus/Pan's Birthday!}. Santa Claus usually makes an appearance at the end of the parade dressed like a Bishop with a mitre.

So, for the last vestiges of blessed Autumn, these demons make sure Halloween & Autumn are represented all the way up to Winter Solstice!

In traditional depictions, Krampus is sometimes seen riding along with Nikolas on the sled for punishments due, a flogging, spanking, and leaving coal instead of pastries & candy. This tradition thrives primarily in the Northern climes, though there certainly are comparisons in other nations as well, such as Japan, who has the "Namahage", and increasingly so more present even in The West!

An Olde Testament correlation can be made with Satan {"Accuser"} seated at the left hand of "God", whose purpose was said to accuse sinners of misdoings, likened the story of Job. Of course, subsequent 'Devilutions' have included a myriad of purposes and darketypal incarnations.

However, Satanists can acknowledge these beasts from Hell as veritable brothers and friends who reward the exploits of the Strong, the daring, the lustful, and the fiendishly clever with carnal delights! Krampus may be seen as a sort of "Satan Claws", as it were, and those who prefer to enjoy the Yuletide unholydays with demonic decorations more complementary & resonant of ourselves. The face of Satan dwells behind the indulgent mask of Santa, and it is seen as no small coincidence that the Satan & Santa anagram are frequently rearranged! ∞

[For more on winter traditions, see The Dark Side of xmas]