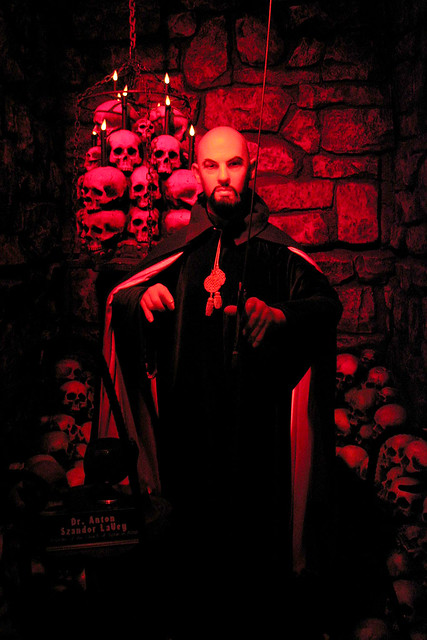 Now that the Wax Museum at Fisherman's Wharf is {temporarily?} closed, what will become of the splendid waxen reproductions therein? Perhaps it may re-open one day under new management, or the figures may be moved to add to other wax galleries, like Hollywood Wax Museum {which has a 'Chamber of Horrors'; other notables include Elvira, The Cryptkeeper, & Legend's Darkness}, along with the classic Universal monsters; or Madame Tussaud's, so long as they are preserved, particularly the unique Dr. LaVey figure, which could be placed either in a "Chamber of Horrors", as it were, or even among the 'Cultural figures' or 'Religious Leaders' sections.

It behooves an enterprising benefactor and/or the respective establishments to possess these figures and either re-open the Wax Museum at Fisherman's Wharf, or transport them to these other suggested attractions where they may be preserved and appreciated. ∞

UPDATE 10/27: I Am pleased to announce that Madame Tussaud's will take the property and exhibits over with a grand San Francisco opening in remmus XLIX, in cooperation with The Dungeons attraction.

A rather 'hip chick's car breaks down, so she decides to take a walk in the woods in search of help - instead, a towering deformed creature helps himself.

Upon the death of a relative, a young couple come into possession of a castle in the countryside*, where an elegant vampire couple, the Count & Countess 'Townsend'** {actually The Draculas} resembling a prototypical Gomez and Morticia combination reside. The mortal couple decide to visit and horn in on their business, despite considerate attempts to scare them off, are determined to stay and have the prevailing vampires evicted. So they are imprisoned down in the dungeon for their trouble-making, along with several others who have crossed their paths before, who are kept just alive enough to provide with sanguinous sustenance.

They arrive just shortly after family member and sadistic werewolf/serial killer Johnny does. Also present in the resident butler George {John Carradine}, loyal, thoughtful, and efficient, who quite literally serves up the 'Bloody Mary's', and one 'Mango', a sort of Igor type servant met in the beginning, who amicably takes care of the dirty work, and the retrieval of girls for necessary life's blood, as well as being an enforcer along with Johnny.

Seems that George is also the priest of a moon cult, whom all present, or so-called "people like us", adhere. The newly-arrived victim is sacrificially immolated to Luna, upon a nearby sacred hill. While all are in a festive mood, one of the prisoners scurrilously obtains Johnny's firearm, and runs rampant about the castle, dispatching the residents. And despite Mango's noble efforts, sadly tumbles in a fiery dive.

There were two remarkably strange discrepancies herein in discordance with typical folklore: First, werewolf Johnny was shot 'dead' without a silver bullet {which would hypothetically mean that he will rise again - also if he actually 'died', he would become a vampire}; and two, it seems that the Townsends did not demonstrate the inherent 'undead' strength or powers of hypnotism typically attributed to vampires - otherwise, they would have easily loosed their bonds to avoid the sunlight while keeping the intruders under control.

In conclusion, all they would have had to have done is merely sign over the real estate documentation to the Townsends, who have resided there for centuries, to avoid all their problems, yet they stubbornly persisted, then lied, and so, had to undergo persuasion. ∞
- Dr. Dracenstein.

_____________
* Of note, the film begins at Marineland, where they discover their sudden inheritance upon the tower.
** The role of Countess Townsend was originally intended for Jayne Mansfield, before her unfortunate association with Sam Brody resulted in her demise.