The plasma ball is ideal to represent The Black Flame, and makes a perfect complement to The Altar. If you have a leveled foundation, like a three-tiered bookcase, it would be perfect to place on the bottom shelf, forming an inverted triangle pointing to The Black Earth & "Hell", in combination with the lighted candles on either side of the Tabernacle of Satan.

Plus, the very fact that the tendrils are attracted to the touch further exemplifies this premise, and makes a wonderful statement for the interrelation of Magic & Science.

It seems that I have always had one of these in successive evilutions of The Altar; I used to place it on the Altar face itself, and when the lights were extinguished, it glows ominously underneath The Baphomet sigil {which was treated with phosphorescent wax} and the luminescent trapezoidal frame acting as a dimensional doorway. A powerful psychodramatic spectacle sure to potently stimulate the neuro-bio-adrenal energies into the atmosphere. ∞ 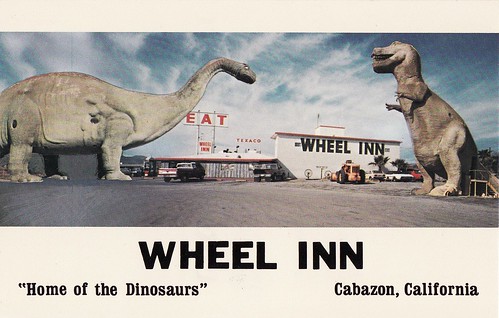 So the historic Wheel Inn Restaurant in the Kingdom of Cabazonia is currently closed, albeit temporarily, for either renovation and/or managerial transference; either way, it shall be open for business again in due time, thus adding to the charm of this land of prehistoric wonders. It has been featured prominently in Peewee's Big Adventure, and Tears For Fears' Everybody Wants To Rule The World" music video.

What drew Me to this quaint establishment is the classic "EAT" sign off the side of the road of Route 666, accompanying the giant dinosaurs created by Knott's Berry Farm artist & sculptor Claude Bell as his first project {who also ran The Wheel Inn}, of course - a brontosaurus named 'Dinny' and a Tyrannosaurus Rex named "Mr. Rex", now attached to a maze of dinosaurs somewhat likened a 'monster island', which was an amusing excursion.

The atmosphere is most definitely a diner experience with an Old West theme. My visits there were most gratifying, with quick attentive service and delicious repast. Featuring pinball machines, velvet paintings, home cooking, operational payphones, a gift shop, even a prospector and his trusty companion stationed outside bidding patrons a welcome and a come back soon... ∞