KISS Meets The Phantom of The Park review included on the site! 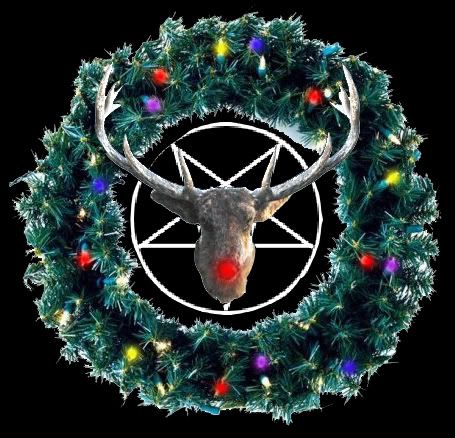 A few people in Lisa Jensen's subdivision say her holiday ornament is disrespectful to those serving in Iraq. They've threatened to fine her.

DENVER -- A homeowners association in southwestern Colorado has threatened to fine a resident $25 a day until she removes a Christmas wreath with a peace sign that some say is an Iraq war protest or a symbol of Satan.

Some residents who have complained have children serving in Iraq, said Bob Kearns, president of the Loma Linda Homeowners Association in Pagosa Springs. He said some residents have also believed it was a symbol of Satan. Three or four residents complained, he said.

"Somebody could put up signs that say, 'Drop bombs on Iraq.' If you let one go up, you have to let them all go up," he said Sunday.

Lisa Jensen said she wasn't thinking of the war when she hung the wreath. She said, "Peace is way bigger than not being at war. This is a spiritual thing."

Jensen, a past association president, calculates the fines will cost her about $1,000 and doubts she will be forced to pay them. But she said she's not going to take it down until after Christmas.

"Now that it has come to this, I feel I can't get bullied," she said. "What if they don't like my Santa Claus?"

The association in this 200-home subdivision 270 miles southwest of Denver has sent a letter to her saying that residents were offended by the sign and that the board "will not allow signs, flags etc. that can be considered divisive."

A Piece of Peace

It has been conjectured that the so-called "peace symbol" has Satanic origins, but more specifically, it is actually a Nordic Rune known as the "Algiz" rune to be precise. In this case and in a reversed position, it supposedly symbolizes "peace"; whereas upright, it signifies WAR. Christian stuporstition has stated its "satanic" inversed position supposedly derives from a practice within Le Messe Noir, of breaking the arms of the cross downwards towards Hell, demonstrating a denial of "The Holy Trinity".

Satanically speaking however, this would be idealistically correct, and this why:

Its resemblence to the upright cross not only represents christianity, but all blindlight religions as a whole, as they contain the same basic type in motivation, with only various names of same.

In its newagey "holy", or upturned position, it signifies "holy war" - Inquisitions, the destruction of tribal cultures, The Crusades, the "Witch tryals", etc., ergo, WAR. However, in its resemblence to The Devil's Pitchfork, it represents liberation against spiritual delusions and enslavement for mental liberation. The first step to Evolution is Revolution!

In its inversed position {inverted cross}, there truly may be more actual peace and tolerance, because man would have learned to accept himself by the recognition of reality and nature, thus attaining peace of mind and body {"Satanic Grace"}. Expressing emotional outlets when needed, overall becoming more emotionally, mentally, and physically healthy as a result, ergo, attaining "The Age of Fire", i.e., the notion of an 'external God' is beneath; Satan above, or God The Self is above.

In the end, the so-called "peace symbol" can indeed be translated into a symbol of The Occult, as the 'hidden meaning' was there all along. Although because of its current cultural significance, it has assumed the repugnant connotation of indicriminate fecalitarianism for the masses. Much like the hated Swatztika, as a matter of fact, which itself is originally defined by ancient cultures to signify "Buddha's heart", symbolic combinations of four elements, etc. Iconography, like deities, frequently reverse roles to suit the dominant culture's perceptions of morality and herd control.

I dislike the so-called "peace sign" and all that it represents. It represents egalitarianism in all of its foul manifestations, where mass-consciousness takes prominence, where there is minimal to no sense of appropriate discrimination.

The so-called "hippie-originated peace symbol" done with two fingers figuratively connotes a rabbit, a prey animal, a favorite of wolves - it attracts predators the same way the moron displaying it pokes their head out amongst the wolves.

Interestingly, in Europe, the hand-sign is turned and thrust upwards to symbolize the vulgar "F-you!" expression.

Similarly, the so-named "1/2 a peace sign" gesticulation resembles an erect phallus as a display of Power, rebellion, as well as challenge. The fertile expression of a warrior about to do battle against the object of antagonism.