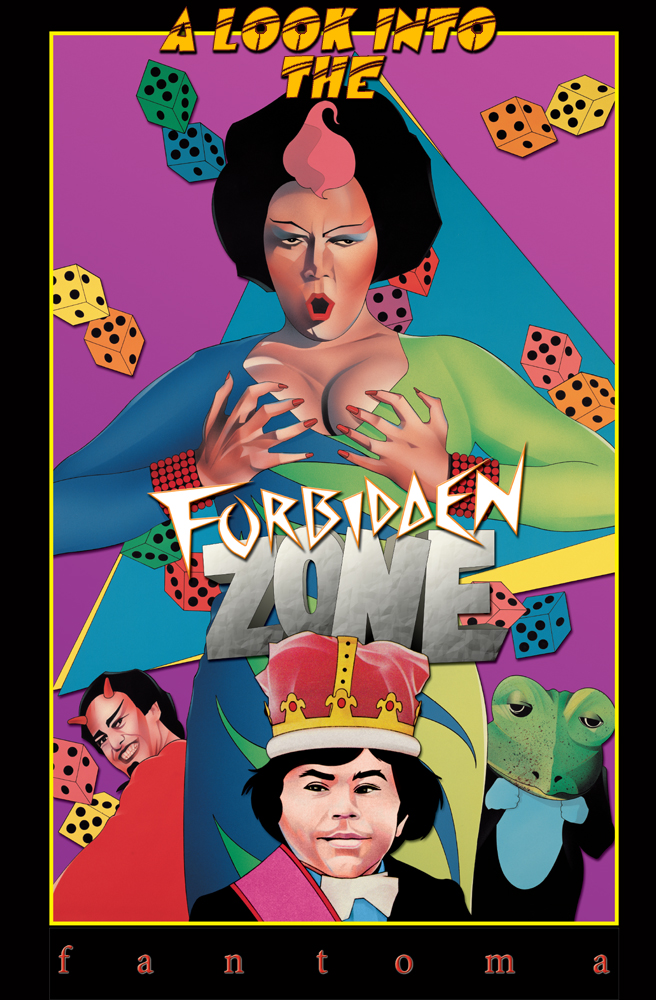 The Elfmans really outdid themselves with this wonderfully weird nascent-Boingo {introduced as 'The Mystic Knights of The Oingo Boingo' at the time} film about members of a stereotypical Jewish family who go searching for their sister "Frenchy" {Marie-Pascale Elfman, Richard Elfman's wife} into the Sixth Dimension via a mysterious door opening up in the basement of their home, displaying a hellmouth entrance through which one must travel down an intestinal tract finally exiting the other end...

Little King Fausto {played by Herve Villachaize of Fantasy Island fame} falls in lust with Frenchy to the jealous ire of Evil Queen Doris {Susan Tyrrell}, who was hatched from a "witch's egg" {great song, by the way}, and sets out to torture the combativaly-resistant girl. She realizes this infatuation when Fausto moans her name after intimacy. Chained to a rack, the session ends with a glowing rod inserted in a spot best left to the imagination. I thought it amusing contemplating the suspended human chandelier grasping two candles, which retains its skeletal arousal even after excarnation!

Grampa and Flash Hercules go searching down the twisting entrails to the 6th dimension to find Frenchy and come upon an old Yiddish man operating an information stand exchanging sheckles for clues. Oi Vey! Along the way, they enact dorsal coitus with every female they see, until the criminally-insane Rasputin-lookalike Grampa Hercules wrestles a gorilla to an overkill.

High weirdness typifies "Bim Bam Boom" in which two singing boxers are joined by a strange doughy crooner in a Spanish diddy, about "dark girls in the sun" while wearing, of all things, a Mickey Mouse hat. Bust Rod The Frog joins in dancing with Frenchy... wow...

Amusing scenes include a school house rendition of The Three Stooges' "Swinging the Alphabet" {from 'Violent Is The Word For Curly', circa 1938 c.e.} with various students' performances including The Kipper Kids {as two Heidi-like characters}, Squeezit {gay "Chicken boy" who flaps his bended arms like wings}, a troupe of pimpish negro dancers {who perform, among other things, the "robot", "locking", and "break dancing"}, and a older Jewish gentleman in a propeller hat.

Most notable is "Red Wolf" Danny Elfman as a white-clad Devil performing a modified 'Minnie The Moocher' while striking a deal with Squeezit for sexual gratification with The Princess {Gisele Lindley}. Squeezit is captured by 'Bust Rod' the servant Frog and turned over to The Devil's black robed and faced Minions. On the way to Hades, one of them informs Squeezit "The Master's been dying to stick his pitchfork in that there tomato!", referring to The Princess. He delivers, and saves his friends from certain doom, at the cost of his head, which then begins flying around on angel wings.

Another memorable scene includes the song "Pico and Sepulveda" {performed by Felix Figueroa and his Orchestra, which this writer recalls being played on The Dr. Demento Show a few times}, which is a sarcastic tribute to that Los Angeles intersection, featuring gridlock and pumping smoke stacks with trapezoid towers.

Pico and Sepulveda
Performed by Felix Figueroa and his Orchestra, Composed by Eddie Maxwell and Jule Styne
{Ambassador Records, 1947 (b/w "She of the Coffee Brown Eyes")}

The former queen comes back for revenge and does battle with Queen Doris, who employs a very surprising distraction, landing the ex-queen, and eventually herself, impaled at the bottom of The Pit. The film concludes with a cast closing number featuring all the delightfully odd characters in a rousing finale.

With avant-garde sets, demented dialogue, hilariously unorthodox loony tunes, playing on stereotypes, dare take an exciting journey into the fun comedic insanity of The Forbidden Zone. In many ways, it seems that this film served as a zietgeist contributing greatly to the 80's aesthetic, in all of its uniquely bizarre glory. [5/5] ∞

Caught this evocative film tonight, which comes greatly recommended for all those who appreciate Danny Elfman's ingenious orchestrations and Richard Elfman's exhilarating madness. A relatively little-known gem well worth the acquisition.
Collapse