To the strains of "Rock 'n' Roll All Night", the film begins with the members of KISS in various poses and locations, in gigantic proportions playing in the sky, towering over rollercoasters, walking on laser pulses, and riding the track. Switch to concert footage featuring the massive stage show using torches, smoking guitars, sparks, explosions, props, stroboscopic lighting, fog, a rising drum platform, and... fire works!

The Four-Crown Princes of Rock 'n' Roll Hell are being set up by evil super-genius Abner Devereaux, who desires to frame the band by using impersonating robot clones to take over the world using diabolical mind control, to brainwash fans into causing a riot.

First for the framing is Gene, whose robotic double smashes up portions of the park, including bursting through a brick wall, trashing a stand, and roughing up some security guards.

A girl named 'Melissa' {Deborah Ryan} searches for her fiancee', a photographer who falls under the control of Devereaux. She encounters KISS outside the concert, who provide a clairevoyant clue to his whereabouts. She eventually becomes their acquaintance, and attends a private performance with an instrumental rendition of "Beth".

Filmed primarily at Six Flags Magic Mountain in California, the quartet battle the albino wolfmen at the Collosus rollercoaster, the movie villains within the Chamber of Horrors, and the martial arts characters at a stadium, all dispatched with sparks and explosions.

KISS preserve their collective emblems within a box in their chamber {all resembling their symbolic characteristics - a dragon for The Demon, a star for The Star Child, a lightning bolt for The Space Man, and a cat head for the Cat Man; which all rather resemble cookies, interestingly enough}. The Demon spouts fire and can roar like a lion {no trademark blood-spitting here}; The Star Child emits a pulse blast from his starry eye which can both destroy and paralyze; Space Ace has the power of dematerialization and laser blasts; The Cat Man is highly dextrous; and all have the ability to fly.

Devereaux sends the zombified photographer to do his henchman work, to blast the emblems with a laser ray, which weakens them enough to capture through vaccum tubes in The Chamber of Horrors. They are imprisoned within an electric cell and witness the crowd's mental manipulation via a small monitor in Devereaux's Chamber. Not to be kept down for long, KISS use their joined mental telekinetic force to retrieve the talisman box and revive their energy. Flying in from the sky, the final battle is waged on stage with the clones, and they are victorious.

KISS became a major cultural influence in the 70's, with omnipresent merchandising from action figures to make-up kits, cartoons, comic books, to clothing, and all manner of conceivable accessories. Essentially party rock, KISS was an alternative to the Disco proliferation occurring at the time, with the creation of these four characters in mime makeup and fantasy-costumes, creating a living Halloween theater spectacular hardly matched to this day, with the possible exception of Venom, who truly brought a literal Hell to the stage, with resplendant displays of Satanic iconography.

To that end, in the 80's KISS actually earned the ire of evangelists during the SRA-obsessed period of American society, were placed on warning lists along with many others, as numbered amongst the musical agents of The Devil, and became thusly presumptuously labelled with the "Knights In Satan's Service" acronym, which of course, the band played to the hilt, as it only added to their showmanship. The double-SS's in the logo were particularly cited as suggesting some far-flung connection to the Nazi SS, which has since been proven irrelevant.

Overall, KISS Meets The Phantom of The Park comes off like a cartoonish "made-for-TV" movie, but is amusing for what it is. 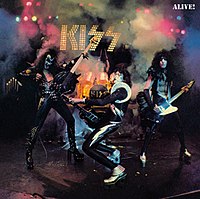 Personally, as a Dracling, KISS Alive & KISS Alive II were among the first albums I ever acquired, when I saw them one day in a department store near the record section, which is testament to their prevalence at the time. I enjoyed the theatrics of it, and the music was essentially just for fun and entertainment. Of the four, I resonated with 'The Demon' most, even dressing up as the character for Halloween once. I eventually moved on to more serious and applicable musical forms and preferences, but this does serve as an evocation.

In the 90's, I eventually became aware of the following song named "Unholy", which seems to be more to taste from this particular musical genre, and what one would expect "The Demon" to unleash, and probably remains My favorite song from this band: