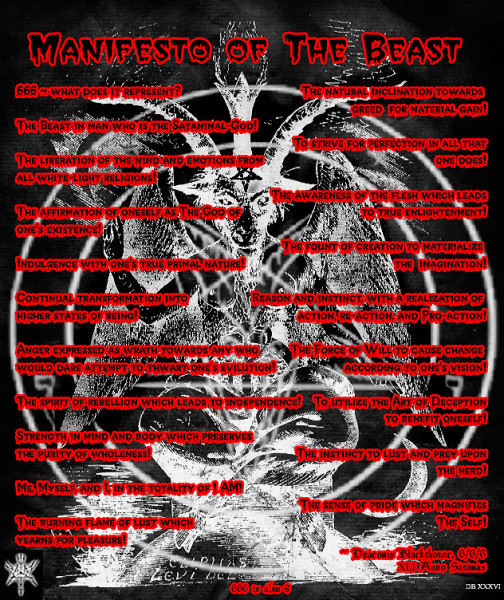 Manifesto of The Beast by DBlackthorne on deviantART

The Beast in man who is the Satanimal-God!

The liberation of the mind and emotions from all white-light religions!

The affirmation of oneself as The God of one's existence!

Continual transformation into higher states of being!

Anger expressed as wrath towards any who would dare attempt to thwart one's evilution!

The spirit of rebellion which leads to independence!

Strength in mind and body which preserves the purity of wholeness!

The burning flame of lust which yearns for pleasure!

The instinct to lust for blood to prey upon the herd!

The sense of pride which magnifies The Self!

The natural inclination towards greed for material gain!

To strive for perfection in all that one does!

The awareness of the flesh which leads to true enlightenment!

The fount of creation to materialize the imagination!

Reason and instinct, action and re-action!

The Force of Will to cause change according to one's vision!

To utilize the Art of Deception to benefit oneself!

| Much a-do has been proliferated about what the 'meaning' of the alleged number of The Beast is, through all sorts of geometrical configurations, apocalyptic prognostications, and biblical meanderings, and to The Satanist, it is merely a time to enjoy the various entertainments increasing now, to gleefully manipulate the stuporstitious fears of the herd, while asserting knowledge and reason over ignorance and fear. in which they will remain in one form or another, for it is in their unfortunate broken nature to do so.

Hypothetically, if there is a meaning to this mysterious number of the beast that is man, let it be defined by The Devil. The mystery and fascination shall continue to be, as it haunts the minds of the populace. So in the essence of this Lokian and Promethean 'spirit', the Satanist is the avatar towards the higher phase of evolution, championing the purity of being in the realization of the primal self, tempered with civility and justice. There is no god but The Self, for we are the living gods and devils projecting the will to be in our myriad archetypal forms.

SO IT IS DONE.