I had the opportunity to view this movie recently, and I feel that it did a pretty good job relating the story of Jayne Mansfield, although there are a few artistic license moments, but they seem to work in the overall.

Loni Anderson personafies her relatively well, even though she is a bit more angular than the original more curvacious and softer Mansfield, a cartoon cutie to be sure, with that little girl face and entirely womanly body. She works the bubbly charm to the hilt, eclipsing her contemporary Monroe in several ways, many times with a much more pre-meditated exagerrated effervescence, arousing men in her pink field of influence to feats of lustful ennervation, while at the same time either motivating and otherwise disturbing other females in the area. The erotically-powerful 'witchy' dynamics of a bombshell.

Early on, she discovers the formula for success, and by The Art of Deception, utilizes her assets to gain fame and fortune.

Arnold Schwarzenegger portrays husband Mickey Hargitay, a well-meaning man who is remembered primarily for his exceptional physique, which Schwarzenegger actually decreased in bulk for since attaining the Mr. Universe and Olympia titles two years previous. As her husband and confidant, he also becomes among other things, her father-figure and virtual baby-sitter towards the end of their marriage and career, while she became counter-productively selfish and obsessed with being in the limelight at all costs, even accepting roles that he and her agent felt were beneath her, such as sexploitation film roles to stripping gigs at redneck bars, much of which was attributed to alcoholism in the film. This presentation seems to attempt to portray Mansfield as uncontrolled and desperate, although source materials will attest to the opposite - she knew exactly what she was doing, and knew how to get it.

By that obsession and despite such apparent foibles, she made herself a star, establishing her iconographic prominance. It seems that to her, this was all part of the plan; she loved being on stage, in the spotlight, soaking up that raw sexual energy, and really living life to the fullest, following her passions and bliss. She created The Pink Palace, her own total environment, enjoyed being driven around in her Pink Cadillac, all while attired in her inimitable personal style, with all the shwa d'vive of a Hollywood Babylon Goddess. 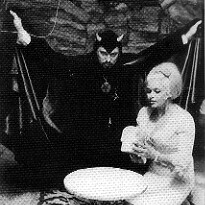 Self-made, Mansfield was a sex-bomb, mother, and business woman.

The film begins and ends with the scene of the 'accident' - the infamous mosquito-spraying truck collision, although the vile and literally accursed Sam Brody is not mentioned by name; and there is no mention of Dr. LaVey being her lover and mentor here, perhaps as a result of the limited information at the time the film was released.* With the exception of one or two, several documentaries fail to mention the LaVey connection entirely, which may be chalked up to the dreaded 'S' word and Satanophobia.

Some women are just so voluptuous, that it cannot be contained within the confines of puritanism, and to deny such innate sensuality would be a tragic waste of enormous salacious potential, which she did not squander, but knew how to wield well, for her own benefit, and that of her admirers.

_________
* For those unwary, Ms. Mansfield was a member of The Church of Satan - there are even photographs and letters attesting to that fact. In brief, LaVey placed a Death Curse on Brody, and unfortunately, Jayne was on ground zero when it manifested, despite The Black Pope's warnings for her to remain distant. Also not mentioned is LaVey's successful Compassion ritual for Jayne's son Zoltan, who recovered after a mauling by a lion at the zoo. {see 'The Secret Life of A Satanist' by Blanche Barton for the full story}.