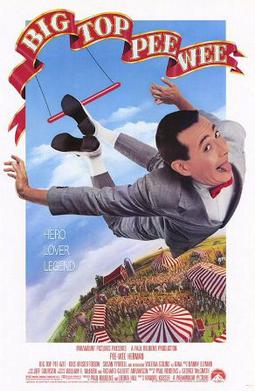 This characterization portrays Peewee Herman in more of a naturally salacious sense with a libido, as he hungrily pursues girlfriend Winnie during their daily picnic featuring delicious eggsalad sandwiches! Then the circus comes to town which is ill-received by local curmudgeons.

Oddly no playhouse {his total environment}, Jambi, chairy, chickiebaby or the rest here, which could have still worked. There's more of an impression of a Pippi Longstocking situation.

Peewee has 2 love interests! Starts off with a very normal, kind of generic but pretty blonde girl {like Marilyn Munster} Winnie, and an Italian gypsy girl named Gina Piccolapupula passing through withe circus as a trapeze girl. Winnie ends up becoming engaged to all 5 of the Piccolapupula brothers, and Peewee with their sister. It is also revealed that Peewee apparently has a hair fetish.

What also caught My attention is bodybuilder Franco Columbo present as The {Sardinian} Strong Man! Perfect casting as he is the real thing! Susan Tyrell {Queen of the 6th Dimension!; another most favored film Forbidden Zone} as the Ringmaster's miniature wife. There's the bearded lady & fat lady {sometimes one in the same}, the mermaid, tallman, midgets, clowns, trapeze acrobats, along with a slew of monkeys, a lion, show horses, a hippo, elephant, giraffe, his {chocolate milk} cow, chickens, & little pig pal named Vance. Like Animal Farm withe only human they like is Peewee.

Here, Peewee is a farmer & botanist working on a secret project... none other than a hotdog tree! However, a slight mistake shrinks the sausages into vienna sausage size, but have an extra side-effect in transforming the malcontent mob into their kid selves, who of course LOVE the circus! Perfect resolution. [5/5] ∞
_____________