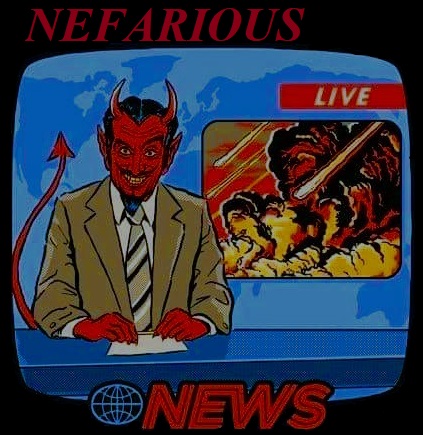 But get a load of that name! Schnork? Really? For what he believes, this mythology is as good as any other, but perhaps more entertaining!

There was an instance of parishioners walking down the street carrying their crucified god!

⸸ mary gets hammered: It is interesting how I was randomly looking at a location nearby the other day on streetview, so it must have been clairvoyance. As far as mary is concerned, she should be exposed & defiled with sexual effluvium.

⸸ gay catholic parties: Hypocrisy made evident, as they just cant get away with it anymore! Instead of using the funds from their parishioners, they should just be honest with themselves and have whatever interactions desired without any of the xian constrictions! But then, it wouldn't be xianity anymore! But more akin to Satanism in the sense that there is no condemnation for pursuing natural predilections. Statement VIII covers this perfectly.

Out of the coffin? Cassandra Peterson reveals female partner. So what? She would actually be BI {which in itself is incredibly HOT!}, but as par her sense of humor and media manipulation skills, she leads them to believe hat she's just gay, when she was in fact married to a man for several years! Whatever the case, I'm not particularly interested in the personal lives of the actors playing the character, which is the real appeal. The adventures, personality, costume, etc., not the private life of the actor portraying them! In short, that's her own business! Elvira is timeless.

RIP: Brandy Alexander. [9/14] Found dead in the bathroom - no motive or method noted. She's in My network, but never really communicated with her. It is amusing how some ignorant and/or passive-aggressive comments posted on her profile lean towards a christy attitude, when she identified so obviously as a Satanist!

RIP: Jeff Fenholt. [9/10/19] Never wrote about it herein even though I was aware, so here it is. Seemingly everyone in the business considered him an asshole & hypocrite, maybe even a diva {for no good reason], and according to some sources, was reticent to sing certain lyrics because of their occult references. Well, Heavy Metal / Hard Rock is NOT THE PLACE FOR THAT ATTITUDE. Satan rules music. So Fenholt just fucked off to the xian subculture where he supposedly belongs, as he could ultimately do no better. Wasted potential on the undeserving nazarene. [Related: SM Dracumentary segment] ∞