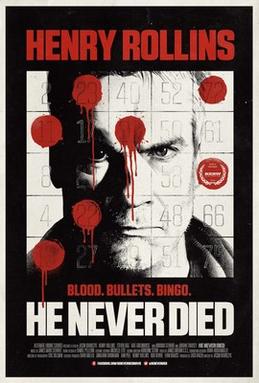 Despite how it is depicted on the ads, and the scars on his back, Cain is not an angel nor ever was. For those who don't know, he was the 1st murderer in the bible, who killed his brother Abel. For such, was condemned to roam the earth forever as the first erstwhile 'vampire'. He lives forever having to eat living meat from "sinners". At first, he had a medical student 'supplier' who provided him with fresh flesh, but when he's harassed, other more direct alternatives are necessary.

He has a daughter, and a waitress who's interested in him, but he has to keep his distance from pretty much every living human being because of his voracious appetite. But when his daughter is kidnapped by those wanting his secret of immortality, he plunges into the criminal underworld to retrieve her, dispatching all those who get in his way. Remarkable scenes include removing bullets from his body, and pulling out blades.

The only thing that seems to grant him solace is playing 'bingo' on holy ground in a church, distracting from both the monotony and the veritable sounds of Hell haunting his mind. He's followed around by a mysterious phantomesque man in black seemingly keeping an eye on his activities, making sure he lives out his condemnation as intended. It is never clearly revealed who he exactly is, but he's obviously either The Devil or The Angel of Death {Azræl}, who decides to take a worthy sacrifice in the end. ∞