The Devil You Know...

Crime documentary on Pazuzu Algarad who thrived on filth, drugs, Black Metal, and girls he called "fiancées", with a complete lack of æsthetics and waste of a house.

Harkening to the Satanic Panic, claimed to be a combination of LaVey, Crowley, and Manson. But overall, killed a couple of wastrels {probably more}, then eventually killed himself in custody. Adhered to a personal philosophical synthesis to justify unproductive, self-destructive activities.

Concludes about what happened to everyone after death. Predictably, most all seem like a bunch of addicts, one of whom even resorted to prostitution to get a fix.

Focus on a pretentious backstabber & stoolie who should have joined the other buried bodies, making claims of wanting to kill Algared {typical bigmouthed coward}, but that's after the fact. Fact is, Algared was smarter, more tenacious, ruthless, and would have laid him waste if he felt there was an actual threat.

Same goes for another pissant who actually admits to his cowardice! What's it to them anyway? That is none of their business how he runs his house, but they just wanted to use it to get high in, yet harbored these feelings BECAUSE THEY ARE AFRAID OF HIM. So they start talking big behind his back, as if he didn't know anyway! Marked by the occasion of Algared biting into a chunk of raw meat, which may have even been human flesh! Stating "Satan protects me". Of course, in his presence, they are quiet! Nothing came of it, because they are intimidated. They should feel lucky that they were not killed! Or perhaps they were soon to follow! - Sgt. D/Emon ∞

NEFARIOUS NEWS: [ITEM]: 10/28/20 - One Oscar Urias killed 2 sisters with a machete and other blades, one which was his girlfriend, in an apparent sudden rage, then proceeded to actually 'wear' the teen girl's innards around his neck! {Like Mardi Gras beads...? considering the location near New Orleans, "St. John's Parish"}. He also wounded his own brother & sister. 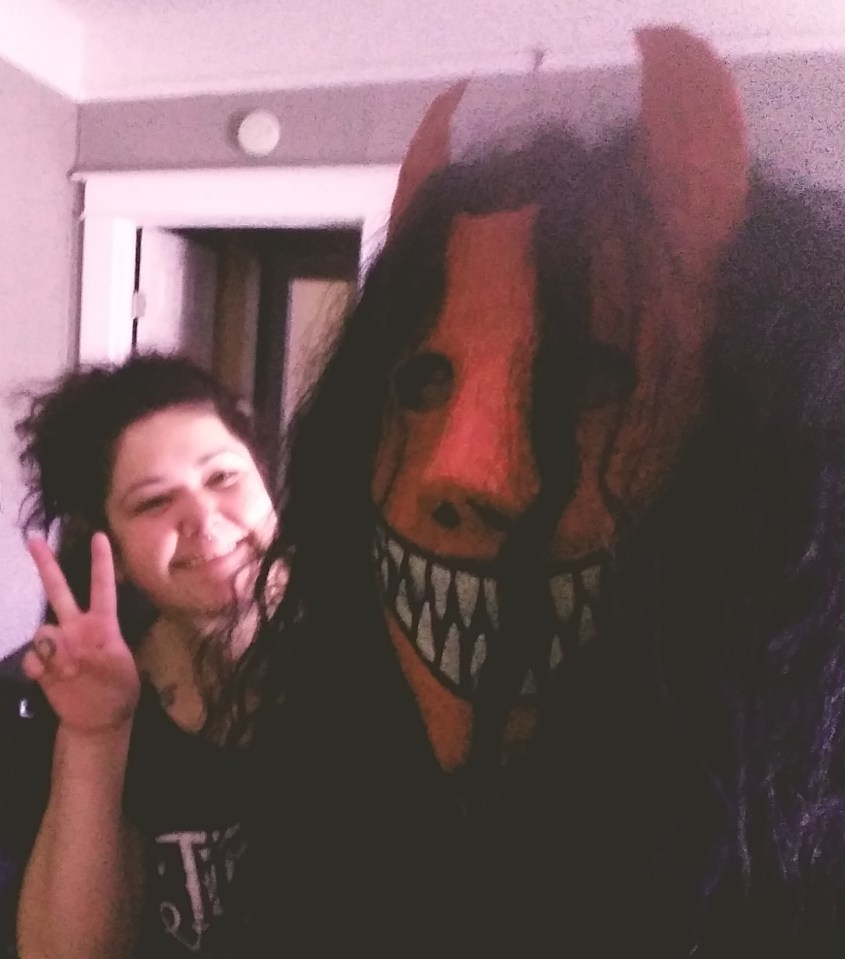 Pictured is Urias wearing a 'Shock' devil mask, from the trick-or-treating trio of Lock, Shock, & Barrel from The Nightmare Before xmas. Urias seems a curious mix of The Nightstalker Richard Ramirez and Algared.

No mention if he's involved in any kind of occult beliefs, which usually accompanies any sort of devil paraphernalia for what the newspeople know. Just a mention from the homeowner that "he looked like The Devil".

Interestingly, when a reporter asked the investigator about any motive, he mentions that they are now seeking to take a blood sample, which sounds like to establish a connection to another crime. ∞