Letters From The Nightstalker 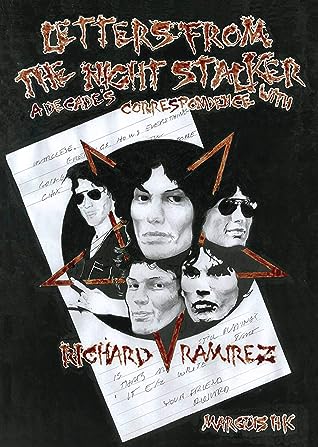 Trick or Treat! And what's in the bag at the haunted Helloween House Noctuary this year so far? Along with a plethora of indulgent infernal oblations, arrives a book from The Devil's messengers emerging from deepest darkness...

Letters From The Night Stalker by Marquis HK. A veritable scrapbook of personal correspondence, biographical crimeline, a plethora of newspaper clippings, photos, and relations with ЯR spanning a decade.

Written by an aficionado of the true crime genre and Church of Satan member, we get commentary from a Satanic perspective on this intriguing serial killer, an unapologetic, unrepentant devil worshiper reveling in the nightmarish characterization, and the veritable "blood sacrifices" of this veritable "Messenger of The Devil".

Makes a great complement to the definitive The Life & Crimes of Richard Ramirez [Carlo] & Nightstalker {Linedecker]. ∞

"As for what is said of my life, there have been lies in the past and there will be lies in the future. I don't believe in the hypocritical, moralistic dogma of this so-called civilized society. I need not look beyond this room to see all the liars, haters, the killers, the crooks, the paranoid cowards - truly trematodes of the Earth, each one in his own legal profession. You maggots make me sick - hypocrites one and all. And no one knows that better than those who kill for policy, clandestinely or openly, as do the governments of the world, which kill in the name of God and country or for whatever reason the deem appropriate. I don't need to hear all of society's rationalizations, I've heard them all before and the fact remains that what is, is. You don't understand me. You are not expected to. You are not capable of it. I am beyond your experience. I am beyond good and evil, Legions of the night - night breed - repeat not the errors of the Night Prowler and show no mercy. I will be avenged. Lucifer dwells within us all."
- The NIGHTSTALKER

My own interactions in one point separation:

I. During the "Reign of Terror" expanse, while riding our skateboards down Radford street in northollywood, a red orange toyota corolla stops in the middle of the street a block away, as a reverse cornu emerges from the darkened recesses therein. My friend, also named "Rick", goes to investigate who this may be or what they may want, returning with an ashen expression after a brief discussion with the mysterious driver. He wouldn't discuss details, but probably in the pursuit of intoxicants.
II. Sat nexto Zeena during a courtdate. Had to conceal a blade somewhere nearby in order to gain admittance into this metal detector trial. Briefly locked eye to eye with The Nightstalker. As a side note, I would spot Myself later that night in the background on the news during an interview.
III. Interactions with Musician Eva O {Christian Death, Shadow Project} at 666 High Mass & Sintennial Eve at Zen Sushi who also corresponded with Rick. ∞

Posts from This Journal “criminology” Tag