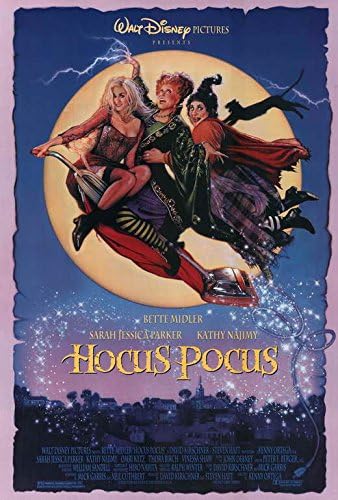 Salem, MA. HALLOWEEN 1693 - The 3 Sanderson sister Witches {Winifred, Mary, Sarah / ginger, brunette, blonde} return to their cottage house turned virtual museum to their legend, after a couple centuries, after a fiery return to The Abyss {after they try to absorb peasant boy Thackery Binx's sister Emily's lifeforce, who's turned into an immortal black cat for his troubles.

HALLOWEEN 1993: Awakened by a valley dude virgin douchebag who lit the dread black flame candle. The Sanderson sisters draw lifeforce from girls, while boys are kept in cages and/or transformed into various animals.

So like Corbis {The Devil's Rain}, the witches go searching all over towne for the stolen book of spells withat evil eye peering. Along the way they come upon a house decorated like Hell, as they meet witheir host dressed like The Devil! Of course, they dutifully pay obeisance to the King of Hell, eventually dancing with him in the evilivingroom, to the chagrin of his intoxicated wife {Laverne!}. Some trick or treaters made off witheir brooms! Curses! They have to make due with a regular housebroom, a mop, and a vacuum cleaner!

They also board a bus with a randy driver who takes a particular liking to Sarah, but leave the mortal carriage driver behind when they get to where they wanto go. {Reminded of The Craft inference "We are the weirdoes..." Indeed.}

By the by, Winnie's former lover Billy Butcherson is brought back from the grave as a zombie servant. Undead on Walpurgisnacht!

Sarah casts a spell upon the town's children to lure them to The House that they may draw their energy before dawn, like vampires, so they remain young & beautiful forever. Perfection achieved. ∞