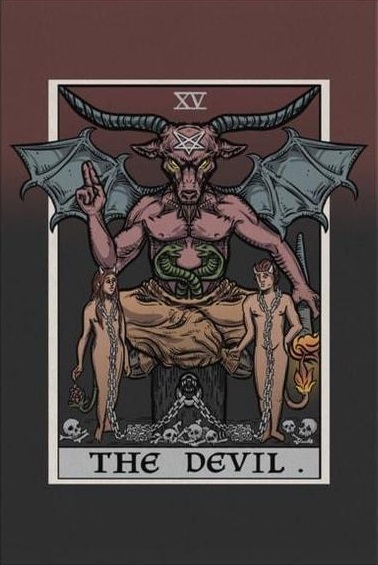 leased to receive this Hellegant notebook, to be used most appropriately for tarot readings. Satan's Tarot & other notable decks*. Though one is The Master of One's fate, according to desire and deed, the tarot and other oracles can be useful as tools to exercise the Jungian unconscious shadowside. Utilizing archetypes and metaphor to identify psychological patterns exploring the underside of consciousness, a perspective sharpening of the senses & intuition, enhancing both cerebral segments, analytical & imaginative, otherwise contemplative objects d'art & occult novelty.

For some Satanic perspective: Observing the card, one denotes that it is of course Baphomet depicted in the materialization of the Will of As Above So Below gesticulation, with the properly pointed pentagram towards Hell & Earth, & all hellements represented. Horns of mental & physical strength & fecundity of intellect and imagination, thrust aloft in defiance of blindlight theological tyranny, representative of earth. Breasts & phallus representative of Lust and desire, also fecundity and lifeblood. Wings of Lucifer, freedom and independence to do as thou wilt; serpents of water and dæmonseed of pleasure.

Those are The Lovers adorning the foot of the throne, a nubile couple, who may be Satanists considering the horns, with Satan igniting the tail of the male with the Hellfire of Lust, while her tail demonstrates the pomegranate seeds indicative of fertility, while the chains symbolize their willing allegiance to The Carnal, with a willingness to sexplore fetishistic pleasures, enhancing the delights of the flesh. ∞

_____________
* Gothic {Vargo}, Madame Endora's Fortune cards, Baphomet [Giger], Halloween, Dragon... There seems to be a tarot deck theme for just about every preference! Like sexual fetishes, just type [name] followed by tarot in a search engine, and it probably exists!

Posts from This Journal “oracles” Tag