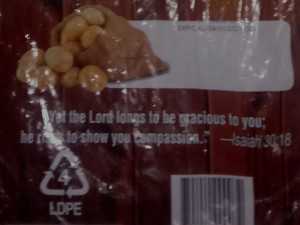 Holy shit! It has come to My attention that TJ Farms includes bible verses on their product bags! Just the other night, while preparing a repast with this bag of potato rounds, I noticed scripture included thereon! Other companies like In'N'Out [urge] which carries a salacious connotation as well as damned good food!; & of course shit Filet do this also, even though it was probably meant at the time to give the product a more folksy, peasantly appeal to attract and make the type feel more comfortable and inviting, like the "food of the people" or some such, in this increasingly atheistic society, I wonder if this may not actually work against them in the end, as in "the end times"... for xinsanity, in any case!

For some reason, it seems rather unsurprising that a company that calls itself "TJ" {as in Tijuana} would be of undesirable countenance and inferior quality! Personally, I will not be supporting this company whatsoever, so they can stick their sneaky cross where the sun done shine!

So in order to remove all traces of any blindight contamination to a perfectly good & devilicious snackrifice, a Fete Diaboli Satanic Grace is performed per meal, additionally infusing The Feast with diabolical flavor and perspective!* ∞

_____________
* Additionally, it has been scientifically studied that preparation for the consumption of food adds to its flavor, in the sense of cerebrally prepping the palate to receive multiplicitous flavor stimulation, creating a conducive situation to enhance the gustatory experience.