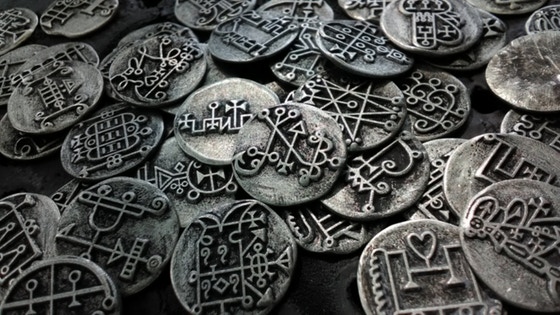 On this day in the unholy month of October, in the year of Satan LIV, did I come to possess this infernal gift, a marvelously arcane collection of amazing Goetic metal 2-sided coins, where no two rounded shapes are exactly alike, though each sigil is perfectly presented thereupon. Seemingly forged by a midevial metalsmith in pure hellfire with The Devil's very own hammer!

For those so inclined, and depending upon the seriousness and studiousness of the Sorcerer, these definitely prove useful for experimentation and/or art & conversation pieces.

Parapsychologically, as a psychodramatic stimulus of the shadowside of the psyche, these Daemonic characteristics correspond to sublimated cerebral traits brought to the fore, as an exercise of nacscent abilities lain dormant, dynamically awakened by these meditations. Darketypal zietgeists.

For the purposes of Satanic Magic, the sealing agents of the demiurgic "T" nomenclatures are removed to allow free reign unto those forces summoned as brothersisters & friends to gratify the Will, and may be added to The Infernal Names! Coins may be grasped with appropriate gesticulation, inunciation, either/or within The Chamber itself, and in the very presence of the intended target!