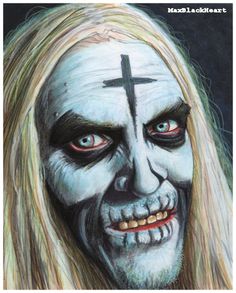 So today is what I call "Ass Wednesday" for the xians, the asses who adhere to it, which explains the fish offering, which was of course thoroughly "unblessed", made unholy, and consumed as part of Fete Diaboli! So what significance could today bring at all to Satanic consciousness? In a blasphemous sense, it could be a recognition of the beginning of the nazarene's walk towards his suicidal death! Welcomed by the weak and meek sheeple into their city to accomplish absolutely nothing! But false hope and disappointment. Palms and reeds placed upon the dirt and sand as he entered upon another ass in disgrace! Later to be capitalized upon enterprising Romans to integrate into their mytheology, religious business, and so it has been ever since! It can be seen as the sacrifice of weakness and stupidity, a gesture of defiance with a Pentagram!

Instead of fasting, eat sumptuously; instead of abstinence, partake in the pleasures of the flesh in abundance! "Sin" Well, and whenever temptation beckons!

Of course, being Wednesday {day & character}, it shouldn't be too much to ask for a splendidly salacious fetishistic display as well! Also SEE! ∞

Whenever I see stories like this about bibles not burning during a blaze, it is obvious to consider that they were obviously being preserved under a poor heat-conducting surface, petrified wooden and metal materials which finally burned away by the time the heat and flames subsided. As far as statues and crosses are concerned, these are materials that were most probably molded in kilns, able to withstand high degrees of heat, then additionally treated with chemicals to prevent complete immolation.

A similar effect may be dramatically exemplified in firewalking. Despite the psychological benefits, walking through simmering ashes upon dirt holds minimal burn possibilities, whereas if the walk occurred upon metal, there would be maximum harm and searing flesh! No miracle here, just heat-resistant materials used! ∞