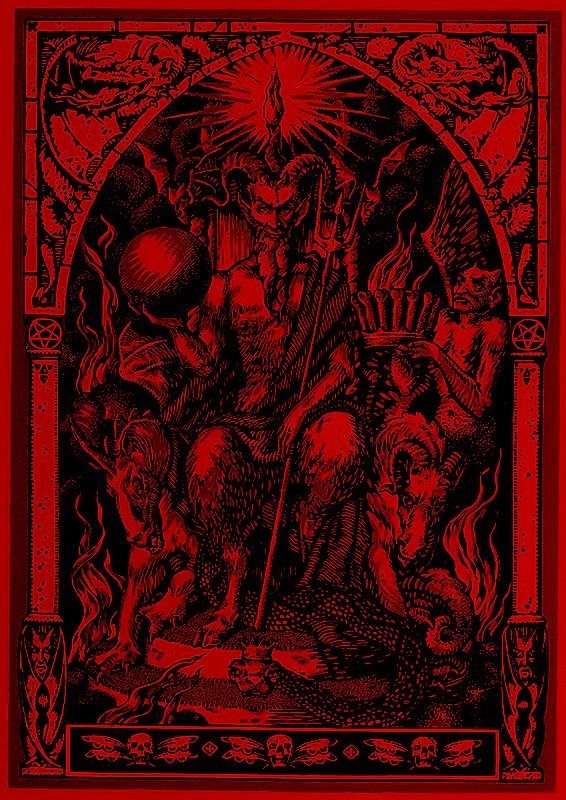 o the tune of the Unholy 666 Trifecta Tempestorm exploding in The Western horizon, blazing with the flames of The Inferno, The Draegons turn in Hellemental bliss, sup the elixir of immortality! The Draegon roars across the Abyss, shattering with Hellemental Might! Hellfire from the sky! Devil's Fog that blankets the land, in Magic & Mystery, forbidden knowledge brought up from Hell.

Feast of The Beast, treasures and pleasures sublime. For those to relish who stand with The Strong!

Behold The Shadow of The Draegon Satanas upon the Conjunction! Cosmic Forces of Darkness align to JUPITER, by lightning strike and thunder roll, bode Patron Daemons Hismael & Bethor! Come forth From The Gates! Lust & Witchcraft! LUNA/Sin/Hecate! VENUS/Aphrodite/Hathor! Succubus, Lilitu! Ride upon the night gaunts, possessed of the mind and flesh! In dreams unto materialization!

Enthroned, The Infernal One presides, Trident as Scepter and crown of black flame, gathered around, Daemons of The Pit, with Forces of Darkness swirling within and around! The Sacrifices are brought forth, cobbleskulls lead the way to the Unholy Cathedra of Shadows.

Presiding upon Infernal Throne, gazing upon mere mortals... It's already amping up for Dracmas LIV! In the week prior and following, the sacrifices are coming forth! Let the bloodshed parade begin!
1/1,2

The Patron Daemon of February is Leviathan, Draegon of The Raging Sea. Intensity of Emotion, and a Key of Magic. Also manifest as Cthulhu, Kraken, Jormungandr serpent of the watery abyss {progeny of Loki}, and all those massive creatures pertinent to the sea.

February 1st is seen in pre-Pagan culture as Imbolc, the midway point from Winter to Spring, and a feast for the impending fruition and renewal. The Patron Goddess is Brigid {a fiery redhead who I find very tasty!}, whose symbol is the seasonal cross {properly positioned like an X}, whose patronage is triple for poetry, healing, and smithery, wielding of fire to create tools and jewelry. Can also hypothetically be thrown like a shuriken, if so inclined!

The Birth of The Blackthorne Draegon, Dracmas is also known as "Candlemas Evil", because it is a day before the christian observation {they syncretized both the pagan observation date and the patron deity by prefixing "saint", using a nun and co-opting Brigid's cross to signify the crucifiction.

Posts from This Journal “dracmas” Tag