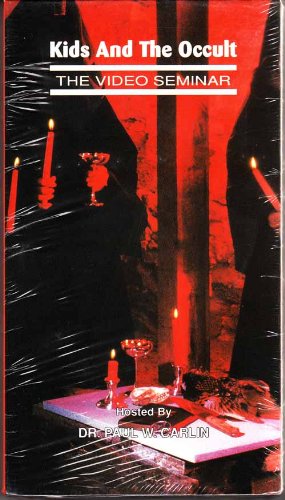 Pastor John Hagee presents Dr. Paul Carlin's occult seminar on everything from Heavy Metal {KISS, King Diamond, AC/DC, Iron Maiden, Slayer, Venom, etc., with displays of albums, video clips, and even some of the clothing worn!*}, D&D {Codex Gigax! The exercise of the imagination & intellect with elevated aesthetics of preference}, cartoons {segments from "Deception of A Generation"}, comics, horror movies {specifically The Exorcist and A Nightmare on Elm Street}, to devil worship, Crowley {'666' on a photo not a forehead 'tattoo', but a print from a book!}, some symbolic descriptions of Eliphas Levi's Sabbatic Baphomet, Satanism, weaka, Santeria, and Hitler's obsession with The Occult**. Though there are distinctions made, it's all lumped together as Satanism and the wiles of The Devil.

Notably, there are scenes of a Satanic Baptism by a Church of Satan Grotto from a news program from Pasadena, Texas.

The typical 'warning signs', which are actually indicative of an intelligent child, rather than the typical generic drone. This "consultant" advises parents to spy on and invade privacy, which will of course inspire resentment and probably drive them into deeper rebellious activities.

Of course, devil-worshipping murderers Sullivan, Ramirez, Sellers, Roland, and Kasso to a lesser extent are displayed. Of note, other little known cases are brought up, like the drug-dealer who shot a Police informant, divulged from the Ouija Board stationed at the foot of a Pentagram on the wall. And a runaway forced into a satanic cult until eventually becoming sacrificed and mutilated. A cannibalistic cult scene from Faces of Death is touted as actual footage of a ritual {which had since been dismissed by the FBI; was ironically also used by retired FBI agent Ted Gunderson! [see Exposing Satan's Underground]}. ∞
_____________
*Note: If parents grant permission for so-called "occult investigators" to enter their homes, they may confiscate, or otherwise "borrow" clothing, albums, drawings, writing, items, etc., for their presentations! Exhibits: Devin Black's vest: 1 | 2 | 3 | 4 | 5
**Discusses The Church of Satan {with a backdrop of The Satanic Bible & hardback edition of The Satanic Rituals, basic tenets referred to as "verses" instead of statements, with a focus on 1 & 7, LaVey biography}, Temple of Set {supposed "offshoot" of COS, yet was always only a flushing themselves out of undesirables}, 'Church of wicca' {various branches thereof}, Process Church of Final Judgement {which Charlie Manson was a member of; Process Church apparently believe that jesus & Satan are brothers, wherein the nazarene proclaims judgments, while Satan carries them out}; Santeria Voodoo {Matamoros bloodcult discussed}. 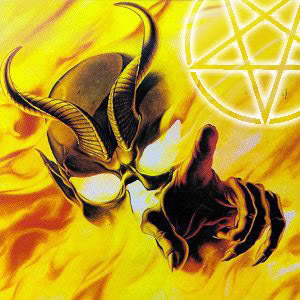 This propaganda "seminar" typifies the exhibitions presented to law enforcement agencies throughout the Satanic Panic, complete with limited research and presumptuous explanations from questionably qualified pseudo-"experts", deriving their so-called 'credentials' from inferior sources, like xian institutions & illegitimate academia with an obvious agenda. 'Cross'-corresponding & exchanging misinformation to bolster the others' with a veneer of legitimacy.

These are places that accept or promote anyone with enough of a generous "donation".

You will note that most all those who present these types of fear fodder are "accredited" in xian organizations who are inclined towards spreading their religious programming, by nepotism, and liberally dumb-down to the unqualified, thereby placing them in positions of ersatz authority they do not deserve, yet remain largely unquestioned. In this case, until debunked by superior official sources.

They identify themselves by their own assumptions. Harboring their own unaddressed & deeply sublimated mental illnesses, displacing their own fetishes onto their patients with leading questions, but who questions the "experts"? Ironically, The Devil! As has been since seen, He whom they have attempted to charge for their own crimes! The Satanic Panic essentially became the inmates running the asylum! ∞

This guy reminds Me of High School Counselor Halstead, who was a tie-in between Emon, who worked together to xerox many of My poems, diary entries/parchments/spells, and artwork, using them in such seminar presentations. ∞