Finally got around to ordering THE GREAT SATAN dvd from Everything Is Terrible! A compendium of Satanic Panic presentations with the most dramatic portions placed into a string of amusing segments! Just the beast, with all the vapid preaching removed, thank Satan! All the self-parodying, unintentionally satirical content from retarded, lame-ass xian crybabies and their hellarious propaganda! Just the amusing parts! Rather reminds Me of how I put together My SATAN tape with everything I could find Satanarama, from interviews, to movie clips, and even musick videos, making for the optimum party tape while imbibing and indulging in the pleasures of The Devil!

Via Satan/Krampus Claws, among the Satanalian Feastivities, I look forwards to reviewing it when it arrives, which should make for most amusing Solstice viewing! ∞

Arriving on Solstice, Krampus emerges with his great sack to deliver the Blackthorne copy of THE GREAT SATAN; so along with a Devil's Mountain feast of corned beef trapezoid embedded in pasta, the entertainment arrives... 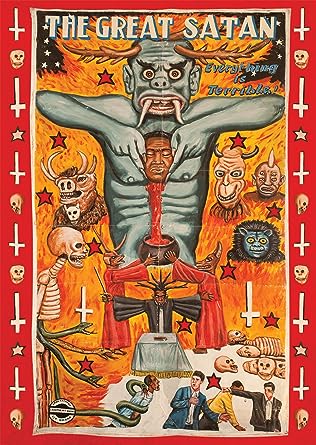 This video compendium is like taking a glimpse into a damaged xian mind riddled with hysterical Satanic Panic notions.

Along with xian cult subculture propaganda and infomercials, childrens' programming, are among a vast cavalcade of scenes spotted, including Exposing The Satanic Web, Exposing Satan's Underground, In The Name of Satan, 20/20: The Devil Worshippers, The Pagan Invasion: Doorways To Satan, Devil Worship: The Rise of Satanism, Hell's Bells: The Dangers of Rock 'n' Roll, America's Best Kept Secret: A Look At Modern Day Satanism, Deception of A Generation, Satanism Unmasked, Carman music videos, Bibleman, etc., and many more from various nascent horror movies targeted during The Satanic Panic, and naturally enjoyed by Myself.

There is no residual footage from Satanis, as was usually included on news shows.

Technology: A strange, though evocative compendium of internet instructional videos from its public emergence, including an introduction to AOL, internet surfing for seniors {remember, "...place your hand on the mouse as if you were playing a game of 'hot potato'"}, gaming, webpage building, business, computer commercials, etc.

Music: The amusing theme music video "Hail Satan" by a parody band not unlike something Weird Al would produce, followed by a collection of douchey, lame pop-tard xian music videos, musical kidshows, and disturbing segments on suicide, drug use, gang involvement, and sex. Of note, a video based on 'The Song of Solomon' with literal descriptions and props! And a homo-erotic video with a male model. TBN actually had genre programming intended for teens to try to be "upbeat" and "hip", usually on weekend nights, while early mornings were intended for little kids.

Religion: Parodies on various other religions - both their own absurd antics and those besides themselves, including the evils of "Idolatry", which for one boy filled with the enthusiasm of Rock and Metal inspirational icons and his friends; their dreams are deemed to be crushed and reprogramming installed towards the stultifying weakness of the nazarene.

ART: Emblazoned upon bright Halloween orange, cover art hand-painted in Ghana by Mark Anthony courtesy of Deadly Prey Gallery, the kind you would see serving as "marquees" traveling through various villages in Africa, and other third worlds for that matter, adorning the sides of buildings used as theaters. DVD art features a stylized Baphomet in the mode of something Robert Crumb would draw, including glueguns, videotapes, the omnipresent 666, & a truly Satanic sentiment praising The Self.

Overall, THE GREAT SATAN* is like more than a decade of blindlight fundamentalist shows were digitized from a vault of 80's & 90's VHS paranoia, for just plain invented ridiculousness. In My Hellscape, there was TBN40.

This presentation is recommended viewing with plenty of the libations, confections, and fumigations of your choice! All of course done in style!

The sad & startling thing is, there are actually sheeple like this, solely exposed to the like, who spend their whole lives within the xian subculture, viewing society and the world through ignorant holy watered-down goggles, thusly remaining mentally and emotionally stunted, if not physically as well. These drones are provided with a modicum of ersatz accomplishment & even degrees {which are moreso paid for rather than earned} which would not pass any test in legitimate, serious academic secular schools of scholasticism. Might as well have been purchased in a gumball machine!

xianity is socially acceptable mental illness. Not just for the regular xian who exists in the deathcult subculture, which instills and promotes such mental illness, harming themselves and the impressionable with a brainwashing agenda, weakening the mind and guiltripping natural desires, but also exacerbating those with pre-existing clinical paranoid schizophrenia whose symptoms emerge with christian terminology.

I know of a lady who displays christinsanity on a regular basis, talks to herself {claims via subdermal transmitter illegally implanted in her ear, which is of course a mere excuse to talk to herself using figments of her imagination, outloud}. Claims a whole network of churchway christian cultists have a conspiracy against her. Also has a Satanic arch enemy {who also seduced her husband} threatening to kill her, dispensing "pentagram people" from 'the Satan Church' who want to sacrifice her upon a pentacle! Sexual repression emerges with someone she alleges impersonates her online, digitally places images of her face on figures performing wonderfully 'sinful' sexual acts! 15" appendages are a common element! ∞

_____________
* While Great & full of Might, also commonly referred to by Islamic fundamentalists as The United States of America, from whence all these clips originate!