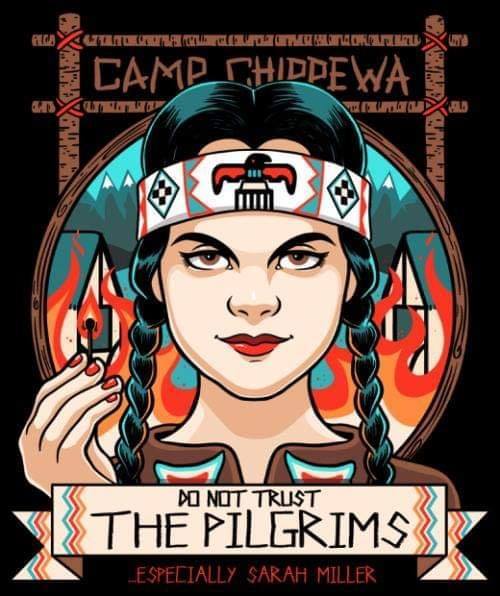 To not to participate in any group "thanksgiving" activities, as that would lend credence to this bloody remembrance and be disrespectful to the history of indigenous people. I reserve the harvest feasts for Equinox & Samhain with those of like-mind.

All those ridiculous hallmark depictions of Pilgrims sitting down with natives is hogwash. Pilgrims considered them savages and red devils, while after polite curiosity subsided, natives knew the pilgrims to be dishonorable invaders, thieves, liars, murderers, rapists, & hypocrites! This is more thoroughly discussed in a previous missive.

How about an American Native "Thanksgiving"? Knowing what we know now, perhaps this could consist of the revelers dressed as Natives, while skulls with capotains {"pilgrim hats"} array the table?

But I have a feeling that it would more or less turn out like that depicted in The Addams Family film, even though the natives were cordial, polite, and respectful, but the pilgrims, having a mandate to convert and/or enslave, would negate any amicable peaceful gathering in favor of their typical passive-aggressive, and at times, straight out aggressive tendencies. So... do not trust Sarah Miller! 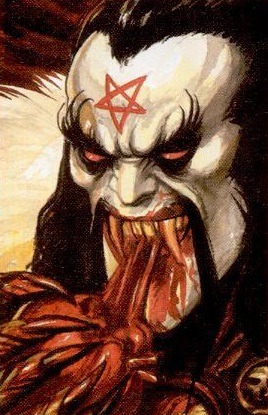 FANGSGIVING: Feast of The Beast

"Thanksgiving" with all of its goofy turkeys and lamebrain pilgrims* never really appealed to Me anyway, but most just eat aplenty out of habit and indulgence, but I can have that anytime of the year for personally meaningful reasons. The purpose of putting together such a dedicated banquet would be as a commemoration of some event, and "thanksgiving" does not fall on the radar. If I Am invited to partake by those whom I care for, I personally refer to it as "Fangsgiving" to grant perspective as veritable beasts & hunters feasting upon the decorated carcasses of their kill. But those that know Me know better.

If anything, it is more so in amused observation of those who will unnecessarily overeat, probably taking a toll on already unhealthy "diets", and following guilt complexes, the probable argumentation, combined with intoxication, possible illegal indiscretions, etc., as the herd do it to themselves. While Satanists will remain civil.

Also keep in mind that many caterers which companies employ have these dinners "blessed" by blindlight clergy, so if you are present at one of those, make sure to take some time aside and recite Infernal Grace in your mind, and perhaps sneak a Pentagram tracing. Dedicate the meal unto BEELZUBUB, Daemon of Gluttony.

Now this is My type of Fete Diaboli! Here's something to be thankful for! What one could do for hours with this treat! ∞
HAIL COYOTE! HAIL SATAN!
_____________
* What's with the belt buckles on the hats? You know what that would make them! In reality, this was not the case. The stout hats are called a capotain.RELATED: Thank The Devil, Myself | FANGSGIVING
Tags: addams family, autumn, dracling, equinox, fall, falloween, fangsgiving, halloween, herd mentality, holidays, infernal progeny, seasonal, seasons in hell, thanksgiving, the addams family
Subscribe

Posts from This Journal “fangsgiving” Tag