Satan has been the best friend the media has ever had, as he kept it in business all these years?! 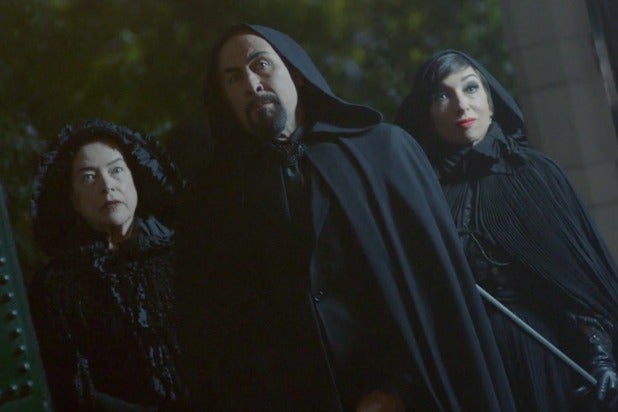 [photo: AHS - The center actor portraying LaVey while the two actresses supposedly perhaps representing Magas Barton & Nadramia?*]
"So if Evil they name Us, Evil we are- and so what?! Why not take advantage of it and LIVE!" [Evil reversed] - The Satanic Bible.

To be quite honest, I like the bit about Magus LaVey faking his death...? But as to the other elements in that ritual,** one can acquire prop hearts & fake blood in the Halloween section of the local store as well as other body parts if needed, which themselves can be employable to enhance the psychodrama of a Destruction Ritual.

Amusingly, the scene in question poignantly features the nonsensical 'alternate' {read: assimilated/poser} 'Baphomet' to those who know.

What we Satanists refer to as a virtual "sacrifice" would be in a symbolic sense upon a deserving victim through the casting of a Curse, as a result of diabolic justice. {See "On The Choice of A Human Sacrifice"; The Satanic Bible}

But that is what the herd assumes anyway, while worthwhile people of intelligence and taste will seek to educate themselves, the majority of the mindless masses will prefer horror movie scenarios. And that is what the blindlighters depend on to scare the gullible into pews. Therefore, it is best to dispense the truth to those who may comprehend it, which can be found at The Church website, though we do not proselytize, as that would be Solipsism, and casting pearls before swine, while remaining amused at the willful ignorance of the pedantic herd [see The Demystification of Satanism, The Devil's Scroll].

Though supportive of Law & Order, LaVey has also mentioned that he'd rather be in the company of killers rather than wimps, and I concur. As Satanists, we align ourselves with the most profound of Villains, and foremost rebel. The Strongest of The Strong. Though we assert the Nietzschean principle of being philosophically beyond dualistic concepts like "good" and "evil", for all is subjective, we also apply the Machiavellian principles of wile & guile, shrouded in mystery. And as such, keep the EVIL in DEVIL.

So this is the seeming crux of this latest faux pas. I can imagine Magus LaVey diabolically laughing at the herd & media over this, despite the fact that true information about what Satanism really is readily available for study on The Church's site and in publication for decades.

I wonder if there may have been a point in time where he would have found this amusing in a Halloween prank sort of way, until the Satanic Panic took its toll on society. LaVey actually wrote about an ideal parody in The Devil's Notebook under the title "Let Me Entertain You", as The Put-On.

What if the media are concocting a sort of reverse demonization effect and feel it is worth the possible litigation by purposefully misrepresenting via disinformation to gain more notoriety?

The anthology is definitely cribbing from previous superior presentations like Rosemary's Baby & The Omen, though a foppish slob surfer-type rather than a Damien Thorn. To Me, once the darketypal Lucifer liberates Himself from blindlight tyranny, he fully evolves aesthetically as well into a Gothic variant of a Demonic Angel.

Overall, along with whitelight churches, perhaps a paraphrased addendum may apply in

"Satan has been the best friend the media has ever had, as he kept it in business all these years!" ∞_____________
* Description from the wrap: "Anton LeVay (Carlo Rota) and his two Cardinals of the Church of Satan (Kathy Bates and Naomi Grossman". 1. LaVey misspelled as "LeVay"; 2. We do not have "Cardinals" degrees.
** DEMON FOOD! I personally enjoy eating the cooked hearts of animals slaughtered for food in blood soup - from chickens to turkeys to pigs and cows, if I can get it - it has become sort of a delicacy, not to mention combined with literal entrails as menudo.Recommended reading
Tags: anton lavey, anton szandor lavey, archetypes, blindlighters, church of satan, curse, halloween, horror, iconography, infernal empire, metaphor, multimedia, nefarious news, psychodrama, sacrifice, satanic panic, social commentary, social observation, spechtreum, symbolism, thriller
Subscribe