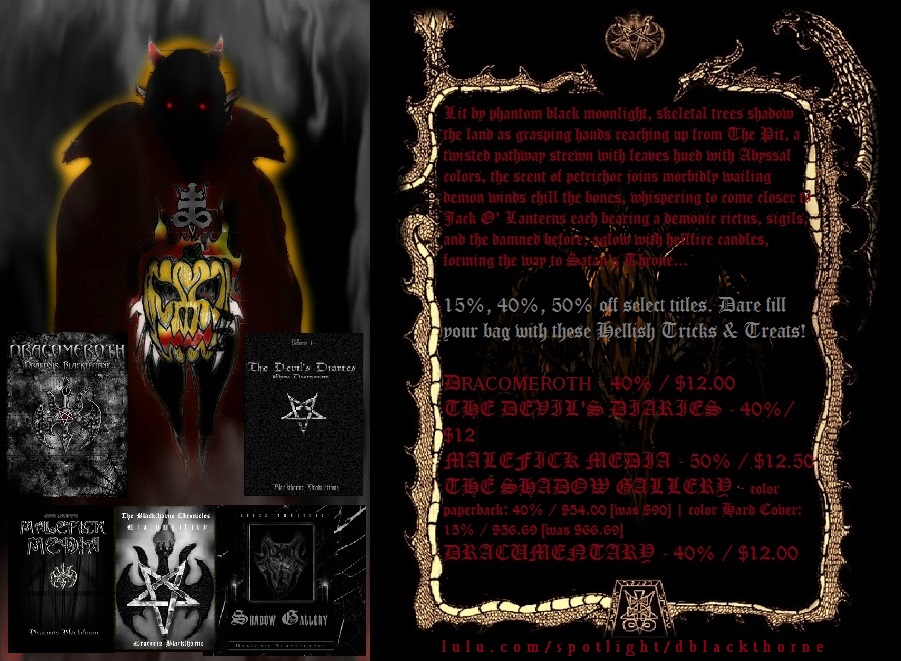 Lit by phantom black moonlight, skeletal trees shadow the land as grasping hands reaching up from The Pit, a twisted pathway strewn with leaves hued with Abyssal colors, the scent of petrichor joins morbidly wailing demon winds chill the bones, whispering to come closer to Jack O' Lanterns each bearing a demonic rictus, sigils, and the damned before, aglow with hellfire candles, forming the way to Satan's Throne... 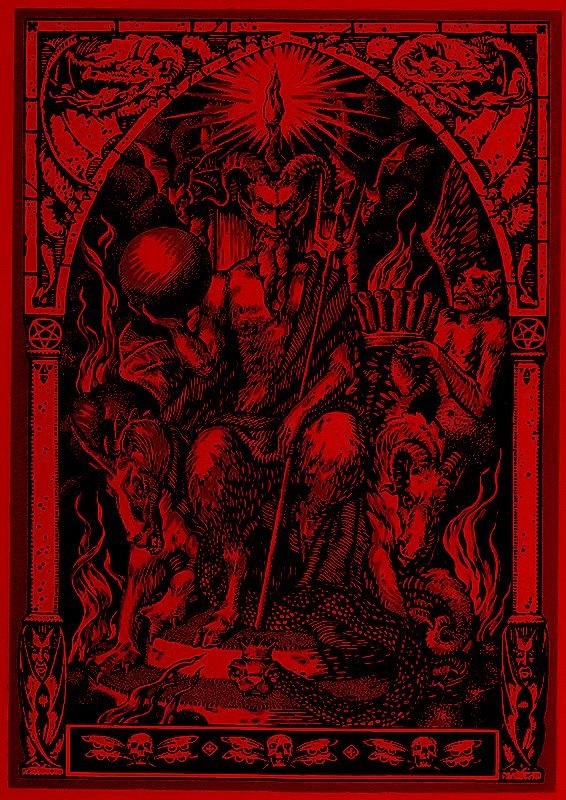 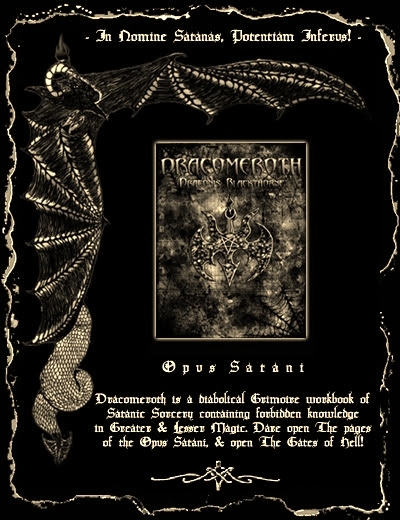 Comprising several books in one tome, Dracomeroth is a veritable Satanic Grimoire serving as inspirational psychodramas for Self-Transformation, Empowerment, and Diabolical Evolution.

Encompassing the complimentary Carnal with the Magical, included herein are The Draconian Dictums, Sins, The Infernal Alignment, Keys to The Infernal Realm, The Rites of Omnipotence, Satanasutra, Vampiricon, Glossary of Spells, Visualizations, Philosophy, Legendry, & proven techniques of psychological manipulation.

A Workbook of Sorcery presented in a highly imaginative & stimulating style, this text is intended for those courageous enough to peer into the deepest darkness of their own psyches, the vast Abyss within, and exercise one’s own Magical potential to the furthest degree, in a continual process of actualization unto the incarnation of Satan Oneself. Cooperating with Shadow Forces nascent in Nature in a structured form to ascend the levels of Satanic Grace, advancing one’s absolute Godhood.

Walking In The Shadows...

The Daemon calls, The Black Flame burns fierce! Open the pages of the Opvs Satani, and open The Gates of Hell. So It Is Done. ∞ 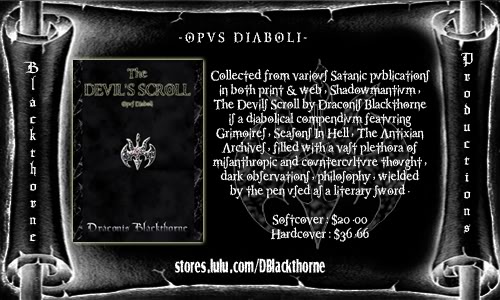 The infamous writings of Warlock Draconis Blackthorne are collected in this tome from several sources including Noctuary, The Devil's Diary magazines, The Blackthorne Chronicles, The Shadowmantium, & various Satanic publications in both print and web. The 2nd edition is an expanded diabolical compendium segregated into several sections, filled with misanthropy, social commentary, dark observations, Satanic philosophy, polemic, & blasphemous counter-culture thought by the pen used as a literary sword. In his distinctive style, Blackthorne is a prolific writer, artist, poet, Satanist, Martial Artist, member of the notorious Church of Satan, Founder of The Order of The Black Dragon, President of Blackthorne Productions, Host of The Haunted Noctuary, & video director for several short films, He has appeared in several multimedia presentations, including TLC & Discovery's 'Pact With The Devil' for The Infernal Empire. 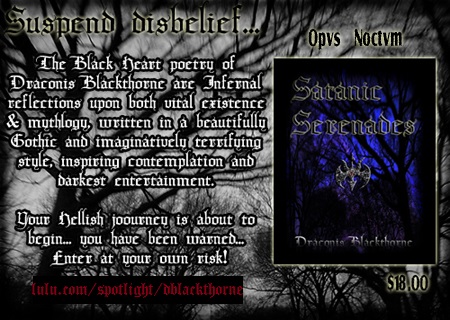 Opvs Noctvm: Satanic Serenades are Infernal Reflections upon both vital existence and mythology, written in a beautiful, sometimes terrifying polemical, imaginative Gothic style, which inspires contemplation and darkest entertainment. Both fictional and non-fictional concepts are contained herein as veritable “diabolical psalms” for those who resonate to The Satanic perspective, and appreciate the sinister aesthetic. Divided into several sections, the black heart poetry of Satanic Serenades features odes, observations, and experiences which will manifest the Dark Side of the mind. Also features The Legend of Haunted Devil’s Canyon, a poetic horror anthology based upon frightening urban legends.

Suspend disbelief, relax in your blackened candle-lit chamber, as the night unfolds, the fog rolls in, and be taken into a Theater of Nightmares and Shadowy Dreams.

Your Hellish journey is about to begin... you have been warned... Enter at your own risk! 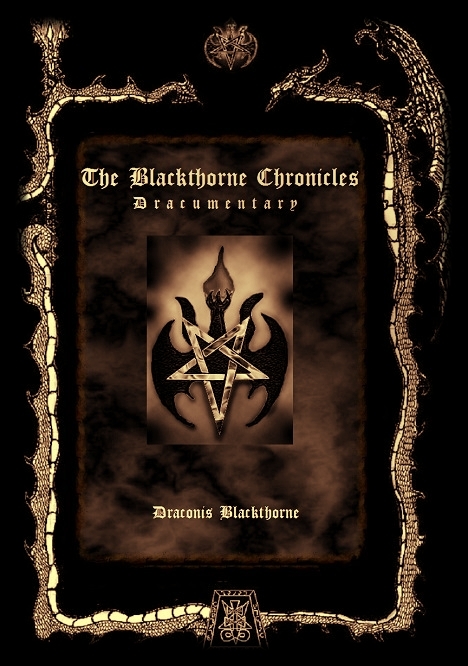 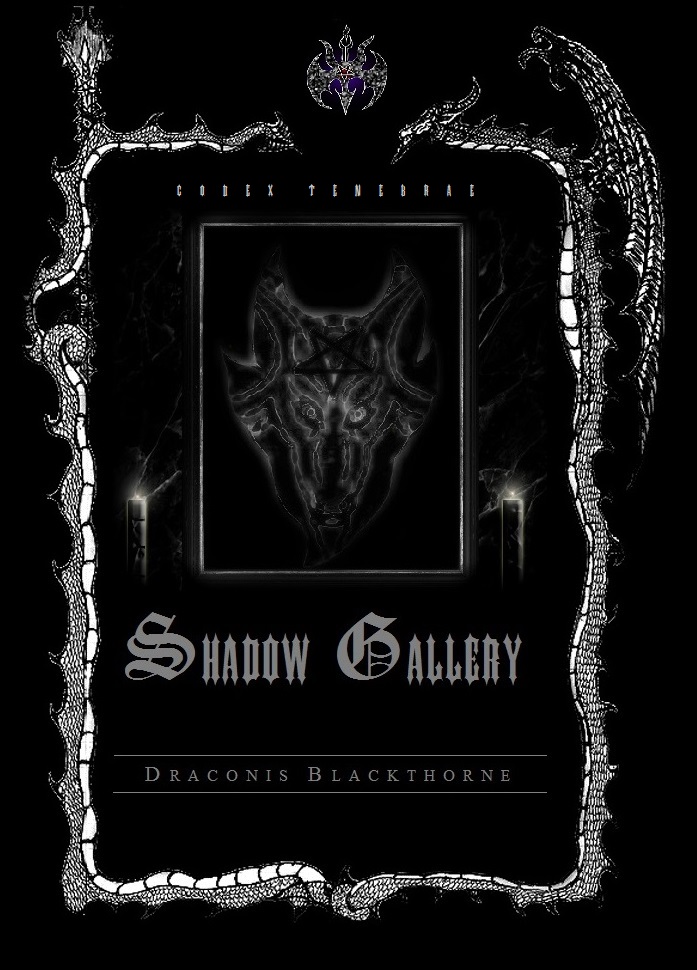 Satanic Devilutions
Over 230 full color framed archetypal illustrations are featured herein this diabolical photo book, detailing a myriad of nefarious metaphorical & occult concepts in a psychodramatic Horror-oriented style. This truly Wicked Tome contains a plethora of Traditional Drawings, sketches, and technomantic photo-manipulations, mixed media, complete with descriptions and story lines from cover to cover of infernal visions into the Abyss of the Shadow Side of the mind.

A Word of Warning

Dare you step inside this tenebrous gallery of terror-filled delights, the observer will be exposed to all manner of transitional blasphemy, stimulating lusts, morbidity & death, and invigorating Strongest Life.

A Gateway to Hell

Candle light flickers in the gloomy chamber, strange shadows move in the darkness, behold specters appearing in the looking glass, reflecting dread nightmares and dreams, taking form in this atramentous atmosphere, merging as one. Gaze into this black mirror, to possess and be possessed... ∞ 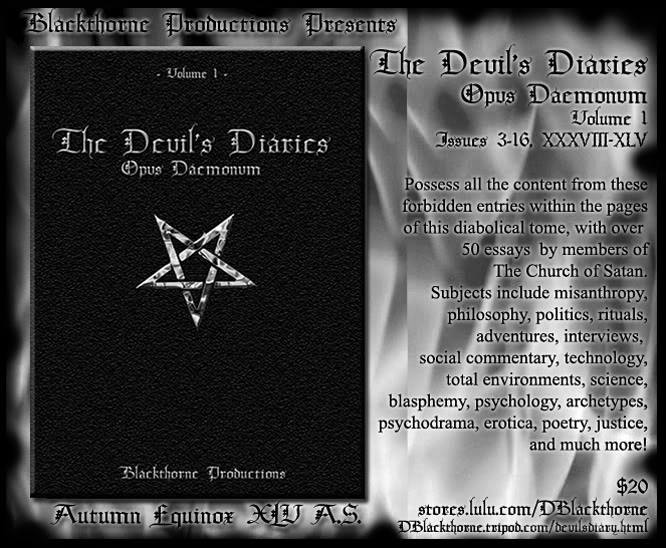 Volume 1: Issues 3-15. XXXVII-XLV A.S. Over 50 essays by members of The Church of Satan. Now is your opportunity to possess all content in these issues in one book. Includes extra material not previously published. ∞ 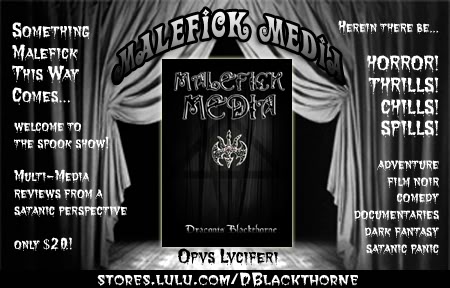 Something Malefick this way comes...

So named Codex Lvciferi for The Prince of The Power of The Air, as these sinister transmissions are cast upon the ether for timeless visual & audial mutual gratification. Arranged in playlist style complete with Acts, Scenes, Intermission and Finale, please be seated as The Infernal Orchestra prepares you for an entertainment adventure into several genres of diabolical amusement.

Anticipation grows as the lights dim, the black curtain parts... fantasy & reality become obscured, light and shadow dance upon screen & stage, joined by the haunting & inspiring music of the night... ∞