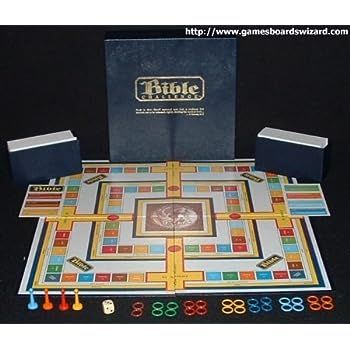 Claims to be like a book you could place in your shelf {Not MY Shelf!} with the cover resembling a big fat moldy babble someone could foreseeably cheat with, using it like a podium to get to that next line on the wall. Material used to replicate a leatherbound tome, and Old English script for the title on the box and cards.

What amused Me right off the pink bat are the positions of the crosses - the nearest one before the player looks INVERTED, and stems straight from planet earth! Now immediately, what this tells Me is that Satan rules The Earth, just as they mention in their very own scriptures {even though some irrelevant verse is written around it}, and We assert in Ours.

Then there are the game pieces... Again, the phallic symbolism emerges with several multi-colored long pegs upon which a player is to place a ring, just a game of ring toss {'dolt version; cockrings, donuts or onion rings optional}, or slipping on a condom {testamint flavor!} And the hand f*ing gloryhole! Or it may more accurately [look like this]!

Praise the 'Lord' of The Rings?

Rules include starting at the red spot that would be the nazarene's bloody feet & toss the die to see how many spaces the player goes around the board. A question is asked according to the matching color, spanning Old & New Testaments. Just odd bits of trivia, from simple catechism to obscure details that may take a bible scholar to answer. I suppose that whomever amasses the most rings wins - so who will be the ultimate "'Lord'of The Rings"?

Ironically, the game reminds of casting lots for the nazarene's garments.

No "prizes" provided, so it is recommended to play with wine & crackers, dip & cheesewiz. Perhaps played in priest & nun outfits for fetish play with special requests. The game suggests accompanying with a bible relic on hand, which if so inclined, may provide nice BBQ hellfire fuel, or back to the Historical stuporstition folktales reference section in the Librarium.

I also became aware that this board game actually has a show as well called American Bible Challenge, hosted by redneck comedian Jeff Foxworthy {whose secular, vulgar, & carnal routines are notorious for playing on the lowest common denominator}, I suppose realizing the huge draw such peasantly subject matter attracts like flies on sh*t, and from whence many of the type derive their shortened names. I've seen nuns on there too, whose first prize should be getting rid of vestigial constraints in favor of The Devil's sweet lasciviousness.

Overall, this game reminds Me of something characters in the film $AVED! would regularly play, and other such sheeple. ∞

Posts from This Journal “games” Tag