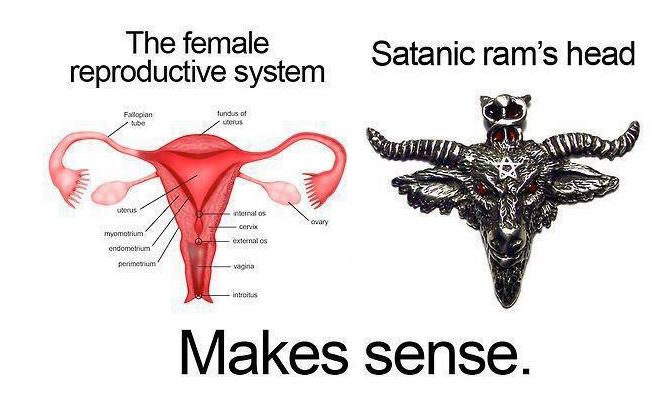 Satan represents indulgence, instead of abstinence!
I Satanic Statement

This vile canard had been circulating here and there, and thought The Devil should address this. It goes as follows:

That's the devil's doorbell and if you keep pressing it, soon enough he will answer."

That's a terrible lie from the fetid heavens! The same type of judeo-xian-islamic theocracy-fueled attitude that would justify & encourage genital castration & mutilation! Bris milah is not too much better!

Obviously written by some sad self-hating prude, who desperately needs to get laid; and since they are miserably repressed, attempt to make everyone else around them like themselves as well. Indeed, the clitoris has evolved to become the primary sexual pleasure center / erogenous zone of the female anatomy. In which sense, the term "Devil's Doorbell" is appropriate, whose very purpose is to illicit pleasure, enhancing coital activity to be a luxurious indulgence tapped into as often as possible.

Dialing The Number of The Beast

It could be posited that the door number outside the doorway is a 666 & 9, 6669, and/or the traditional 69* as in manipulations in circular motions to stimulate the desired outcum.

By the way, it is the uterus that is meant to create a child, not the clitoris, whose purpose is pleasure, so when The Devil answers, that's an orgasm, and everyone loves that!

_____________
* Pisces, Libra; The Lovers; The Devil - The Lovers accepting their natural carnality, with the knowledge of The Flesh, reveling in their fetishes at the trapezoidal base. "Sinning" well in Hell at Satan's Throne!
Tags: 666, 9, erotica, indulgence, metaphor, number of the beast, pleasures of the flesh, psychology, satanasutra, satantra, seduction, sensuality, sexology, sexuality
Subscribe

Posts from This Journal “satantra” Tag