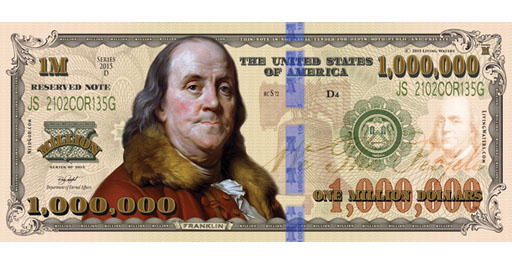 [Covetous fundamentalist businesses are charging up to $7 for these tracts]

Lo & Behold! All this is fraud!

So I came across one of these propaganda tracts recently, and find it terribly amusing, considering the fact that it features none other than veritably "Magister Franklin", an avowed member of The Hellfire Club, an infernal fraternity founding the first Satanic Republic of America, which was by no means founded on any particular sect of xianity or religion, but whose original premise was for a democratic country, not a theocratic government from which these settlers were escaping from their native lands.

Ironically as well, is the "letterhead" atop the reverse side of the bill that reads "In G*d we trust" was not approved nor in place during Franklin's presence, but applied much later in the mid-20th century for manipulative political & societal purposes, and should be summarily removed by this time.

Although the fact that this tract is appealing to greedy proclivities confirms their own typically hypocritical sanctimonious avarice, but definitely should not be displayed by any secular-sponsored institution. ∞

Posts from This Journal “fundamentalism” Tag